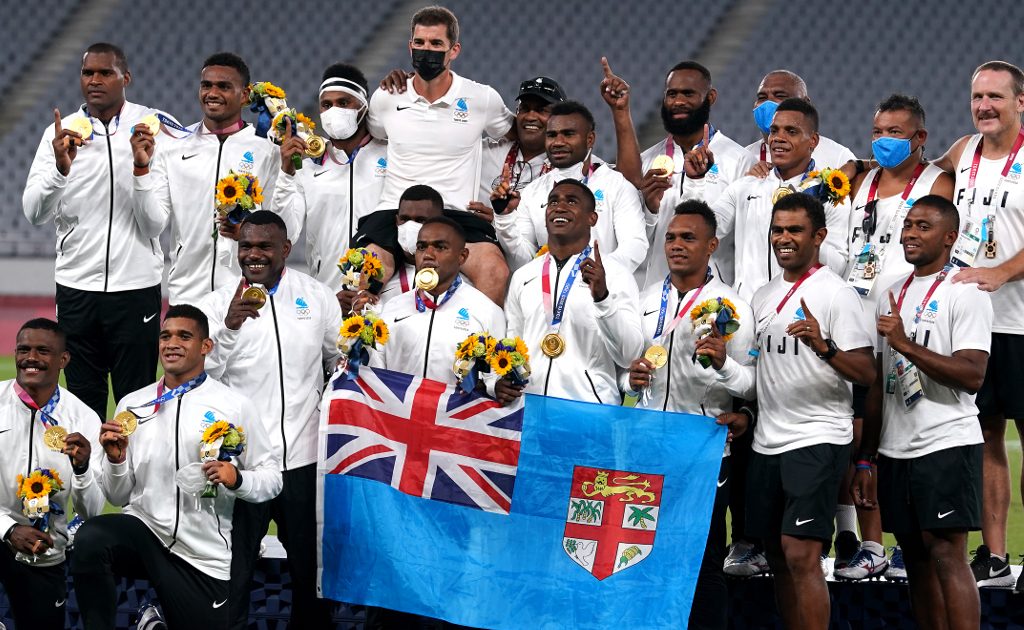 The defending champions raced into a 12-0 lead against the All Blacks Sevens as Meli Derenalagi and Sireli Maqala touched down in the opening three minutes.

Scott Curry crossed for his fifth try of the tournament to get New Zealand on the scoreboard but Jiuta Wainiqolo touched down before the break to cancel out that score and give Fiji a 19-5 half-time lead.

New Zealand crucially scored the first try of the second period, as Sione Molia broke free of the Fijian defence to touch down, but that was as close as the All Blacks Sevens would get.

Asaeli Tuivuaka grabbed Fiji’s fourth try of the match and with time running out Waisea Nacuqu made sure of a second Olympic title when he successfully converted a penalty.

Argentina, who were beaten 26-14 by Fiji in the medal semi-finals, took their place on the final step of the podium after they beat Great Britain 17-12 in the bronze medal final.

Great Britain had lost 29-7 to New Zealand in the semi-finals, but opened the scoring in the first minute when Ben Harris crossed for his fourth try of the tournament.

Argentina hit back in the fifth minute when Lautaro Bazan Velez touched down, before Marcos Moneta produced a dazzling step to score his sixth try of the tournament and ensure his side led 12-5 at the break.

Ollie Lindsay-Hague got Great Britain back on level terms midway through the second period, but Argentina were soon back in front and Ignacio Mendy’s breakaway try ultimately secured the bronze medal.

South Africa recovered from the disappointment of losing their medal quarter-final to Argentina on day two to wrap up fifth place at Tokyo Stadium.

Ronald Brown was the hero in the Blitzboks’ fifth-place semi-final, as his two tries helped his side hold off a second-half comeback from Australia and seal a 22-19 win.

Victory set up a fifth-place play-off against the USA, who had earned their spot in the match with a see-saw 21-14 defeat of neighbours Canada. Carlin Isles’ late try proved decisive.

It was South Africa who controlled the fifth-place play-off, however, as tries from Justin Geduld and Sakoyisa Makata gave their side a 14-7 lead at the break.

The Blitzboks made sure of the win in the closing stages as Kurt-Lee Arendse and Stedman Gans crossed the whitewash to confirm a 28-7 scoreline.

Australia ended their tournament on a high against Canada, running in four tries to seal a 26-7 victory and seventh place.

Nathan Lawson opened the scoring in the second minute, and after Connor Braid had replied for Canada, Lachlan Anderson crossed to give Australia a 12-7 half-time lead.

Nick Malouf and Lachie Miller scored in the second period and although Dylan Pietsch was sent to the sin-bin late on, Australia were able to see out only their second win of Tokyo 2020.

In the opening match of day three, hosts Japan recovered from 7-0 and 12-7 down to record their first win of Tokyo 2020 and condemn the Republic of Korea to 12th place.

A yellow card for Andre Jin Coquillard, who had opened the scoring, on the stroke of half-time proved decisive as Ryota Kano and Chihito Matsui crossed either side of the break to give Japan a 26-12 lead.

Jose Seru and Jang Seongmin were both sent to the sin-bin in the second period before Kazushi Hano’s late try put the seal on a 31-19 win for the hosts.

Ireland had missed out on a place in the medal quarter-finals despite beating Kenya 12-7 in the pool stage, but they had no answer to the Shujaa Sevens in the ninth-place play-off.

Johnstone Olindi scored the first try of the match at the end of the first half, and the Kenyans ran in three further scores in the second as Jacob Ojee, Willy Ambaka and Daniel Taabu all crossed the whitewash.

Kenya captain Andrew Amonde’s final act on an international sevens pitch was a missed conversion in front of the posts, but it mattered little as his side won 22-0.