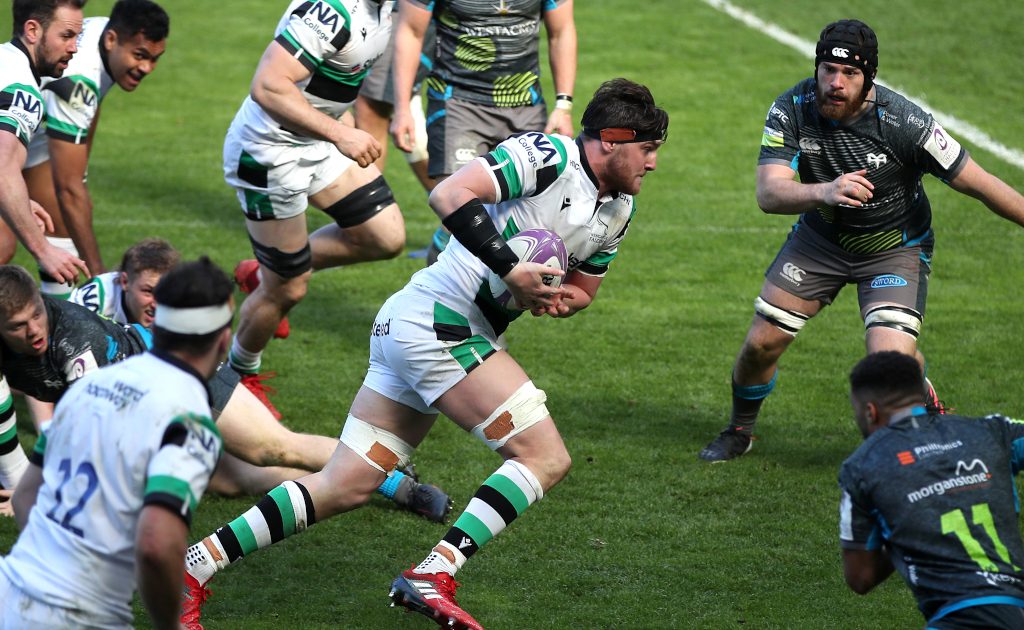 Newcastle recovered from 14-0 down to claim their place in the quarter-finals of the Challenge Cup with a thrilling 28-24 win over Ospreys.

Northampton also went through as they came from behind to snatch a dramatic last-gasp 43-39 win over Dragons at Rodney Parade while Leicester saw off Connacht 48-32 in another high-scoring encounter.

Newcastle’s success at the Liberty Stadium came against an Ospreys side boosted by the return of six victorious Wales internationals following the Six Nations.

The Welsh side started superbly with early tries from Keiran Williams and Dan Evans but indiscipline cost them as the Falcons levelled at 14-14 before the interval.

First Justin Tipuric was sent to the sin bin for a professional foul and the visitors capitalised as prop Trevor Davison forced his way over.

The Falcons were then awarded a penalty try after an attacking maul was illegally collapsed.

With Adam Beard becoming the second Ospreys player to be shown the yellow card, Newcastle took charge after the break with Sam Robinson finishing off a fine move.

Philip van der Walt added another to make the game safe despite a reply from Tom Botha.

Tom Collins was Northampton’s late hero as Saints recovered from a 22-3 deficit to edge out Dragons in an 11-try spectacular.

Collins touched down with 74 minutes on the clock, just moments after team-mate Taqele Naiyaravoro had claimed his second, to cap a brilliant fightback.

Dragons had powered ahead with two Ashton Hewitt tries. Matthew Screech, Sam Davies and Leon Brown also crossed for the hosts but Naiyaravoro, Ollie Sleightholme, Alex Mitchell and Teimana Harrison responded before Naiyaravoro and Collins had the final say.

Leicester meanwhile held off a Connacht comeback to reach the next round.

The Tigers fell behind to a Kieran Marmion try but hit back with four touchdowns of their own before the break through Charlie Clare, Guy Porter, Matias Moroni and Zack Henry.

Eoghan Masterson, Alex Wootton and Paul Boyle went over as Connacht rallied but further tries from Clare, Harry Wells and Jasper Wiese ensured the Tigers had too much.

Also through to the last eight are Italian side Benetton, who overcame Agen 29-16 in Treviso.