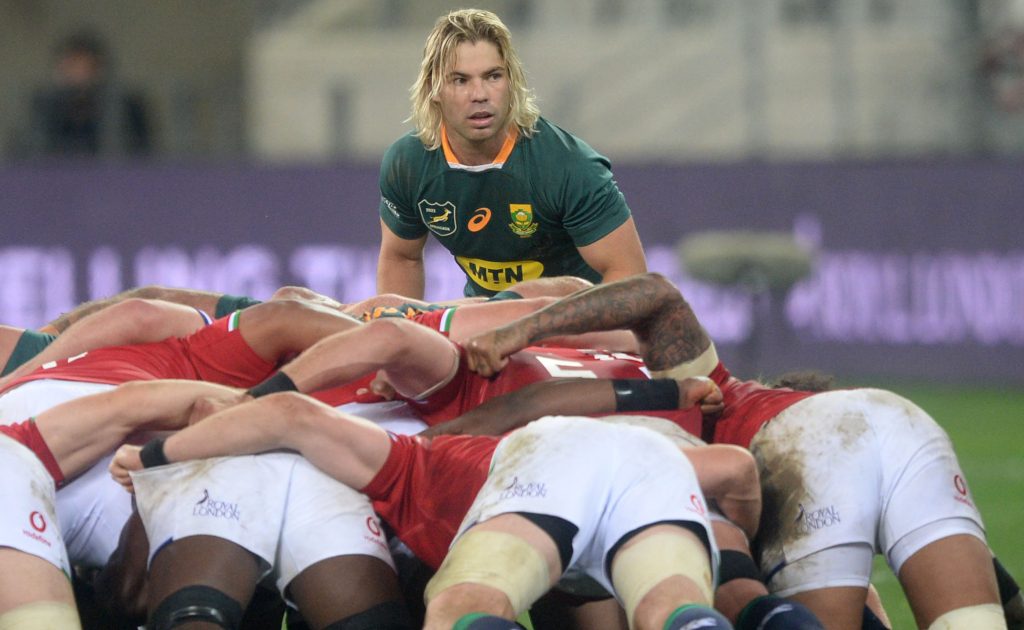 Faf de Klerk has warned the British and Irish Lions to beware the “wounded” Springboks fighting their way back into an already compelling Test series.

The Lions turned a 12-3 half-time deficit on its head for a 22-17 first Test win in Cape Town on Saturday, stunning their world champion hosts.

Luke Cowan-Dickie’s driving maul try, 14 points from the boot of Dan Biggar and a match-securing penalty from Owen Farrell shocked the Boks, who faded as the contest wore on.

South Africa scrum-half De Klerk has insisted however that the frustrated home side will not accept any repeat when the teams meet again for the second Test next weekend.

“We are a proud team, a proud nation, we definitely will make sure we rectify the errors that we made,” said De Klerk.

“That’s pretty much it, we’ll definitely come back with a bit more fire in our belly.

“A bit more anger, but we need to control the anger to make sure our discipline is in check.

“If our discipline is good and we can sort out our aerial battle, we should be all good going forward.

“It’s going to be another massive challenge next week, but we’re looking forward to it.

“We’re wounded Springboks, we like having our backs against the wall and we can fight our way out of that.”

De Allende’s chalked-off score raise little debate, due to a knock-on in the build-up from Cheslin Kolbe.

South African Marius Jonker’s presence as TMO had enraged the Lions, with World Rugby unable to provide a neutral official after New Zealand’s Brendon Pickerill had to withdraw due to Covid-related travel problems.

But it was Jonker who thwarted the Boks over Le Roux’s rejected score, and the scrutinised TMO was also satisfied a tackle from Hamish Watson merited merely a penalty and no stronger sanction.

The Springboks coaches refused to question any of the refereeing calls on the night in a mature response, and De Klerk insisted South Africa must not seek to explain away their loss.

Just one tweet about yesterday's Rugby. On another field, in another country (with a French ref perhaps) that spear-tackle on Willie le Roux would have brought out the red card. And it happened right in front of the ref!

“They are a quality side and the challenge for us, from a Lions point of view, is that the guy that comes off the bench is probably better or just as good as the guy that’s playing,” said De Klerk.

“That’s the challenge we have to face, our discipline slipped in the second half.

“If we could replay the first five minutes of the second half it would probably be a different outcome. A really close game, a few decisions maybe, not wrong but could have gone either way.

“We’re very disappointed in the changing room, the boys are really gutted.

“It’s a three-Test series, so we need to hold our heads up high. There’s a lot of guys who haven’t played for a long time, it was great to be out there with the boys again.

“A lot of learnings, but there can’t be any more excuses. We have to take this on the chin and move forward.”