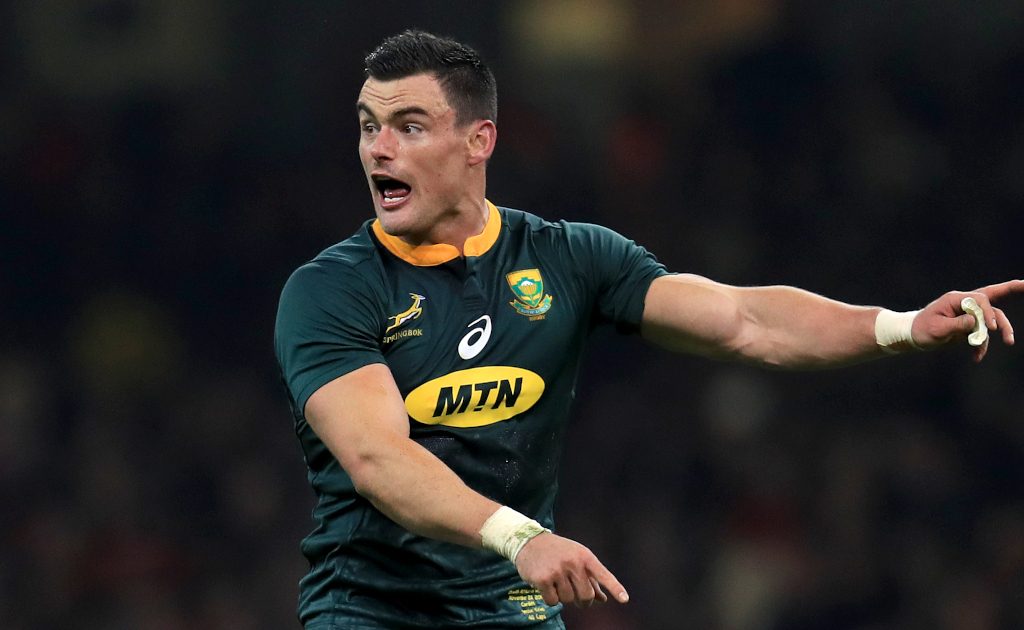 South Africa centre Jesse Kriel has revealed why the prospect of taking on the British and Irish Lions this year is extra special for his family.

The 27-year-old, who is approaching 50 caps for his country, was included in the Springboks’ 46-man squad on Saturday after an impressive spell with Canon Eagles in Japan since he recovered from a hamstring injury which ended his World Cup prematurely two years ago.

Kriel is the second person from his family to have featured in a Lions series after following in the footsteps of his great grandfather John Hodgson, who was a member of the Lions party which travelled to New Zealand and Australia in 1930.

Special to be involved

He said: “My great grandfather actually played for the Lions so it is quite a personal one for me and it is special to be involved.

“Also I think if you go back to 2009, I was still in school and have some great memories of that and Morne Steyn kicking the penalty over (to win the series).

“It is great to have a guy like him in the squad, so it’s very special and this opportunity really probably comes only once in a player’s career, so everyone will try to make the best of it.”

Former Bulls back Kriel recalled some of the tales he had learned about his Gosforth-born great grandfather, who took part in a Lions series which consisted of 29 matches with the first taking place in Wanganui on May 21 of 1930 and the final fixture occurring in Colombo on October 1.

Northern forward Hodgson played in 15 games and was unable to stop a 3-1 series loss to New Zealand while a solitary meeting with Australia saw the Wallabies prevail by a 6-5 scoreline.

“It does meant a lot, it means a lot to my family and it will be really special hopefully,” Kriel said while at the Springboks conditioning camp in Bloemfontein.

“I was speaking about my great grandfather the other day with my brother Dan and it is small stories, like how they even went on tour.

“They toured New Zealand for their British and Irish Lions tour and they were on a boat for a couple of months sailing across to get there and we’ve heard how they had drinks on the boat, the good times and different things they did.

“They had to write letters back to the family, whereas these days I get on a plane and the next day I am back in South Africa. Those stories are things which are quite cool and some of the memories I enjoy when I look back.”

Kriel could be forgiven for having unfinished business on the international scene after an injury curtailed his World Cup in the group stage, but the coronavirus pandemic has meant South Africa have not played a Test since beating England to win the Webb Ellis Cup at the end of 2019.

Head coach Jacques Nienaber has included all of the World Cup-winning squad, except for the retired trio of Tendai Mtawarira, Francois Louw and Schalk Brits plus the injured Warrick Gelant, in his group while five members ply their trade in the much-maligned Japanese Top League.

Cape Town-born Kriel hinted the two warm-up Tests with Georgia will be crucial for preparation ahead of the Lions series, which commences on July 24.

“I had given everything I wanted to give up until the point I got injured at the World Cup and after that we were still part of the team and able to contribute, so it’s not unfinished business. It is a new competition and challenge,” the Canon Eagles player added.

“With Japan, yes a lot of people question the physicality but there are a lot of foreign players over there who are physical.

“I think 99 per cent of the people don’t know about all the Tongans or Ireland boys running around. They are not small so there is a bit of physicality happening over there.