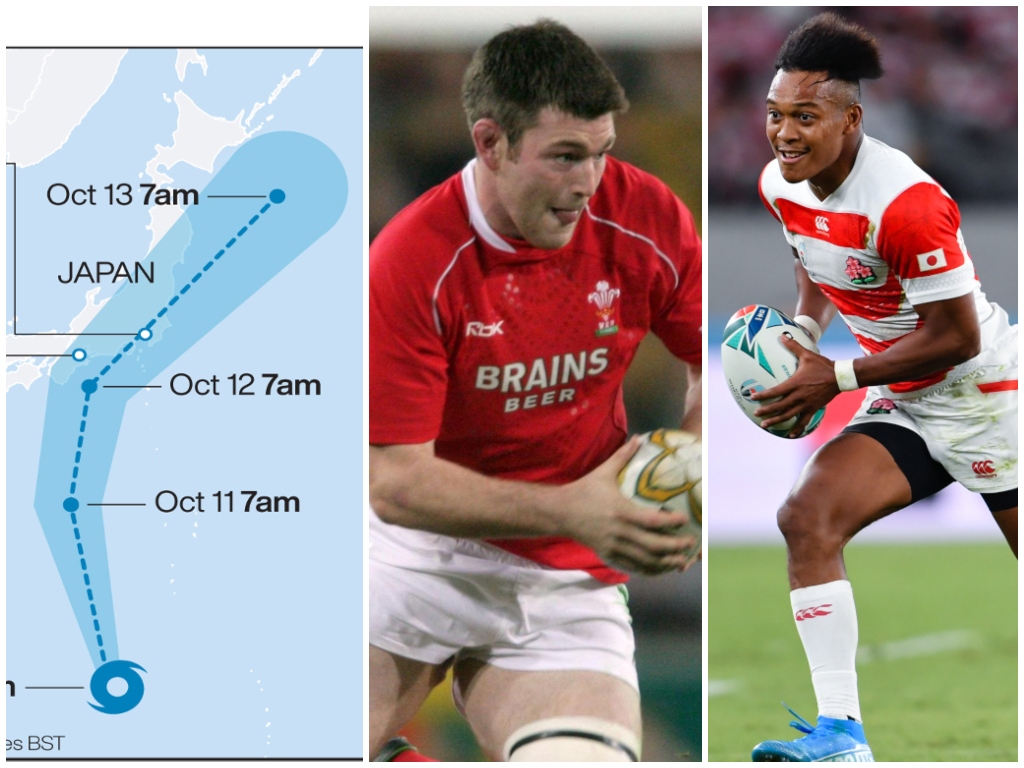 As the Rugby World Cup falls foul of the weather, former Wales skipper Michael Owen rejoins Expert Witness to unpack some of the big talking points in a week filled with controversy, disruption and Welsh excellence.

When we started writing this column 24 hours ago, the status quo was slightly different to where we find ourselves now and a few nations are going to be a little disenfranchised with the outcomes of the match cancellations.

There are arguments to say this was unavoidable; public and player safety is, of course, paramount. There are others that might say that with the typhoon season in full bluster, there needed to be a contingency within the tournament rules to allow flexibility in situations such as these. In short, plan B appears to be missing.

However, reacting to implications of the situation is more important that worrying about the calls World Rugby have made; they are what they are and there’s little the players or team management can do.

It is a difficult situation but when you unpack the outcomes, provided the Scotland v Japan game does go ahead, the ‘results’ will go as people thought they would and the only thing that’s been lost is game time. Sometimes that can be a priceless commodity but only time will tell.

Those implications are in two distinct categories: the actual qualifications and then the preparation for the knockout stages, so let’s examine them.

As I write, Scotland versus Japan appears still to be on, subject to a final decision on Sunday morning. This game will decide which two of three teams (Japan, Scotland and Ireland) progress from this pool to face either New Zealand or South Africa.

Ireland’s game against Samoa will go ahead on Saturday. If Japan lose to Scotland by more than seven and fail to get a try bonus-point, and Ireland beat Samoa, then Japan are out. You’d expect Ireland to win and go through, meaning Japan and Scotland are playing for the right to join the Irish in the last eight. If that game is cancelled and Ireland don’t lose to Samoa without getting a bonus-point, Scotland are out.

This was the powerful typhoon that hit Osaka last year. It was 400 km in diameter.

To fans visiting Japan for #RWC2019 please adhere to all the warnings. https://t.co/KwoI5tmbcA

I do hope Japan versus Scotland goes ahead. It’s a fascinating game; the discipline and fitness of the Brave Blossoms versus the impish cheek of the Scots. Scotland obviously will run the ball from every quarter, but Japan are one of the fittest sides out there; if you look at the player stats, Japanese players abound in the top five for tackles, carries, offloads and clean breaks. In each instance they (at the time of writing) had two or three players in the top five for each stat – a testimony to their work rate and fitness.

Above all, honour is key in Japanese culture – for this reason alone they’ll want no unnatural (or in this instance, natural!) assistance to progress.

New Zealand will be equally frustrated that they don’t have the runout against Italy that they needed to get match time into their legs; just like England they’ve coasted through their group games in little more than training runs. Couple this with the likelihood they’ll meet Japan in the quarter-final, perhaps, just perhaps, this might upset their equilibrium and they’ll enter the latter stages undercooked. It’s a big call as nothing seems to affect their poise and perfection, but certainly, they’d have wanted to play.

South Africa, despite that opening loss versus the All Blacks, have suddenly ignited the afterburners. Cobus Reinach showed what all Saints fans knew he could do, and they’ll be happy they have match time in their legs and will relish playing their Pool A opponents (it could be any one of three!)

Clearly England will now top their group leaving France as runners-up. This isn’t ideal for either side; both haven’t yet gotten into their stride and both needed a really stern test before they face stronger opposition in the quarter finals. Ironically, the prize for topping the group is a ‘big three’ run in for England, not a great reward for topping their group, by whatever means. France will now play Wales (assuming we beat Uruguay on Sunday); in some respects this is a real banana skin for us and we’ll touch upon that later.

England are known to have a few key players in rehab; key to every component in their game is my fellow Saracen number eight, Billy Vunipola. As noted, whilst Eddie Jones will be frustrated that much needed game time has been removed, the extra rest and recouperation for his limping list will be welcomed.

So England and the All Blacks will be without a Test in two weeks going into their quarter-finals.

These are the situations that Eddie Jones and Steve Hansen would have prepared for.

France might just be dark horses. We’ve already seen the best and worst of them in two halves versus Argentina and again, one week away from the knockouts, the management team is in disarray. To any other nation these would prove to be impossible obstacles; to the French they’re as natural as red wine at lunchtime and they appear to be thriving in adversity.

Wales and Australia have now qualified. Wales will be desperate to keep on the top side of the draw for a marginally easier run in and with the massive prospect of playing the All Blacks in the final, if all goes to plan.

The game against Fiji was just what the doctor ordered. Massive, intense fast rugby played with passion and respect. I have to shout out the Flying Fijians for an exceptional display, one that was compelling. Semi Radradra was magnificent for the Islanders, absolutely world class, with massive shifts delivered by the entire Fijian back-row and three quarters.

Warren Gatland will be concerned about the injuries to the exceptional Dan Biggar and Jonathan Davies, but the test we were given will stand us in good stead for whoever we face in a week’s time.

Warren Gatland adds no long term fears on Jonathan Davies and Josh Adams injuries at this stage, but both will be assessed in coming days. #WALvFIJ #RWC2019

Put simply, we’ve already played a Test at ‘final stage’ intensity against the Wallabies, and the performances of our back three, back-row and half-backs have been magnificent, with Aaron Wainwright, Liam Williams and Gareth Davies consistently brilliant throughout the tournament. For once, we go into the last stage really fancied to go further and I believe the sheer habit of winning over the last 18 months will prove decisive as we get to knockout time.

Australia are likely to play their old foes England in the quarter-final and I believe the Wallabies might just have the firepower to undo them, provided they can contain England’s power. They can score from anywhere in the back division and the addition of Matt Toomua at 10 in the second half against us has unlocked the running of their talented three quarters. Samu Kerevi has been one of the standouts of the tournament and I see this game as pivotal in terms of the final outcome.

Whichever way you cut the typhoon issues, the actual pool outcomes appear not to have been that disrupted. However, in summary, the key here is pitch form and the balance of being tested, having all players fit and firing. In that respect, Wales, Australia, Japan and South Africa hold the cards, with England and New Zealand perhaps cursing their fortune.

It’ll be fascinating to see how this unfolds.

Michael Owen was a rangy, ball handling number eight for the British Lions and Wales. Noted for his keen rugby intellect, he played 41 times for Wales, leading them to a Grand Slam in 2005 and captained the British and Irish Lions versus Argentina in 2005 before a serious knee injury curtailed his impressive career at the age of 29.