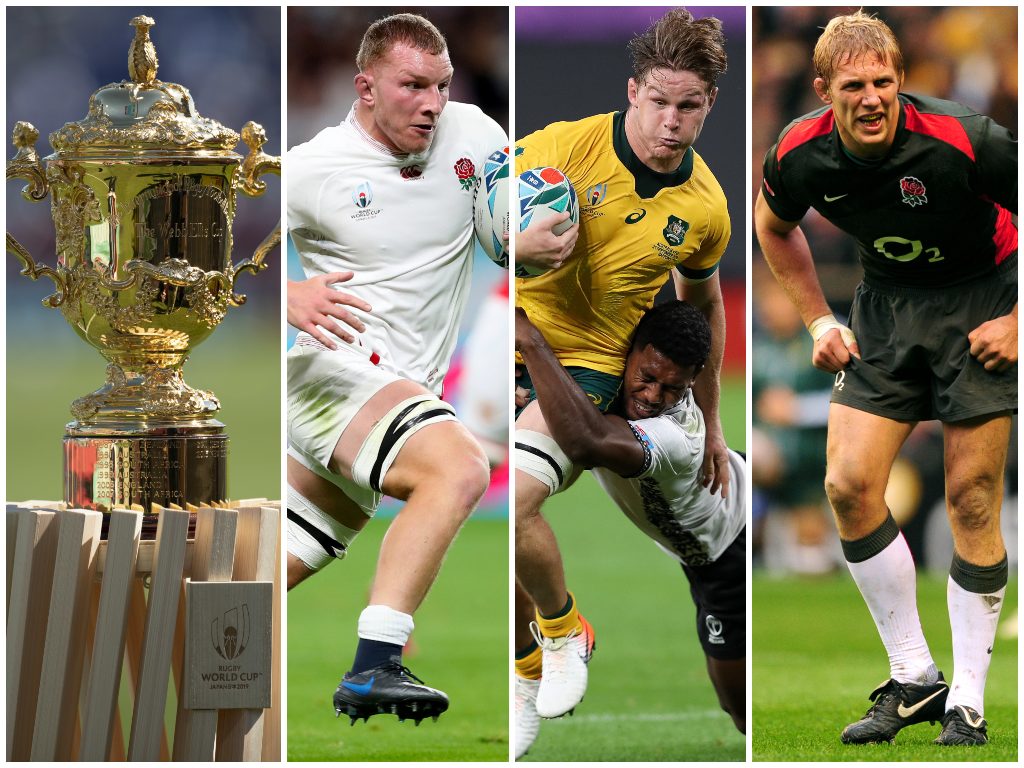 As we reach the knockout stages of the Rugby World Cup, we welcome back one of our regular Expert Witnesses to Planet Rugby, former England skipper and World Cup winner, Lewis Moody, to give us an overview of the quarter-final ties.

If ever there was a God of Fixture Lists, this is the one he’d have created! The amazing, compelling Brave Blossoms versus the brutal and powerful Springboks, a repeat of the incredible match in Brighton 2015.

I shudder to think how many column inches have been written on the skill and commitment of Japan. They’ve gone from the foundation Eddie Jones created to another level of finding a formula that works against even the very best opponents.

South Africa in 2015 was a turning point for them; it removed any mental barrier that might have said ‘why can’t we win this?’ to produce a level of confidence that says ‘we CAN win this’, a quantum shift in mindset. Looking back eight to ten years ago, when Tier One players started to get involved with the Japanese system, we heard tales of brutal pre-season sessions, extreme fitness and commitment, but without the skill or knowledge set to perform right at the top of the game. Since then they’ve found a way to win through accuracy, fitness, continuity and the ability to take the ball in low positions and make yards into contact.

Their ability to play with belief, freedom and fearless carrying has characterised their campaign, using speed and evasion to make those extra yards through the tackle in attack.

Most of all, their pace of recycle is exemplary. If you timed each side from their moment of contact to the moment the ball hits the next carriers’ hands, I reckon they’re hitting the 1.5 second mark, which is incredible, all created from their speed in support and lightening quick passing of the brilliant Yutaka Nagare at scrum-half, whose service is better than Roger Federer! This allows wave after wave of pacey and relentless attack, as evidenced by their first half versus the Scots.

However, Rassie Erasmus’ Springboks won’t make the same errors of their predecessors; for a start off, they know exactly what to expect and won’t get ambushed as before. Secondly, Erasmsus has clearly gone for a behemoth side that is picked purely to smash Japan with advantages in weight, strength and power, sapping the Japanese energy.

🗣️ "We will make sure we're really well prepared and won't have what happened in 2015 in the back of our heads." #JPNvRSA #RWC2019

South Africa, like Japan, have also played four games so go into the match firing on all cylinders, with a bench that provides maximum pace and impact. With world-class operators like Eben Etzebeth and Duane Vermeulen in that pack, I have to say I believe this will be the end of this chapter of the Japanese fairy tale. It’ll be a crackerjack and one I can’t wait to watch.

Key battle: Cheslin Kolbe v Kenki Fukuoka: these pint-sized pacemen are players of brilliance, footwork and gas. In a game where space will be at a premium, their electric running will prove crucial for their respective sides.

Everywhere I look in 2019 we seem to be playing Australia in some crucial sporting fixture or another! Ashes, Cricket World Cups, Rugby World Cups – they keep on coming at us, and frankly, I’d not want it any other way.

Australia go into the quarter-finals in decent form; a settled and powerful back division underpinned by the ball winning of two of the best flankers in the game.

I’ve played many times against David Pocock and Michael Hooper and I know first-hand how good their skills are; Pocock is the clamp over the ball, the ruck king extraordinaire, whilst Hooper is, bluntly, a right royal pain in the backside – always making incursions that disrupt and are effective.

I well recall training with England around 2010 at the Western Force HQ in Perth. Whilst we had some downtime, I found a load of training notes from their squad on one of the shelves and in there were their ‘lifting scores’ – that is their gym weightlifting levels. I got to Pocock’s, my direct opponent, and I realised he was so far ahead of me that it was frightening – maybe 20% or so – so much so that after reading the scores quickly, I decided not to delve further! Joking aside, it actually made me realise I couldn’t beat him one on one in contact, so I made the change in my mind to try and be quicker than he and use my pace so I hit contact before him. Both he and Hooper are exceptional players, but most of all, great blokes off the pitch and I am honoured to have played against two of the best.

England will go into this game wishing they’d have had one final Test match at intensity versus France, but that wasn’t to be. On the upside, that’s given our walking wounded time to recover and recuperate, with the Vunipola brothers the key beneficiaries of that.

Eddie Jones names his side for the quarter-final with Australia. 👉 https://t.co/V6lz8cRuMX #RWC2019 pic.twitter.com/h5YsTWK82O

I have to say Eddie Jones has surprised many in relegating George Ford to the bench for the talents of Henry Slade at outside centre, but he always has the option of changing that and he’s not shy of a quick decision if things aren’t initially working.

Aussies are some of the best people in sport and when people talk about countries having ‘special relationships’, nothing matches the true love/hate relationship we have with our Antipodean cousins. They hate us and we hate them, but in truth, they’re also our best sporting mates in the world and underneath it all, there’s a lot of love – which adds extra spice to the game.

This game has the potential to be an ‘Ashes Classic’! I do believe England will just edge it with power and belief, but it’s a real close one to call.

Key battle: Sam Underhill versus Michael Hooper: I’m a back-rower and this one is for the purist. The sheer doggedness of the old Aussie master versus the abrasion of the young English tyro – I cannot wait to see who comes out on top because I believe it will define the result.

In any sane world, this one should be summed up simply; Wales will win! However, France as usual, under the microscope, have outwardly fallen apart in terms of management, whilst inwardly steeling themselves to levels of eccentricity that they always bring with them at a World Cup.

Wales are outstanding and have transformed themselves from a gritty winning side to a team on a roll with brilliant open rugby. Their core is the connectivity between their outstanding back-row and their superb half-backs. All three back-rowers – Josh Navidi, Justin Tipuric and Aaron Wainwright – have been superb and Gareth Davies and Dan Biggar combine to threaten with pace of foot and precision of boot.

France have a great 40 minutes in them but I’m not sure they’ve got 80. To win, they need to play a first 20 minutes that rocks both Wales and the scoreboard. Sure, they’ve got the firepower to do that, and the leadership of the emerging Antoine Dupont at scrum-half, but I doubt they’ve got the fitness and wherewithal to challenge Wales for the full duration of the match.

Key battle: Gareth Davies versus Antoine Dupont: the pace and awareness of the Welsh flyer meets the rounded footballing skills of the young Dupont. If France are to win, everything hinges on their number nine.

Brodie Retallick to start for New Zealand against Ireland. #NZLvIRE

Another repeat of a great recent match. However, Ireland are a side that perhaps have gone off the boil together. They no longer look like a side impossible to beat, more like a side that say they are confident but underneath, have had that belief severely dented by losses to teams like Japan.

Bundee Aki is a massive loss in their midfield and he’s the glue that holds their attack together, forever the man that takes the ball into primary contact. Their set-piece is a shadow of previous years and I simply don’t see how they’re going to score the 20 points or so needed to win a Test match.

New Zealand have been low-profile; quietly going about their business, no fuss, no dramas. Of course, they’d have wanted a trot out against the Italians to clear the cobwebs out, but they’re a side that’s honed, tuned and, in rugby terms, immaculate.

I really cannot see anything but this game going with form and New Zealand coasting to the semi-final, unless of course, Ireland manage to rediscover their 2018 form and Johnny Sexton has the game of his life!

Key battle: Johnny Sexton versus Richie Mo’unga: No doubt that Sexton is a great of fly-half play and that Mo’unga is learning his trade, but if Ireland are to beat the favourites, it relies upon poor game management from the All Black pivot and a blinder of a match by the Irishman.

We thank Lewis for his time and he will be back for the next two weeks to preview the semi-finals and the final itself.

Lewis Moody MBE, a tearaway flanker, played 71 times for England and appeared in one Test for the British and Irish Lions. Moody was a key member of the England’s World Cup winning side in 2003 and skippered England in the 2011 World Cup. He will forever be remembered for winning the lineout that led to ‘that drop goal’.

You can listen to Lewis’ podcast on audioboom, spotify and Apple podcasts.