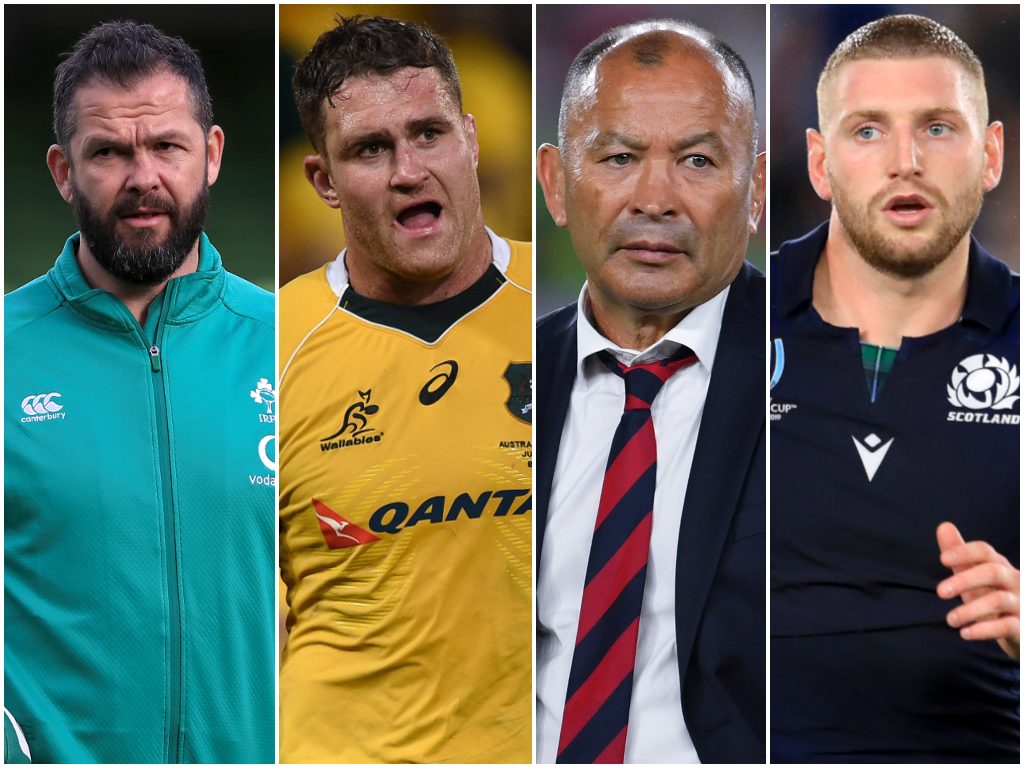 With two rounds of the Six Nations completed, Expert Witness is delighted to welcome former Australia skipper James Horwill to our team to examine the health of the tournament.

With 62 Tests behind him, 16 as captain, former Wallaby Horwill retired last year through injury aged 34. Currently studying at Cambridge University for his MBA, the Queenslander is no stranger to change and sees this season’s Six Nations as one of evolution for the teams involved.

“When you’re a kid living in Australia, you hear about the fervour for this competition and it’s not really until you’ve played up here that you really understand its depth of significance and achievement,” he noted.

“We’d kill to develop the level of interest in the sport that you guys get; it rivals the Football Premiership for pub and bar coverage with bums firmly on seats and it’s great to see that traditional support continuing.

“In terms of style, it’s pretty unique due to the shared club knowledge that goes between the teams, created by a fairly similar approach from the home unions but meaning that it remains competitive across the board. Down south, you always have competing styles, whether that be the physicality of South Africa or the total rugby of New Zealand, but up here it’s well executed basic rugby played with huge passion and that keeps the scorelines close across the board,” explained Horwill.

“In the modern game, rightly or wrongly, we’ve started to see teams basing their selecting on four-year cycles due to the ‘marquee’ nature of the World Cup. Inevitably, players who won’t be available in four years’ time get jettisoned unless they’re real greats (such as my old foe Alun Wyn Jones) and teams rebuild, with change of management or playing personnel a key theme.

“This year, the sides are in different evolutionary processes; France and Italy are absolutely rebuilding, Scotland are consolidating, with Wales and Ireland having spines of sides but under new management.

“England however, are in a different place, with Eddie Jones building upon success through fine tuning and looking to use the foundation of their World Cup campaign for greater success.

“When Jones took over the reins, he inherited a great group of players that perhaps were low on confidence. This is where he thrives – he’s outstanding at setting a vision and imbuing his team with belief, through honesty, commitment and hard work.

“England played some of the best rugby in 2019 and Jones should be commended for that. I think he sees this as a season as one where he can experiment, hence things like the Tom Curry trial at eight. As a team, they’ve stuttered a bit in this campaign, but perhaps the media have been a little cruel in expectation so far.

“France away can always go like it did in the first half in Paris, where you can be swept on a wave of emotion. England won the second half and responded well to a poor start. Murrayfield – well wins in those conditions are always something that shows the mettle of a side and it was ironic that the very thing Jones was being pilloried for (playing three sevens in the back-row) was the advantage that won them the game in Scotland, where the trio of opensides relished the wet, greasy conditions to scavenge all day.

“I personally think the experiment is coming along well, but I also believe that he’ll give others, such as my former team-mate Alex Dombrandt, a trot towards the end of the tournament.

“The criticism is ill-informed at times. Rugby is no longer as positionally relevant up front as it once was and I know Eddie looks to select a pack of eight with skills blended for the job rather than three individual units. When you have props like Ellis Genge, Kyle Sinckler and Mako Vunipola, they can offer the same carrying power and tackle count of the best back-rows, which allows you to do something different elsewhere in terms of creating a competitive advantage.

“The noise about his press comments is also quite amusing!” laughed Horwill.

“Knowing Eddie as I do, I can assure you nothing is off the cuff and everything is pre-planned. His little soundbites are well crafted and well considered and he’s a master at sending the press on a wild goose chase of throwaway lines in order to take media pressure off his players and put it upon himself.

“He’s the sort of guy who is a real player’s coach and his wryness in toying with the press is nothing but fun to him, all designed to alleviate pressure on his players.”

“Scotland’s loss to England has been somewhat dwarfed by the fall-out between Finn Russell and the rest of the team. This one is not going away and could be quite cancerous for Gregor Townsend if he can’t ameliorate the situation between the warring factions.

“Finn is a rugby genius and a match-winner. He is, by style and nature, what modern businesses call a ‘disruptor’; by that I mean he’s spiky, challenging and wants to change things through innovation. I’m sure he was the little kid at school who’d slap the big guys and run off laughing at them because he was too fast to be caught.

“The problem Gregor has is that he’s trying too hard to set rules for players who will push back against them. Treating people as one personality doesn’t work. The more team rules you create, the more will get broken and that’s what’s happened here – an impasse between Russell’s personality and the team culture.

“The Scots have limited assets and they need to maximise everything they have. They’re one or two performance away from emergence as a force – Townsend needs to sort this one and get all onside, otherwise this self-inflicted wound will never close.”

“The man is an institution in Wales and Wayne Pivac has a big task ahead. Both Wales and Ireland have enjoyed great coaching and player stability for a long period and the challenges both Andy Farrell and Pivac have are similar; taking very stable sides and improving upon them with limited player pools.

“Pivac’s Scarlets played an expansive offload-based game and it’s that same style he’s trying to bring to Wales. But the young players coming through are adaptable and enjoy a challenge – yes Wales were squeezed by Ireland but put players of the quality of Josh Navidi, Liam Williams and Jonathan Davies back into that team and they’ll be seriously formidable.

“He’s unearthed a gem of a tighthead in Dillon Lewis, a man who has a great low technique and can anchor the Welsh scrum like Adam Jones before him and Saracens centre Nick Tompkins has contributed well in the two games he’s played.

“But Wales under Gatland always found a way and Pivac needs to find continuity in that belief but bolt on to that his attacking ambition. It’ll be interesting to see how they finish up, especially when they face England on the road,” concluded Horwill.

“Farrell’s Ireland have look rejuvenated. Joe Schmidt did a fantastic job for years, but Ireland’s 2019 form dropped off. Sometimes a new voice is needed in the shed and I think Farrell has already shown that to be the case.

“Their gameplan is characterised by the efforts of their back-row and in particular, Josh van der Flier, a really under-rated classic openside that lives up to his surname,” quipped Horwill.

“Farrell’s developed the flying back three of Andrew Conway, Jacob Stockdale and Jordan Larmour very neatly and is giving Bundee Aki a free licence to play a much looser game than before. New leaders, like James Ryan and Tadhg Furlong, are emerging to replace the likes of Rory Best and I feel Ireland are very much back on the right tracks and playing some thrilling rugby.”

“Both of the European nations have been shadows of their former selves in the last few years, but I feel, certainly in the case of France, that they’ve hit upon a rich new crop of exceptional talent based upon their two U20 World Cup wins.

“Fabien Galthie, with the assistance of Shaun Edwards, has put real structure into the French game. I noted that for the first time I can recall that they’re playing with their flanks as open and blind rather than left or right, and to add to this, they’re playing tactics based upon game management from the fly-half as well as the scrum-half. Too often France see the 10 as a third centre and I believe Galthie has modernised the way they approach match control by empowering his fly-half alongside the world class skills of their nine, Antoine Dupont.

“They have also discovered a crackerjack of a leader in Charles Ollivon, a calm man under pressure who has delivered two world class performances in the last two rounds.

“Franco Smith’s Italy stuttered against Wales, but found their feet to push the French hard in Paris. Conor O’Shea used to mention that Italy were too Parisse-centric, meaning that they relied too much upon their talisman, thus preventing others from making key decisions and game changing plays.

“What’s been fantastic for them is their three young back-rowers have emerged via merit alone, using the new-found interest within Italy to springboard new talent. Former Quin Charlie Walker is currently working at Zebre and says that there’s real improvement at provincial level that’ll aid the advancement of the national team in a much more organic way than before.

“As we move into the next round, I really see Ireland challenging England to win the tournament in a close match at Twickenham. France are always a different team on the road and their clash in Cardiff will provide a much better measurement than the games thus far. Scotland’s trip to Rome is fraught with danger; inevitably now this is the wooden spoon battle and I can see a rejuvenated Azzurri giving them a lot of problems.

“These three games are incredibly tough to call which underlines the point I made at the start; the Six Nations is always one of the most competitive and close tournaments around and long may that continue,” concluded Horwill.

James Horwill played 62 Tests for Australia, captaining 16 times and scoring six tries. A former Harlequin and Queensland Red, he retired in 2019 to continue his studies at Cambridge University.