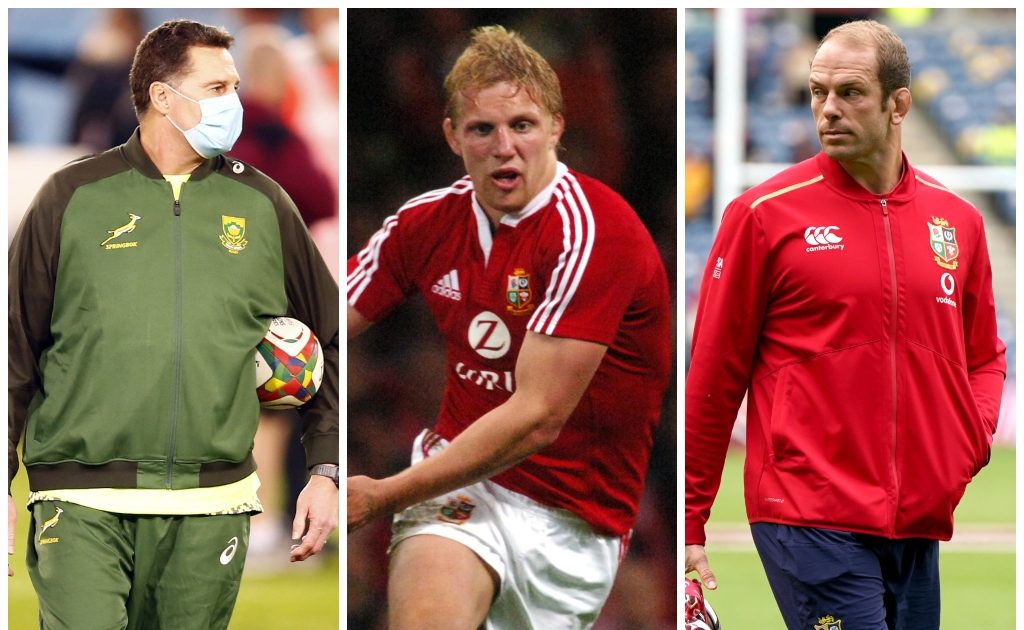 With South Africa ‘A’ naming a near Test side and with Alun Wyn Jones rumoured to be returning to British and Irish Lions duty, Expert Witness is delighted to welcome the return of former England skipper and Lion #723, Lewis Moody, to review the news.

With South Africa selecting a 23 for the so-called ‘A’ game on Wednesday night that features over 700 caps, 19 members of the Rugby World Cup winning squad, it’s safe to say that the 2021 British & Irish Lions series is now a four-Test affair.

Moody acknowledges the enormity of the situation, but understands the decision, given the lack of preparation time that the Springboks have had.

“This absolutely shows us there’s a real worry in the Springbok camp, they know they’re undercooked and in need of preparation time, but I would like to think that the brilliance of the Lions play so far has actually caused the South African management so much concern that it’s the form book that’s forced their hand.

“Teams don’t react in this manner unless they’re seriously worried, and this, coupled with a request to repeat the fixture in place of the Stormers fixture on Saturday is quite remarkable. I’m really surprised they came out and requested the fixture change on top of selecting a Test side in the guise of an ‘A’ team, as I know how much the fixture will mean to the Stormers and their players (even if behind closed doors) because playing the Lions is so unique to your career,” explained the former Lions flank.

He added: “I am absolutely certain that the South African aim will be two-fold; firstly, to exhaust a relatively small 37-man squad by being as physical and unwelcoming as possible, with the secondary option of refocusing the Lions selection plans and getting them to ask questions of themselves, either through form or injury. If you’re cynical, it appears they’ve taken huge advantage of the various disruptions over there and perhaps manipulated the situation to their own benefit.”

“But make absolutely no bones about it; as a Lion you get thrown curve balls – you learn to adapt, to overcome and to beat the odds. If anything, this should doubly motivate the Lions squad to succeed, and the trick here is to treat this as an opportunity to succeed and to absolutely turn the tactics of the Springboks around and make them doubt themselves by creating a performance that rocks them to their core,” Moody advised.

“To compound this, I’m further staggered by the news that Alun Wyn Jones has made a Lazarus-like recovery and may very well return to the tour. Considering the success enjoyed by this group of players already, this is a high risk strategy from Warren Gatland, although I totally understand the value and presence Alun will add.

“Since his injury, the 2021 Lions will have formed a culture without him. Certain dynamics will have happened, with leaders emerging on their own volition, and a clear pecking order of both rugby and down time will have taken place. Parachuting even the great AWJ into this environment will change that dynamic and it’s absolutely key that Gatland manages his presence back into the team. At the time of writing, I am unsure what role he’d play – it could be player, it might be skipper, it may even be a pastoral role, and all of that needs clear definition.

“With the ante upped in terms of physicality and standard, you can’t have too many quality players around. It’s also a fact that there’s only really two specialist tighthead side locks on tour (Adam Beard and Jonny Hill) and it’s the one area where the Lions need some cover, especially considering the demands that the next three or four weeks will bring,” explained Moody.

“Going back to the cultural thing, I well recall England recalling Lawrence Dallaglio to the 2007 Rugby World Cup. By that stage, new voices had emerged as leaders – Phil Vickery, Martin Corry and Jonny Wilkinson. Lawrence wasn’t the player in 2007 that he was back in 2003 and coming into that group late on really confused a few things – and also, from Lawrence’s perspective, him coming into that as a natural and former leader, confused him – he was hanging on playing wise and the whole thing was quite diversionary,” he reminisced.

“I want to make it clear – I have utmost respect for him; I just wonder if this is the wrong plan for the right man at the wrong time.”

“Now that we’ve got all of that off our chest, I have to confess how much I’ve enjoyed watching this brilliant Lions side. I love the continuity of play, the fearless running with ball in hand and the ferocious competition for places we’ve seen.

“The fifth week of a Lions tour tends always to be the moment that a Test side emerges in shape and I think we’re one game away from seeing the real Test team. The side named for Wednesday is probably two thirds of the matchday side for the full internationals, with probably Stuart Hogg, a front-row and a few changes in midfield left before we see confirmation.

“The back three players have been exceptional on tour so far, and frankly there’s no weak link. You can perm any three from six and have a magnificent counter attacking and running trio. In midfield, I believe it’s now a case of fixing if Owen Farrell starts at 10 (where he was brilliant a week ago v the Sharks #1) or plays at 12 with Dan Biggar at fly half.

“One noticeable thing about the 2021 team is there’s been relatively few turnovers – that’s as much down to the unstructured form of the games, but come the Tests, things will change. That might open the door for Bundee Aki to start at 12, as he leads the turnover count with nine, five more than the nearest best, and his defensive work may well be key.

“I always see this through my personal lens of an openside flanker; Biggar, Farrell, Henshaw is a proposition where I can see areas I can physically attack. Farrell, Aki, Henshaw (or Harris) would make me think a bit harder about where I attacked them and I kind of feel the latter combination would make life a little tougher.

“In the pack, Hamish Watson – well what can I say that’s not been said before? He reminds me of a ball in a pinball machine – banging and crashing into everything but lighting up everything he touches. I was pretty sure that Tom Curry would be the seven in the Tests, but now Hamish must start. I’m unsure of the rest of the balance of the back-row; the test they have ahead of them is much different to the ones seen in the provincial games thus far and despite the form of the hybrid lads, Courtney Lawes and Tadhg Beirne, I’d be looking at switching Tom to blindside and going with the two most abrasive flankers I have available and then pick an eight with the best skill set to support the flanks picked.

“Up front, the Test hooker berth is a straight shootout between Jamie George and Luke Cowan-Dickie now. George has been incredible in terms of skill set and his lineout work has opened up so much for his backs to work off. Luke is a different player – a real animal of aggression and as I say, it fully boils down to which style you want.

“There’ll be big eyes on Kyle Sinckler and Wyn Jones on Wednesday night to see if they’re ready to support the likely Test props, Rory Sutherland and Tadhg Furlong. Both are absolutely untested against the power they’ll face from the Springboks (Sinckler played 43 seconds of a Rugby World Cup Final against them) and both have perceived question marks over their scrummaging. It’s essential that they hang on, as both lads are magnificent handling props around the park, but in South Africa, as we all know, you won’t do much running if your lungs are hanging out of your backside,” quipped Moody.

“Very finally, Conor Murray, who isn’t in the best form, sees a big test of his leadership. If things go wrong in Cape Town, that may well inform the thinking on Alun Wyn Jones but also put him under pressure, but if it goes to plan, it might just take a lot of the spotlight off his return and make all a lot easier for the squad and management.

“Don’t ask me to call the result on Wednesday. Logically, the Lions should win by two scores on the form and build-up we’ve seen; but this is now a Test match in all but name and 2021 is the tour and the year that logic flew out of the window. Lord alone knows what will happen and I personally cannot wait to see!”

We thank Lewis for his time.