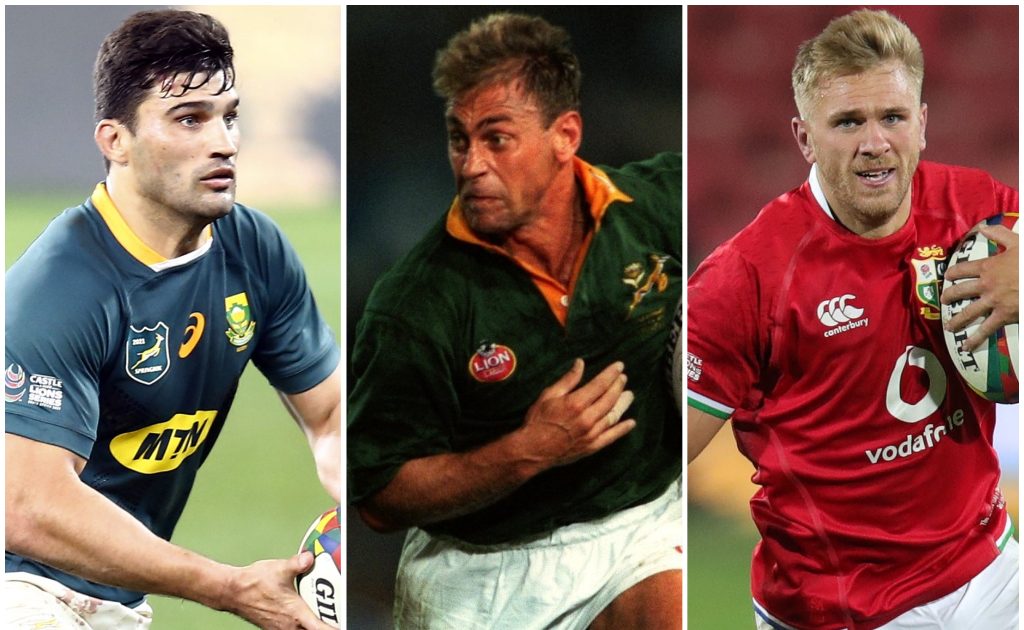 As tensions mount between South Africa and the British and Irish Lions, Planet Rugby welcomes back an all-time great of Springbok rugby, world champion full-back Andre Joubert, to discuss all of the major talking points ahead of Saturday’s second Test.

After a narrow loss last weekend, Springbok director of rugby Rassie Erasmus took the unprecedented move of launching a scattergun tirade of analytical puffery aimed at World Rugby and their officials. In an hour-long Vimeo video, Erasmus treated the rugby watching public to a blow-by-blow dissection of referee Nic Berry’s appointment in a move seen by some as career suicide by social media and by others as a fair and reasonable assessment of match-turned officiating.

Joubert believes, however, that all is right within the Springbok camp and that Erasmus yet again is playing the brilliant psychological mind games that defines the world champion coach.

“Look, Rassie has always been a man to push the boundaries. He is a great motivational man and he’s certainly using his platform to get people behind him,” Joubert explained.

“It’s certainly not the first time he’s done something controversial in the game; when he was director of rugby for the Cheetahs, he used to use the stadium roof lighting in different colours to convey messages on to the team operated by his own remote control and got widely criticised for that, but I do like to admire his cheek and innovation!

“Rugby is a very instinctive game and Rassie played and now coaches close to that emotional edge. He’s got a brilliant rugby mind and he craves that close contact with those on the pitch, where he can get feedback both ways. Is he micromanaging? I don’t believe he is – I think he’s doing everything he can to support his players and gain a competitive edge.

“Some have commented that this is eroding his relationship with Jacques Nienaber, the head coach and question if Jacques is being undermined, but you have to understand that the pair of them have done this before and are a double act of Nienaber’s technical insight and Rassie’s emotional inspiration.

“You always need a balance of good people, whether in business or in sport; Kitch Christie, our 1995 Rugby World Cup coach, plugged knowledge gaps with some great assistant coaches such as Gysie Pienaar and Rudy Joubert, guys that would challenge Kitch and augment his strategy with their tactics. I see the relationship between Rassie and Jacques as pretty similar and they are a balanced and complete coaching team,” said Joubert.

“Looking back on the first Test, I think there were a number of surprises that we witnessed, but the key one for me was the lack of a Plan B from South Africa,” he commented.

“I think that a lot of observers were surprised with the ease with which the Lions matched the Boks upfront. Now, for those watching the provincial games, we saw the Lions build their physicality in every game they played and they were very well placed for the Tests and it should be no big surprise to find out that these guys were as big and tough up front as they demonstrated last Saturday.

🦁 The tourists can taste a series triumph in South Africa. #LionsRugby

✍️ Check out our bumper preview and prediction for #BoksvLions clash. https://t.co/xriC8Iap91

“When you see that you’re not getting that forward dominance, you can’t simply keep kicking the ball away aimlessly and boshing up the 12 channel and then not react to the game situation in front of you.

“Martin Corry mentioned on Expert Witness earlier this week about feeling momentum as a player and then reacting to it and I don’t feel we did that. In fact, the British and Irish Lions showed far more adaptability as witnessed in the second half, when they reacted to their first half display by simply keeping the ball and waiting for defensive or technical errors. They played with great accuracy and pace in that second half and they changed from their first half plan to a tight strategy in the second half.

“We have to realise that this was our first major Test match since the World Cup. To think we’re in the same physical and mental place we were back in November 2019 is a folly and there’s a big step up in sharpness in both aspects when you play at Test level. As much of this is the speed of decision by the players – there’s far less time to think clearly and pressure plays tricks on your thinking.

“We also know there’s a marginal but noticeable gap in fitness – the Boks dropped off at the 50 minute mark last week. Now, you cannot increase match fitness in a week leading up to the Tests, but what you can do is manage your 23-man resources better, to give the maximum output of the players over those 80 minutes and I don’t think we did that well enough last weekend,” noted Joubert.

“I have been in exactly the position the Springboks find themselves in, back in 1997 when we played the second Test in Durban. We threw the kitchen sink at the Lions in that game and it was only poor goal-kicking that allowed the Lions to close the series off that year.

“I expect the first 20 minutes of the Test to be something like two worlds colliding. South Africa will go direct and physical during those opening exchanges but they will need to bolt more on in attack to dominate the game.”

Joubert added: “Duane Vermeulen has been a monumental loss for us but reverting to a traditional style number eight in Jasper Wiese has given us more carry on the gainline. Wiese has been in compelling form for Leicester Tigers and his direct running off the base or down the 12 channel was a vital cog in the performance of Leicester in the latter half of the Premiership season.

“Going back to that lack of Plan B, Wiese is essential to commit players in midfield to allow South Africa to use the width offered by their brilliant wingers. I think, in the first Test, we saw three ‘three pass’ moves from South Africa in the centres. Each one of those moves went right to left, as rugby tends to be a game played from that direction purely because most players find it easier to pass off their right hand.

“Damian de Allende is critical in this regard – he must look to have the ball available in both hands to pass either side. Right now, if he’s working a move right to left, he’ll hold the ball ready to pass; however, should the move go the other way, he’ll habitually tuck the ball under his arm and take the crash and I think the Lions have worked this out. With Cheslin Kolbe being the winger outside him on the right, this isn’t helping variety in our attack and I think the Boks really need to think about sustaining their options outside the carrier when attacking through phase plays,” he explained.

“To continue this theme, when the right side attacks hit contact, we’re seeing players attacking the right shoulder of their defenders when they come back inside; for most people, that’s the easier side to tackle with, and it’s key that our centres use hands to keep the ball going along the line but then step outside to attack that weaker shoulder and pass from left to right.”

“I do think, however, that Warren Gatland has selected cleverly for this Test. He’s made three small changes which will have significant impact. I am a big fan of Elliot Daly, but in the physical game we saw last week, Chris Harris will offer more go forward off static starts than Daly can, plus he will be at his best as a finisher when the game breaks up a bit. Same too, for Conor Murray and Ali Price – Conor offers a little more control and has great accuracy in his box-kick, something the Lions believe is a strength they can leverage and Mako Vunipola coming in gives the Lions an extra flanker as long as his scrummaging holds up.

“They’ll look to up the tempo but rely upon accuracy in retention and phase play to create scoreboard pressure and it’ll be a big ask for any side to keep them at bay for 80 minutes.

“In the final analysis, this is a must-win game for the Springboks. In a rugby mad country, the prospect of our world champions failing at the first hurdle of their World Cup defence is absolutely unthinkable and the weight of public expectation is absolutely huge,” concluded Joubert.

“I expect the game to be another level of pace and physicality than we saw last week – two sides that have gone through their first exchanges and now will be going for full-on rugby warfare. I’ll back South Africa to win, simply because they have to. Failure would be a disaster in the eyes of the rugby watching public and I believe emotion and pride may just be the qualities that pull them home.”

We thank Andre for his time.

André Joubert is one of the greatest full-backs in the history of rugby. A World Cup winner in 1995, he played 34 Tests for South Africa, netting 115 points with nine tries. Known as the ‘Rolls-Royce’ of full-backs, his elegant running and speed of footwork lit up the sport for four seasons and he crossed for his last international try in the second Test v the British and Irish Lions in 1997. He now runs a commercial supply company in Durban, whilst trying desperately to reduce his golf handicap.