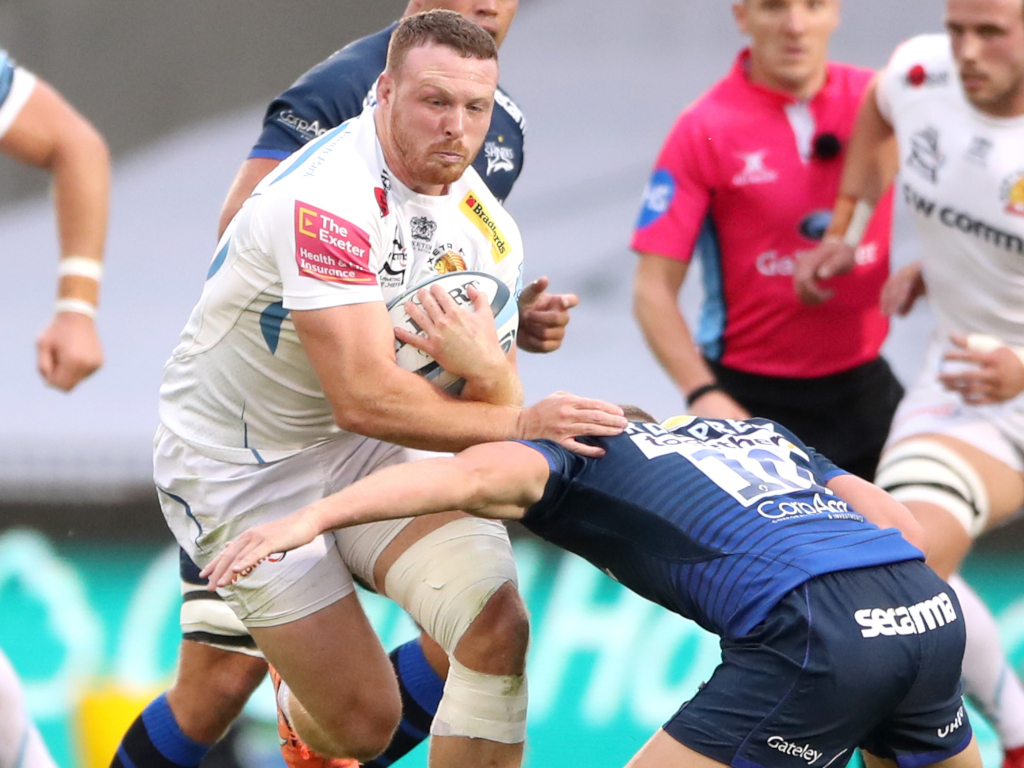 Exeter Chiefs maintained their buffer at the top of the Premiership table following a dominant 32-22 triumph over Sale Sharks at the AJ Bell Stadium.

The Chiefs trailed 14-10 at half-time but turned on the style after the break with three tries in a devastating 13-minute spell to secure a second consecutive bonus-point win since the resumption.

The four-try victory avenged a 22-19 defeat at Sandy Park in January and demonstrated the ground that Sale, champions 14 years ago, still have to make up if they are to be considered genuine contenders once more.

They are now 14 points behind the table-toppers and have plenty to do if they are to finish in the play-off places at the end of the season.

Sharks director of rugby Steve Diamond demanded a more disciplined effort from his team following a disappointing 16-10 defeat by Harlequins at the Stoop last Friday but their old failings were all too apparent.

They made a dream start with two early tries but were on the wrong end of a 23-12 penalty count as they fell away badly in the second half and needed a late try to add a touch of respectability to the final scoreline.

The game exploded into life from the start, with three tries in the first 10 minutes setting the mark for a fast-paced encounter.

England centre Henry Slade, the architect of most of the Chiefs’ attacking moves, set the ball rolling by getting winger Olly Woodburn into space with a perfect inside pass and number eight Sam Simmonds got on the end of the move to touch down.

Sale’s response was quick and decisive as a strong carry from England centre Manu Tuilagi took him to within a couple of feet of the line and set up the position for scrum-half Faf de Klerk to get England flanker Tom Curry crashing over for an equalising score.

Three minutes later fly-half Rob du Preez made the most of some strangely soft defence to glide through for a second try and his second conversion put the home side into a 14-7 lead.

The game settled down after the lively opening and Joe Simmonds cut the deficit to four points just before half-time with a penalty, one of 21 awarded in the first half alone by referee Tom Foley.

Stuart Hogg finishes another brilliant @ExeterChiefs back-line move in the blink of an eye!

Du Preez restored the Sharks’ seven-point advantage with a 40-metre penalty three minutes into the second half but the visitors took control with two tries in seven minutes that illustrated both the Chiefs’ power and poise.

Flanker Jacques Vermeulen picked up at the base of a ruck close to the line to score unmarked while Slade once more demonstrated slick handling to get Joe Simmonds into space and Woodburn linked to get full-back Stuart Hogg over for a classy try.

Joe Simmonds was off target for the first time with his third conversion attempt but made amends with a penalty from halfway which stretched his side’s lead to 25-17.

Sale had barely recovered from the double salvo when their defence cracked again, allowing England hooker Luke Cowan-Dickie to be driven over from a tap penalty, and Joe Simmonds kicked his fifth goal.

That made it 32-17 but at least Sale had the final say when Marland Yarde found the space to get replacement winger Denny Solomona over for a consolation try.

The Sharks also lost ground on Bristol Bears, who were too good for Gloucester as they secured a 33-24 victory at Kingsholm.

Pat Lam’s men were dominant in the first half with star signing Semi Radradra particularly influential. The Fijian was in fine form as Max Malins, Henry Purdy, Harry Thacker and Radradra himself all crossed the whitewash.

Although the Cherry and Whites responded via Fraser Balmain, Chris Harris and Stephen Varney, Bristol were always in control after the break thanks to Ben Earl’s score.

The Bears are four points clear of the third place side, which is now Wasps, after the Midlanders leapfrogged Sale by defeating Worcester Warriors 32-17.

Worcester impressed in the opening half, going 17-10 ahead through Nick David and Beck Cutting efforts, but the hosts controlled matters in the second period.

Tom Willis had reduced the arrears before the interval and he was joined on the scoresheet by Gabriel Oghre, Alfie Barbeary and Tom Cruse as Wasps lifted the intensity.