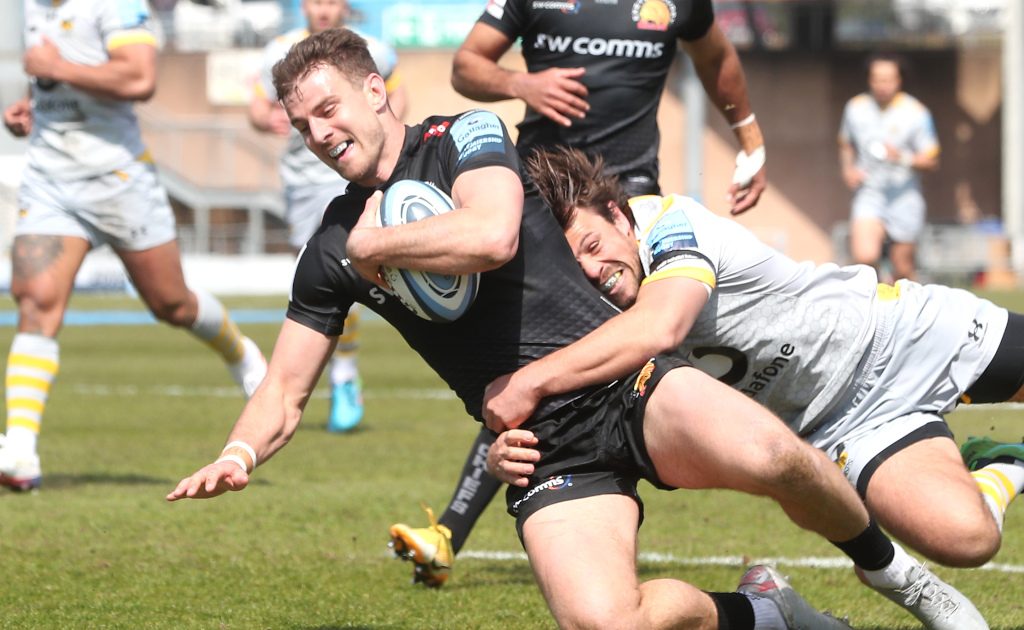 Exeter Chiefs fought back from being 13-10 down at half-time to defeat Wasps 43-13 in their Premiership clash at Sandy Park on Saturday.

There was also a 20-minute return off the replacements’ bench for Chiefs’ England wing Jack Nowell, who made his comeback following six months out due to toe ligament surgery and then a hamstring problem.

But for Wasps, despite some impressive spells in the Devon sunshine, it was their sixth defeat from the last seven Premiership games, and play-off chances appear remote for Lee Blackett’s team.

Exeter found themselves under pressure as the Wasps forwards targeted early in-roads, but after scrum-half Dan Robson’s pass fell the Chiefs’ way, Devoto gathered to claim an opportunist try from 80 metres out.

The England international broke clear in open play, knocked a Wasps defender out of his way and then set up quickly-recycled possession for an unmarked Hill to cross wide out.

But Wasps responded impressively, taking a three-point lead shortly before the break due to a second Umaga penalty and then a try following Exeter and Scotland star Hogg’s error.

Hogg had plenty of time to launch a clear kick into touch from inside his own 22, but Bassett charged it down and then gathered for a try, before Umaga added a wide-angled conversion.

And Wasps finished the opening 40 minutes as they had started it, camped inside Exeter’s 22 and giving the Chiefs plenty to ponder during half-time.

Exeter began the second period by moving up a gear in terms of their intensity, and it took a brilliant tackle by Wasps wing Paolo Odogwu to deny Chiefs number eight Sam Simmonds his 15th Premiership try of the season.

But the Chiefs did not have to wait before they regained the lead, with impressive approach work by Devoto creating space and Hogg atoned for his earlier mistake by finishing strongly.

And Exeter were back at it just two minutes later, claiming a bonus-point try after Cordero intercepted Wasps centre Malakai Fekitoa’s pass and leaving the visitors nine points adrift.

The job was then completed by Wales international Francis 10 minutes from time, who scored his first Exeter try, and Simmonds converted to leave Wasps floundering following a second half that Chiefs dominated.

There was still time for Simmonds to touch down and convert his own try, before Hogg crossed for his second, as Exeter delivered one of their most impressive 40-minute performances this season.

Du Preez was sent off in the 26th minute with the Sharks leading 12-5 through tries from Faf de Klerk and Arron Reed.

Jonny May had responded for the Cherry and Whites prior to that incident and George Barton then added a penalty to give them a huge chance of upsetting the play-off challengers in the second period.

That seemed to be a long shot when an AJ MacGinty penalty and Marland Yarde try moved the hosts 14 points ahead but quick-fire scores from Santiago Carreras and Willi Heinz levelled matters.

Gloucester had the momentum but it was Sale who wrestled it back to claim the win through MacGinty’s three-pointer.

Despite their hammering at the hands of La Rochelle in the Champions Cup quarter-finals, the Sharks have been in fine form and they began this encounter in excellent fashion.

Alex Sanderson’s men consistently pressured the opposition defensive line and, although one opportunity went awry, they were rewarded when Du Preez broke through and off-loaded for De Klerk to score.

The hosts were playing some fluent rugby but at times they overplayed and the Cherry and Whites capitalised as another stray pass allowed the Premiership strugglers to counter-attack.

After the ball was kicked forward, it became a foot race between Luke James and May and there was only one winner as the wing touched down to reduce the arrears to 7-5.

Sale responded almost immediately, however, and constructed another well-worked try as Sam James’ inside pass sent Reed across the whitewash.

The Sharks were in control but they were dealt a blow when fly-half Du Preez was correctly sent off for a dangerous tackle after tipping Val Rapava-Ruskin beyond the horizontal.

Barton then reduced the deficit from the tee before a breathless passage of play saw the ball regularly move from one end of the pitch to the other.

Louis Rees-Zammit was deceived by the bounce when in an excellent position to score before the home side counter-attacked through Sam James and MacGinty but the fly-half was unable to catch James’ pass when inside the opposition 22.

Both teams continued to attack and turn over the ball but, thankfully for both pack of forwards, play eventually came to a halt.

That was the last significant action of the half as Sale went into the break four points in front.

The Sharks soon extended their lead in the second period as they began the half well, with MacGinty kicking a penalty.

They were also handling the disparity in numbers impressively and were rewarded for their endeavour through Yarde’s try.

MacGinty was the architect of the score, weaving his way through the defence before the wing crashed over from close range.

It appeared to be a long way back for Gloucester but they finally found the formula to take advantage of the red card.

Firstly, a fine Billy Twelvetrees pass meant Carreras could touch down before they produced a lovely move for Heinz to go over.

The Cherry and Whites gave Rees-Zammit the space to sprint down the right before he combined with Lewis Ludlow to send the scrum-half across the line unopposed.

Twelvetrees’ conversion levelled matters but Sale retook the lead through the boot of MacGinty, who bisected the uprights with 10 minutes remaining.

Gloucester went in search of the winner, playing the off-loading game which had served them so well in the second half, and thought they had it through Mark Atkinson.

However, it was chalked off for an illegal clear-out from Ed Slater and that proved decisive as the Sharks secured an important win.