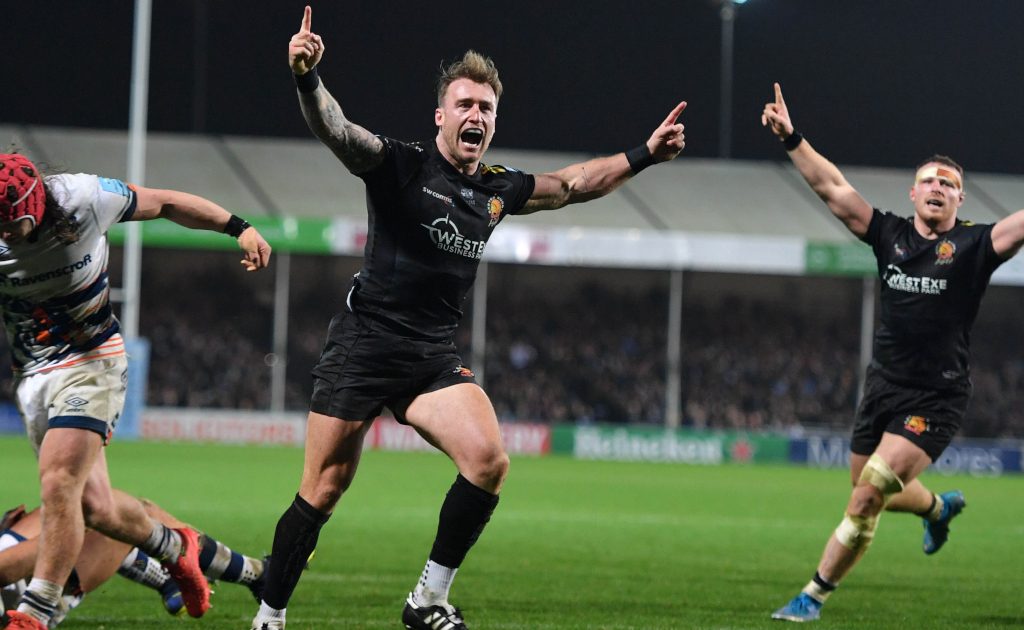 Exeter Chiefs controlled the game against Bristol Bears but were made to wait until the latter stages to secure a deserved 19-13 victory at Sandy Park.

The Devonians were the better side for much of this Premiership contest and went into the break 12-3 ahead thanks to Tom O’Flaherty and Jonny Hill tries.

Callum Sheedy kicked a three-pointer for the Bears in the opening period and they defended manfully to keep themselves in the match.

When Henry Purdy’s interception try brought them to within a penalty of claiming an unlikely win, they sensed an opportunity, but the Chiefs finally sealed the triumph when Stuart Hogg went over.

Sheedy’s late effort off the tee rescued a bonus-point for Bristol, but last season’s league leaders are languishing down in 12th place.

Exeter centre Ollie Devoto made his first appearance for almost two months after recovering from injury, while Sam Skinner moved into the second-row and Jannes Kirsten started at openside flanker.

Bristol captain Steven Luatua missed out because of a calf muscle injury, so lock Joe Joyce skippered the side, with Dan Thomas and Nathan Hughes gaining back-row starts.

The early exchanges saw both sides working hard for consistent territory and possession, before Exeter opened the scoring with a superbly-worked try after 13 minutes.

Simmonds converted from the touchline and Bristol were rattled, which Sheedy underlined just three minutes later by sending a 30-metre penalty chance wide.

Sheedy then made amends for his miss by finding the target from just inside Exeter’s half, cutting the deficit to four points, but Bristol then suffered an injury blow when full-back Charles Piutau went off and was replaced by Purdy.

Exeter’s forwards displayed a healthy appetite, and their impressive efforts from an attacking line-out left the Bristol defensive structure disorganised.

After patiently building through the phases, a second Chiefs try arrived, with Hill breaking two tackles to touch down and open up a nine-point advantage.

Bristol failed to mount a meaningful attack during the first half, and Exeter’s only minor concern heading into the break was that they were not further in front.

Bristol boss Pat Lam made three changes early in the second period, including replacing England prop Kyle Sinckler with John Afoa, and the visitors enjoyed a sustained spell of pressure.

Exeter were in retreat mode for the first time, yet their defence held firm and scrum-half Jack Maunder’s lengthy clearance thwarted Bristol.

A scoreless third quarter meant that Bristol were still in the contest, and they threatened through centre Semi Radradra when he broke clear from his own line, but he spilled possession approaching halfway.

However, Bristol struck with 11 minutes left, claiming an opportunist score when Purdy intercepted Simmonds’ pass and sprinted 50 metres to score.

Sheedy’s conversion set up a tense finale, and it was Exeter who came up trumps, establishing field position from which they pounced for a decisive try.

Centre Henry Slade went close, before possession was quickly recycled and Hogg went over for Chiefs’ third try, with Simmonds’ conversion ensuring that there was no way back for Bristol.