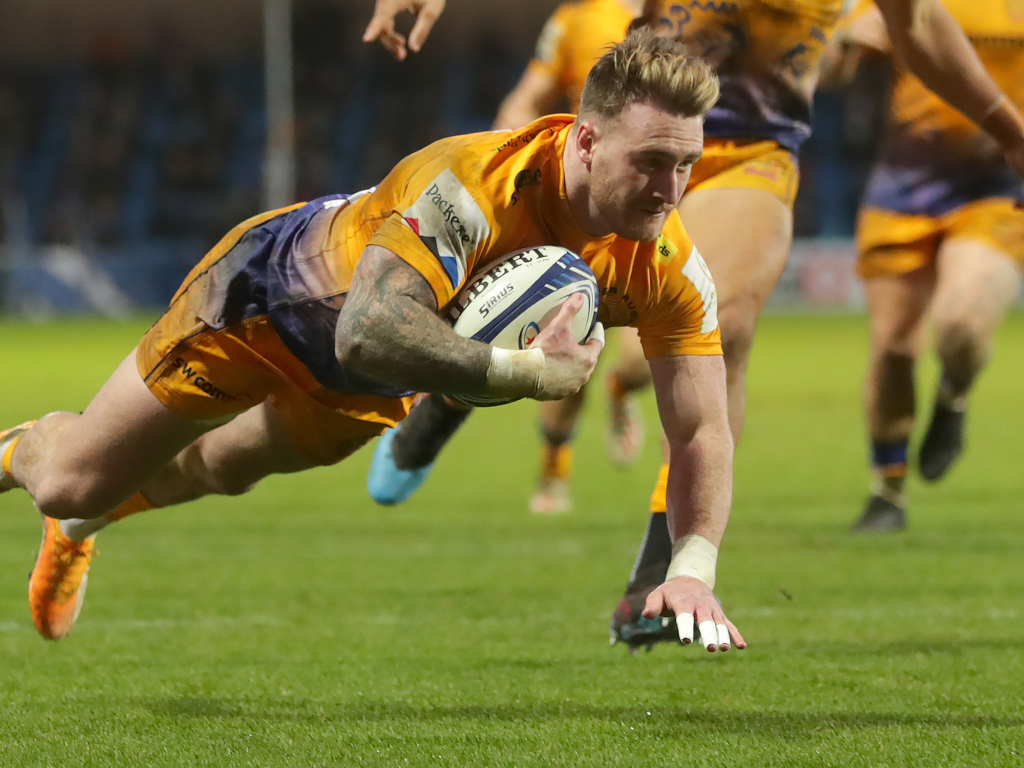 Exeter Chiefs launched their defence of the Champions Cup by crushing Glasgow Warriors 42-0 in a one-sided game on Sunday.

Roared on by a 2,000 crowd – the first spectators allowed into Sandy Park since March – Exeter delivered a comprehensive win that put them firmly among the early Pool B pace-setters.

Glasgow showed plenty of grit, but they offered little in attack as Exeter’s forwards dominated and Chiefs had a bonus point secured midway through the third quarter.

Life for the European champions will soon get infinitely tougher, with four-time tournament winners Toulouse waiting for them in France next Sunday.

Toulouse opened their campaign in impressive fashion away to Ulster, and the encounter against Exeter already looks a pivotal game regarding the race for quarter-final places.

But Exeter will travel in confident mood, having knocked out Toulouse at last season’s semi-final stage and winning all four of their domestic and European games this term with bonus points.

Both sides welcomed back a number of international players, with Exeter including ex-Glasgow players Hogg and Gray, as the Chiefs began a new Champions Cup campaign just 57 days after they lifted the trophy by beating Racing 92 in Bristol.

It was a hesitant opening by the Chiefs, though, with Simmonds putting the kick-off straight into touch, before Glasgow gained a long-range penalty from the resulting scrum that Peter Horne sent narrowly wide.

But Exeter were soon into their renowned rhythm, and they delivered a trademark try after 14 minutes.

They went close with a driven lineout, and when Chiefs repeated the tactic from their next attack, Sam Simmonds made no mistake, touching down for a score that his brother Joe converted.

The Exeter forwards began to find overdrive, and there was little Glasgow could do stem a relentless flow of phase-play deep inside their own 22.

And that's why they're champions 🏆

Perfect start to the defense of their title, three words to sum that up?#HeinekenChampionsCup pic.twitter.com/IGns7oJ56O

Gray crashed over for a second try in the 24th minute, again converted by Simmonds, and referee Mathieu Raynal lost patience with Glasgow’s repeated infringing, showing a yellow card to centre Sam Johnson.

Glasgow did not concede a point while Johnson was off, and while Exeter did not score again before half-time, the visitors saw two more departures when Horne and hooker George Turner departed for head injury assessments.

It was a solid, rather than spectacular, first 40 minutes by the Chiefs, but with no doubting their supremacy up-front.

Right on cue, the Exeter backs took centre stage just two minutes after the start when Woodburn made a searing midfield break and sent Hogg across for a superb try that Simmonds converted.

There was no way back for Glasgow, and Exeter collected a bonus point in the 54th minute when Glasgow’s lineout malfunctioned and Yeandle scored a simple try, converted by Simmonds.

Exeter had not finished yet, and Woodburn showed the Glasgow defence a clean pair of heels to add try number five, which the immaculate Simmonds converted.

And with one eye on the meeting Toulouse in seven days’ time, Exeter boss Rob Baxter made a host of changes, taking off the likes of Hogg and flanker Dave Ewers and being able to reflect on a convincing afternoon’s work.

Elsewhere, Connacht claimed a losing bonus-point as they were defeated 26-22 by Racing 92 in Paris.

The hosts started strongly with tighthead prop Colombe powering his way over the line after five minutes following a powerful driving lineout with Iribaren converting.

Connacht enjoyed a period of pressure with Carty kicking their first points after Racing were penalised for not rolling away.

But the visitors struggled to cope with Racing’s firepower behind the scrum and the French giants were soon celebrating their second try.

Racing spread the ball wide to outside centre Virimi Vakatawa who bumped off an attempted tackle from Healy.

The France international raced clear into the Connacht 22 before offloading to Australian great Beale to touch down with Iribaren again adding the extras.

Connacht struggled to cope with Racing’s maul which put the French club on the front foot.

With numerous Connacht defenders sucked into the maul the ball was spun wide to Finn Russell whose long pass released Vakatawa who shipped the ball onto Taofifenua. The young wing claimed their third try with a sensational acrobatic finish at the far left-hand corner.

Connacht laid siege to the Racing try-line in the final 15 minutes of the first half and came mightily close to crossing the whitewash when Ultan Dillane was put into space courtesy of a well-timed pop pass from Paul Boyle.

But last season's finalists came through with the bonus point 🏎#HeinekenChampionsCup pic.twitter.com/gBrlRzlqUv

The second-row galloped towards the line but was denied by a brave try-saving tackle by Iribaren which forced the Ireland international to spill the ball forward.

But Connacht were rewarded for their efforts on the stroke of half-time when Healy beat Teddy Thomas in the air to score after a tremendous cross-kick from Carty.

The fly-half missed the conversion, though, meaning Connacht turned around 19-8 behind.

Racing claimed their bonus-point try with former All Black second-row Bird touching down from short range after another powerful driving lineout from the hosts. Iribaren kicked the touchline conversion to push Racing into a 26-8 lead with half an hour to go.

Racing continued to apply pressure and looked like they were over again but Machenaud’s pass was intercepted by Wootton who ran the length of the field to score with Carty converting.

Beale had a try disallowed after a pass from Thomas was deemed to be forward and Connacht ensured a grandstand finish when Oliver crashed over from short range, leaving the score at 26-22 with four minutes to go.