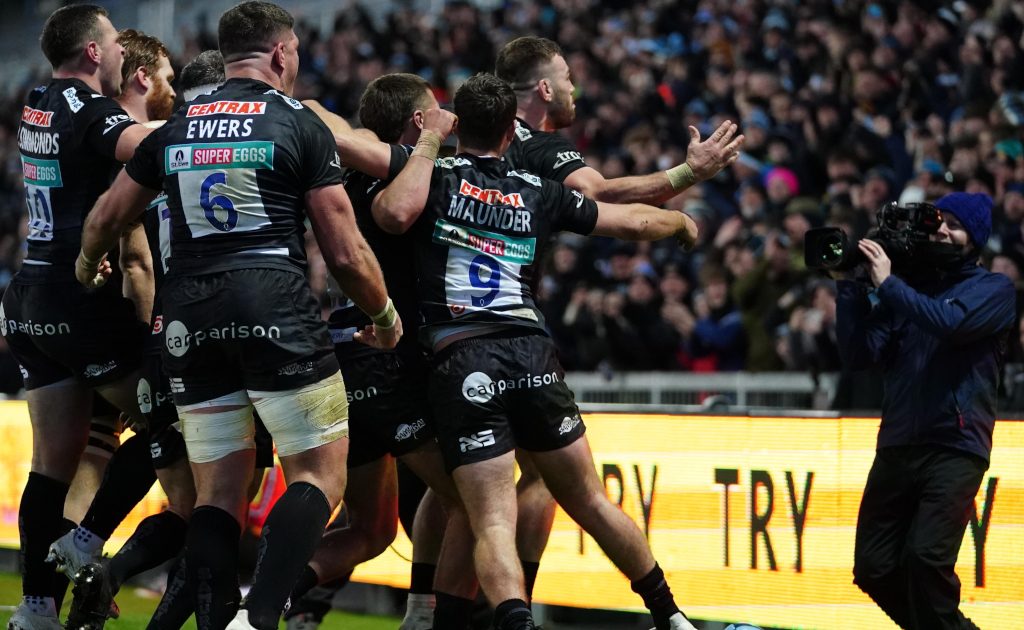 It was a tight and physical affair but tries from Tom O’Flaherty and Luke Cowan-Dickie, allied by eight points from the boot of Joe Simmonds, proved to be just enough for Exeter.

Rob Baxter’s men have struggled at times this season but this result could be the one which gets them back on track.

Centre Alex Lozowski supplied all of Saracens’ points through five penalties, but a losing bonus-point was all his team collected.

The game had been billed in some quarters as a grudge match, with Saracens making a first trip to Devon since returning to English rugby’s top flight after being relegated last year and fined more than £5million for persistent salary cap breaches.

Exeter lost the 2018 and 2019 Premiership finals to Saracens at Twickenham, and they did not hold back in subsequent criticism of their fierce rivals as the full salary-cap saga unfolded.

It raised the ante for a sold-out showdown, but it was more workmanlike than spectacular throughout the 80 minutes as Exeter prevailed

England international Cowan-Dickie returned after a seven-week injury absence for Exeter and captained the Chiefs, while Scotland lock Jonny Gray made his first appearance since undergoing shoulder surgery during the summer.

Saracens were boosted by England back Elliot Daly returning following four months out through injury – his last appearance was for the British and Irish Lions against South Africa – with Ben Earl featuring in the back row and wing Alex Lewington also starting.

The visitors struck first, going ahead after five minutes when Lozowski kicked an angled 40-metre penalty, and Saracens shaded the early sparring in terms of territory.

Exeter, though, looked to have taken an 11th-minute lead when Sam Simmonds dived over Saracens’ line following a Joe Simmonds kick and Jack Nowell break, but it was ruled out for Henry Slade being marginally offside.

It was a let-off for Saracens, but Exeter drew level through a Simmonds penalty early in the second quarter after referee Luke Pearce marched the visitors back 20 metres when Billy Vunipola twice made his views known to the official.

A second Lozowski penalty edged Saracens back in front, yet there was no real pattern or flow to a game littered with errors and poor technical discipline.

But Exeter went ahead for the first time a minute before the break after Joe Simmonds’ pinpoint kick towards the corner flag was caught by O’Flaherty, who out-jumped Saracens scrum-half Aled Davies and touched down.

Simmonds drifted the conversion attempt narrowly wide as Exeter took an 8-6 lead into the interval.

Lozowski completed a penalty hat-trick early in the second period to nudge Saracens back in front, yet the lead proved short-lived as Exeter responded with a trademark try.

Saracens could not defend a close-range lineout, and Cowan-Dickie claimed the touchdown, with Simmonds’ conversion making it 15-9 to the home side after 57 minutes.

A second Simmonds penalty gave Saracens further cause for concern, although Lozowski gave his team renewed hope by landing two penalties in as many minutes to set up a tense finale.

But Exeter closed out the contest to claim a crucial four points and set themselves up for two weekends of action in the Heineken Champions Cup against Montpellier and Glasgow.

Winger Ollie Hassell-Collins scored a hat-trick as London Irish continued their good run of results with a comfortable 43-21 victory against Newcastle Falcons.

The Exiles have now lost just one of their last eight games in all competitions and they were clinical in running in six tries at a chilly Brentford Community Stadium.

Kyle Rowe, Steve Mafi and Agustin Creevy were hosts’ other scorers, while Sean Robinson, Callum Chick and Adam Radwan went over for the Falcons.

Irish certainly gave signs of their growing maturity as they saw out their third win of the Premiership this season without fuss and backed up last week’s victory at champions Harlequins.

It was a tough day from start to finish for the visitors, who lost lock Josh McNally in the warm-up and then saw both half-backs, Ben Spencer and Danny Cipriani, forced off injured during the first half.

Mike Williams, McNally’s replacement, was sin-binned for a high tackle during the first period as the Saints marched to four tries, two of which came from Juarno Augustus.

Rory Hutchinson and Tommy Freeman also scored before the break, while Bath responded through Sam Underhill and Lewis Boyce efforts.

The away side threatened early in the second half, forcing Sam Matavesi into the sin bin and scoring through Will Stuart.

But Saints came to life once again, and Courtnall Skosan’s double made the game safe for the Saints, consigning Bath to their ninth defeat in as many league matches this season.

The hosts were much the better side for the opening 50 minutes and had the bonus-point wrapped up after half-time thanks to tries from Gareth Simpson, Duhan van der Merwe, Ted Hill and Will Chudley.

At 32-14 down, the visitors looked out of the contest but, to their credit, the injury-stricken side came back and almost snatch the victory as Dan Frost, Sam Wolstenholme and Tom Willis touched down.

That final try for Willis left Jimmy Gopperth with a conversion to win the match but the playmaker was off-target.