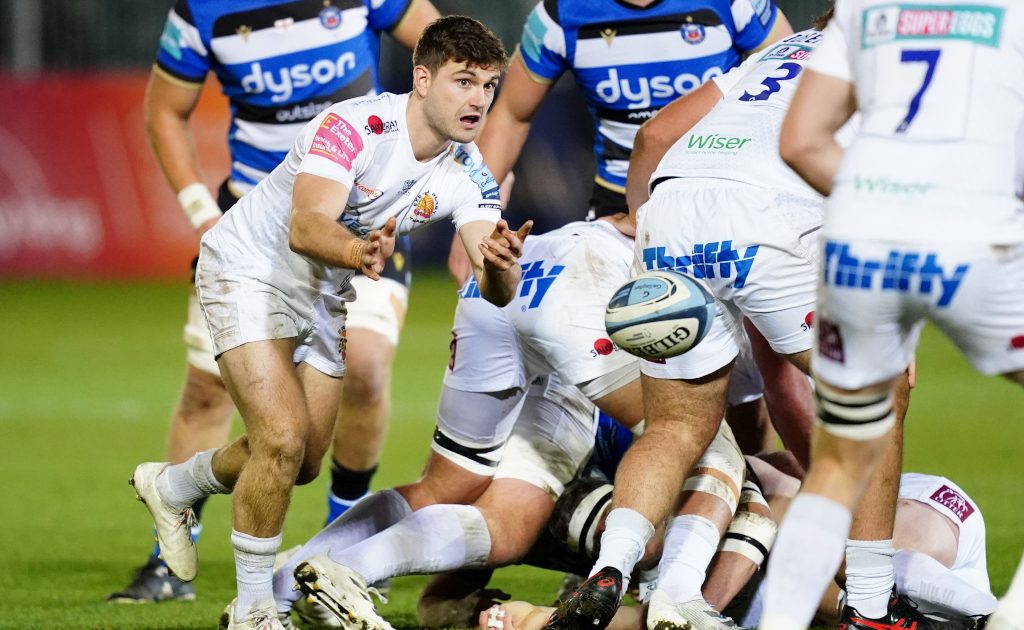 A late try from Sam Simmonds helped Exeter Chiefs come from behind to beat Bath 23-16 in a tense Premiership clash at the Recreation Ground on Friday.

Bath were leading 16-13 until three minutes from time, when the Chiefs number eight crashed over off the back of a scrum, with England team-mate Henry Slade slotting the conversion. There was still time for Sam’s younger brother Joe to knock over a penalty.

Bath had looked equal to the challenge for much of the game but a losing bonus-point leaves them rooted to the bottom of the table, looking to recruit a defence coach after an external review into their abysmal form before today.

With Ben Spencer a reassuring presence after recovering from a hamstring injury, they took the lead within three minutes as half-back Orlando Bailey landed a penalty from fully 45 metres on the left.

Slade replied from an easier angle shortly after to get Exeter on the scoreboard but the visitors struggled to secure line-out ball against a Bath pack bolstered by internationals Sam Underhill, Will Stuart and Josh Bayliss.

Their set-piece problems did not end there and a scrum penalty allowed Bath to build pressure at successive lineouts in the corner before Miles Reid forced his way over in the corner from a catch-and-drive in the 21st minute, with Bailey converting from touch.

There seemed little wrong with Bath’s defence when Exeter went through the phases at the other end but only mustering a second Slade penalty as try-scorer Reid, nursing a shoulder injury, was replaced by Tom Ellis.

Bath, looking a markedly more confident side than in recent outings, broke out from their 22 through Will Muir, Spencer and Tom De Glanville but Exeter retrieved his kick-ahead as the Rec faithful claimed an obstruction by Scotland captain Stuart Hogg.

One statistic very much in Exeter’s favour at half-time was the 8-4 penalty count and Bath soon paid the price for their indiscipline as successive infringements allowed tighthead Josh Iosefa-Scott to cross in the left corner.

Slade converted to put Exeter 13-10 ahead but the lead was soon cancelled out by a Bailey penalty. The fly-half was proving effective with his deft chips over the Exeter defence but Jonathan Joseph was unable to capitalise.

Although Exeter’s pack now held sway at the scrum, Bath now turned to their all-court game, stringing together multiple phases in search of a second try. The visitors held out and Bath had to be content with a 64th-minute Bailey penalty to edge 16-13 ahead.

With Dave Ewers increasingly prominent in waves of Exeter attacks, the home defence was stretched again but replacement scrum-half Joe Simpson somehow held up Sam Simmonds on the line.

When the Bath scrum splintered, Simmonds was denied again under the posts by Underhill. Exeter opted for another scrum for the penalty advantage and this time the number eight was not to be denied.

Gloucester fend of Wasps to claim away triumph

Gloucester held off a final-quarter rally from Wasps to claim a 35-33 victory in a hard-fought encounter at the Coventry Building Society Arena.

The visitors, for whom fly-half Adam Hastings kicked 15 points, led 23-5 and 35-19 at varying stages in the game but a late yellow card for their England wing Jonny May gave Wasps the impetus they needed and they nearly pulled off a remarkable comeback.

Wasps outscored their opponents by five tries to four with Jacob Umaga scoring two – to go along with four conversions – after Thomas Young, Gabriel Oghre and Alfie Barbeary had crossed.

Billy Twelvetrees touched down twice for Gloucester in between scores from May and Jack Clement, with Hastings slotting over three penalties and three conversions.

Northampton get better of Bristol at Ashton Gate

It was Saints’ first win in the fixture since 2018 and halted the Bears’ minor recovery that had seen them claim back-to-back successes against London Irish and Worcester.

But while Bristol remain in the Premiership’s bottom three, Northampton comfortably retained a top-half place and they did it in bonus-point fashion.

Bristol were level early in the second-half, but they then fell away after tries from hooker Jake Kerr and centre Alapati Leiua, while Biggar’s opposite number Callum Sheedy added two penalties and two conversions.