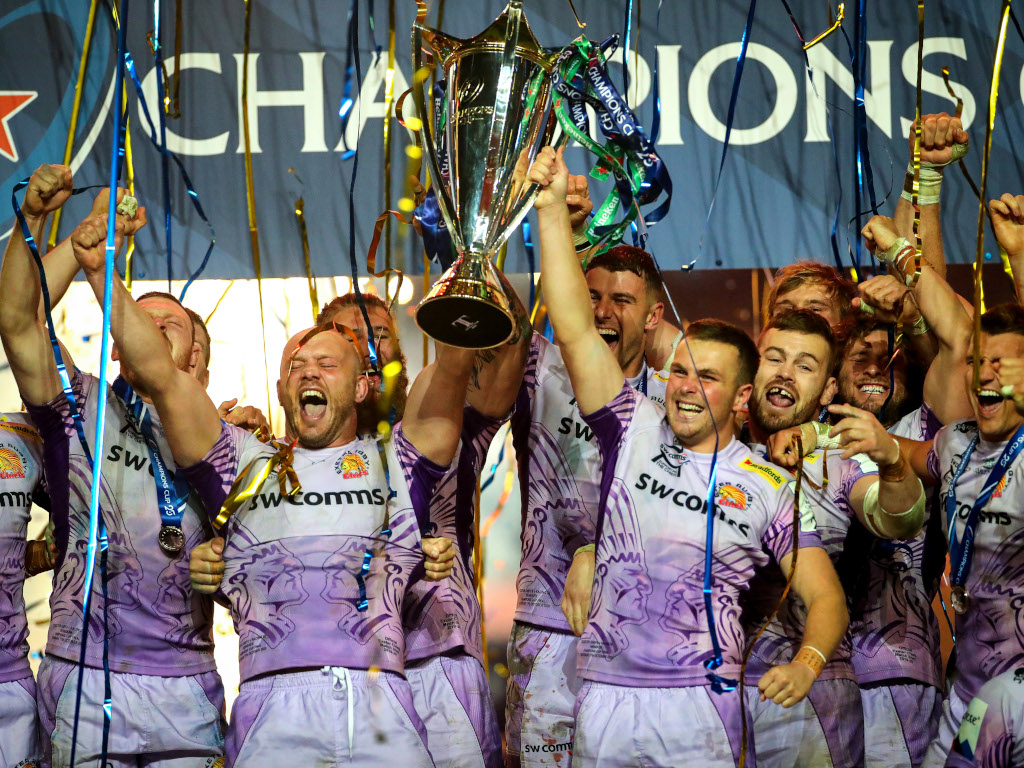 Exeter Chiefs withstood an outstanding effort from Racing 92 to claim their first ever Champions Cup title in a stunning 31-27 triumph in the showpiece event.

The Chiefs conquered Europe in only their 10th season as a top-flight team, ultimately flooring the French heavyweights at Ashton Gate through a combination of irresistible forward power and ruthless finishing.

There was even a pause before the final whistle following Simmonds’ penalty, as officials checked whether there was any time left to still be played, but referee Nigel Owens blew and Exeter could celebrate.

It means Exeter will complete a domestic and European double – a feat achieved by only three other English clubs – if they beat Wasps in next Saturday’s Premiership title showdown.

While Racing suffered a third European final defeat in five years, Exeter marked their debut appearance by lighting up the tournament’s showpiece occasion.

It might have all unfolded behind closed doors – 337 days after a competition severely delayed by coronavirus had started – but there was a box-office quality about the Chiefs as Devon’s finest lapped up every glorious minute, even if a chunk of the second period saw them under prolonged pressure.

The final, which would have been in Marseille five months ago had it not been for the pandemic, burst into life with an eighth-minute try for Exeter – in trademark style, as they drove the Racing pack backwards from a short-range lineout and England international Cowan-Dickie touched down.

Simmonds kicked the conversion and Exeter immediately returned to Racing’s 22, only for the French club to enjoy a major let-off.

Fly-half Russell spilled possession behind his own line and knocked it forward as he tried to retrieve the ball, but Chiefs lock Jonny Hill could not apply downward pressure and Racing escaped after a marginal call by Owens and his television match official went in their favour.

Exeter, though, added a second try just two minutes later, again after their forwards established dominance, and Sam Simmonds claimed his eighth touchdown in this season’s tournament with his brother Joe converting.

But just when Exeter looked in complete control, Racing hit back by scoring two tries in 11 minutes.

Racing were right back in the contest and Exeter needed to reassert themselves. Unsurprisingly, their forwards again came up trumps. The French side were once more powerless to stop drive after drive and this time it was Williams who prospered, with Joe Simmonds’ conversion making it 21-12 at half-time.

A moment nobody associated with @ExeterChiefs will ever forget…

But Racing struck first in the second period, taking less than three minutes before Zebo arrowed over for another score and became only the fourth player to score two tries in a Heineken final.

It was a wake-up call for Exeter, yet they replied rapidly after wing Jack Nowell intercepted Russell’s ambitious pass 20 metres from his own line and found a supporting Slade, who scored and Joe Simmonds converted.

Back came Racing with a close-range score by Chat – Machenaud converted – and the game entered its final quarter with 52 points and eight tries scored.

A Machenaud penalty made it a one-point game with 15 minutes left before Francis was yellow-carded, but Joe Simmonds struck his clinching penalty and Exeter prevailed following an anxious wait for the final whistle.