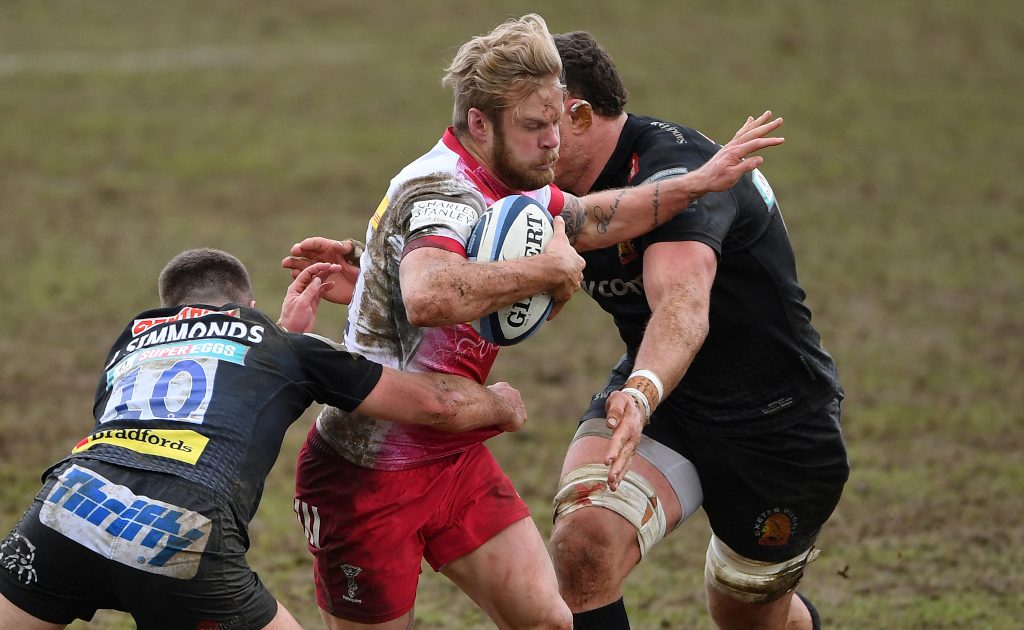 Baxter’s men head to Twickenham for a sixth successive season – only Leicester have played more domestic finals on the bounce – as they look to retain Premiership silverware.

Baxter concedes they are a “dangerous” team playing with “smiles on their faces” ahead of what promises to be a fascinating encounter.

They look so comfortable

“You have to be a fool to not notice what Quins did last week,” Baxter said.

“You look at their players and you can see they look comfortable, they look as though they are enjoying the way they play, and they are playing with smiles on their faces.

“When you get a team like that, it makes them dangerous.

“Bristol have been a good team this season and have beaten most sides, including ourselves, yet Quins made them look pretty ordinary for a good chunk of that game.

“Now, we have to make sure we don’t ever look ordinary in the game, and that means focusing on being the best versions of ourselves we can be.

“That is what I have got to hope the experience of previous finals gives us.

“Being the best versions of ourselves is pretty good and it can win us games, but you do have to drive it, you have to stick at it and you do have to be able to revert to it and bring yourself back to it when you do come under pressure.”

Baxter has named an unchanged team after last Saturday’s play-off win against Sale, including another start at full-back for Jack Nowell, with Scotland captain Stuart Hogg featuring among the replacements.

There are three switches in the Quins side, with centre Andre Esterhuizen returning after suspension, wing Cadan Murley replacing an injured Aaron Morris and flanker James Chisholm preferred to Tom Lawday.

Quins have won 12 of their 17 Premiership games since head of rugby Paul Gustard left his role in January, and they arrive at Twickenham after amassing 748 league points and 96 tries.

“When we lost ‘Gussy’ it meant there was more of a workload, but I think the fact everyone stepped up – all staff and players – made it an easier load to carry,” said Quins’ defence and lineout expert Jerry Flannery, who is part of the coaching staff alongside Nick Evans, Adam Jones, Billy Millard and Charlie Mulchrone.

“When we started off, there was no real pressure on us. When a coach goes mid-season, the expectation is that things are going to fall apart.

“So the bar was very low for us in terms of what the expectations were, and when teams looked at us and how we were going, they probably had a false picture because we were missing a lot of our best players.”

Quins’ impressive transformation has culminated in them making the half-a-mile journey across the A316 to Twickenham for a first Premiership final since they were crowned 2012 champions.

There are those who believe the Londoners have their name on the trophy, but Flannery added: “I don’t think there is anything like destiny or fate.

“If you looked at it at 28-0 down, people would have said Bristol are going to give you chances by virtue of the way they play, and we were aware of that. None of the players were panicking at half-time.

“If you go 28-0 down against Exeter, Exeter don’t blow leads like that. I knew with the way we played, we would still have opportunities against Bristol.”

If Quins are to triumph, then stopping Chiefs’ British and Irish Lions number eight Sam Simmonds – he has scored a record 20 Premiership tries this term – will be high on their agenda.

Flannery added: “How do you stop Sam Simmonds? I don’t know.

“He is incredibly powerful, he can mix it up in wide channels and also punch in close. You can’t give him space or time because he runs like a back and has that big fend.

“He has scored about 400 tries this year, so no-one else has cracked it either!”