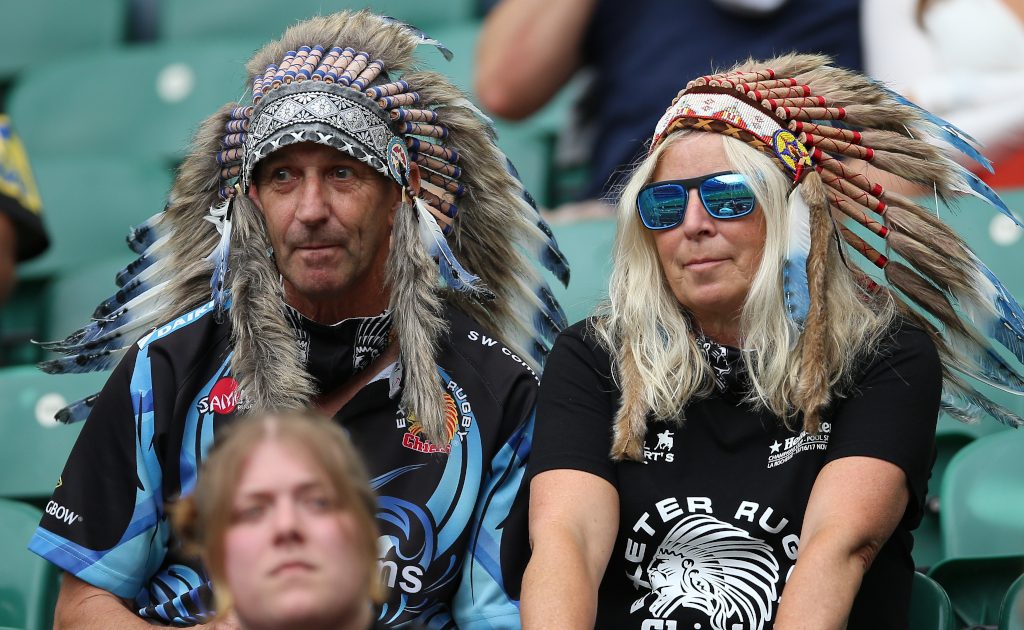 Exeter Chiefs director of rugby Rob Baxter has responded to Wasps’ calls to ban Native American headdresses at their ground as “a bit of a non-story”.

Wasps are calling for a rugby-wide review on fans wearing the attire ahead of the Premiership clash between the clubs at Coventry Building Society Arena.

Saturday’s hosts, who come into the game on the back of beating Northampton, are urging supporters not to wear headgear labelled “cultural appropriation”.

Nothing for us to say

Exeter rejected the option to drop the moniker Chiefs following a petition and club investigation in July 2020, but did retire club mascot “Big Chief”.

The Devon club’s director of rugby Baxter has brushed off Wasps’ criticism as ill-timed, insisting there are more important matters at hand.

“I don’t think there’s anything for us to say on another club’s statement that actually doesn’t do anything,” said Baxter.

“They’ve made a statement saying they’re not doing anything about it.

“So I don’t think there’s anything for us to comment on it, they’re probably the people to ask.”

The Midlands club revealed it had referred the matter to the RFU and Premiership Rugby, calling for a review into whether the headgear should be banned.

When quizzed on whether the statement was released in poor timing given the two sides meet this weekend, Baxter replied: “The timing is what it is.

“I think most people’s view, which is very much the same as mine, is that in the here and now, where we are as a country and the things we’ve been through, I can think of far more important things that I need to focus on, the club needs to focus on and people in general want to focus on beyond whether a supporter supporting a club in Devon’s going to wear a headdress or not.

“I think that’s most people’s view on it, that’s certainly my view on it in the here and now. I’ve got to be careful what I say, I’m not overly affected by it.

“I take a pretty simple view on these things, I tend to look at things in a lot of perspective. And right here and now when you see what’s really going on in the country and what’s really important, that’s what I’m focusing my energy on.

“And I know that’s what the club are doing as well, and people in general. So for me it’s a little bit of a non story.”

Meanwhile, rugby players at all levels of the game will be allowed to wear leggings or tights in matches after an amendment of the sport’s laws was approved by World Rugby’s executive committee.

Previously only females were allowed to wear leggings or tights, but due to the amendment of rugby’s Law Four, all of the game’s participants will now be able to add it to their matchday attire.

World Rugby revealed that the amendment was made because of concerns about possible abrasions sustained by players due to the usage of artificial turfs at various levels of the game.