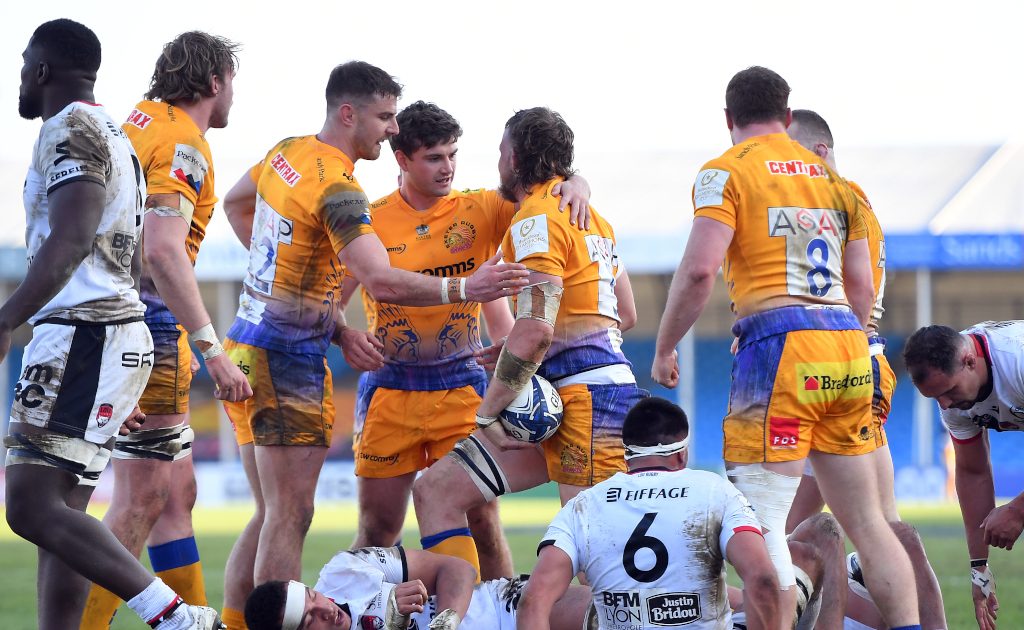 Exeter overcame a shaky start to cruise past Lyon and set up a Champions Cup quarter-final against Leinster with a 47-25 win at Sandy Park.

By the eighth minute Rob Baxter’s European champions had slipped 14-0 behind but through a pair of tries by England lock and man of the match Jonny Hill they clawed their way back into contention.

Further touch downs by Tom O’Flaherty and Ollie Devoto helped them into a 26-20 half-time lead and then the floodgates opened as Dave Ewers, Olly Woodburn and a penalty try swept them clear.

It was a far from vintage display from the error-prone double winners, who welcomed back their stars from England, Scotland and Wales after two months on Six Nations duty and looked disjointed as a result.

Leinster will see vulnerabilities ahead of next weekend’s heavyweight Sandy Park showdown, but Exeter’s strongest team will have benefited from a tough examination by Lyon.

A possible setback was the sight of fly-half Joe Simmonds limping off in the final quarter, while his brother Sam received treatment on an ankle issue, although his departure did not appear to be injury related.

Lyon were playing their first knockout game in Europe and although ultimately outclassed, the Top 14 mid-table side were rugged and dangerous – a point emphatically made when Baptiste Couilloud and Xavier Mignot plundered early tries.

A promising counter-attack was given new life when full-back Toby Arnold accelerated through Ewers’ tackle and picked out the supporting Couilloud to draw first blood in the sixth minute.

And Exeter’s situation deteriorated two minutes later upon losing their own line-out deep in home territory, allowing Charlie Ngatai to throw a long pass that was taken by Arnold before Mignot strolled over.

An ill-advised off-load by Ewers invited fresh pressure on to the Chiefs but on this occasion Joe Simmonds and Henry Slade were on hand to avert danger as Lyon threatened another score.

Exeter settled and clawed their way back into contention when Hill finished a series of trademark pick and goes before O’Flaherty went close from a line-out move.

Their unbeaten run continues 🙌@ExeterChiefs become the first English team into the #HeinekenChampionsCup QFs, and a date with @leinsterrugby awaits 🤩

A little bit excited for that one? 👀 pic.twitter.com/PkkmkXbN4U

The squeeze continued as a collapsed maul resulted in Vivien Devisme being sent to the sin-bin and from the penalty Hill powered over for his second, underlining the Chiefs’ growing superiority in the tight.

On the half-hour mark they crept ahead, Woodburn racing across field from a line-out with help from clever running lines by his centres and sending opposite wing O’Flaherty over in the corner.

The fourth try came just before half-time when Hill declined his hat-trick by sending Devoto over under the posts despite the England lock being within striking range.

Exeter had to roll up their sleeves for 10 minutes of hard graft when the second half began.

It was a rampaging run by Jonny Gray that signalled the end of an attritional period, his long stride and strength carrying him through a number of tackles to set the platform for Ewers to score.

Lyon were now in full retreat, as was their scrum which was sent hurtling backwards towards their whitewash before disintegrating, coughing up a penalty try.

And the final blow was delivered when Stu Townsend grubbered for Woodburn to touch down, before Dylan Cretin crossed in injury time for the French visitors.