Home England Exclusive: Wayne Barnes on Japan, 2007 and his future 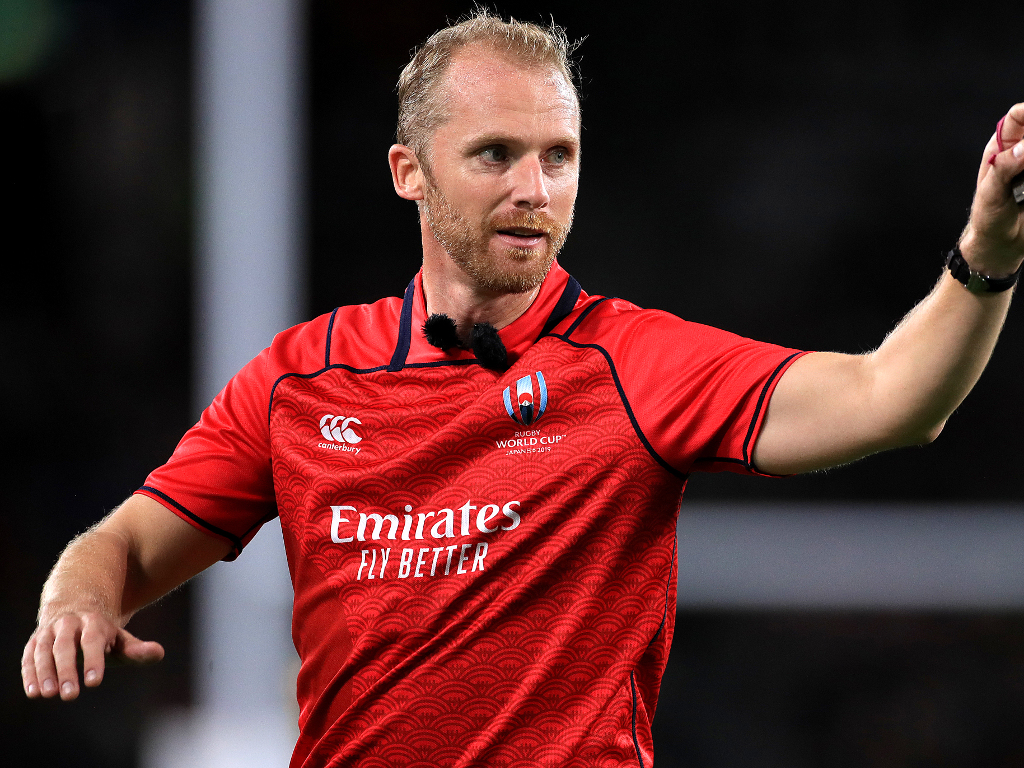 In a world full of conflict, outrage and fake news, one constant remains in Rugby Union; the outstanding refereeing of England’s Wayne Barnes, one of the most admired and respected officials in any sport across the globe.

With a legal mind, an athlete’s body and the rare wit of an after-dinner speaker, Barnes is the master of fusing game management with adherence to both the spirit and the letter of the law.

Planet Rugby caught up with the West Countryman after his outstanding officiating in his fourth World Cup, to discuss the future of both the game and of Barnes himself.

With his fourth Rugby World Cup done and dusted, and unlucky not to officiate in the final stages due to England’s progress, Barnes believes that both the tournament organisation and the rugby played was of the highest order.

“What a great eight weeks! I can only commend World Rugby for a competition that will go down as a daring move but a phenomenal success,” he remarked.

“There’s been many press tributes to the people, but the way Japan embraced the sport was quite exceptional – the colour, the passion and the professionalism of all will remain with me for many years.

“The hospitality of the locals was something of legend. I well recall after the France v USA match, Ben O’Keeffe and I were having a quiet moment and a little review of our day in a bar made from a shipping container in one of the car parks, when a Japanese spectator offered us a drink, which then turned into dinner, which subsequently ended in a night of singing in a wonderful Karaoke bar; we’d never met this chap before and his generosity, driven by a desire to make us feel welcome in his country, was characteristic of everyone we met over there and every single player and official could relate similar positive experiences,” explained Barnes.

“I noted that for the Japan v South Africa quarter final, the local TV audience was something like 60 million – to put that in perspective, the legendary EastEnders ‘Dirty Den’ episode only made 30 million and that’s when there were only four TV channels,” he quipped.

“This of course was underpinned by the incredible performances of the Brave Blossoms themselves. I think everything that’s been written about them is deserved, but one little take out for you is that in that quarter-final against South Africa, when faced with a much bigger side, their game strategy was exceptional despite their defeat. Not ONE single box or touch kick from their half-back in 80 minutes underlined their knowledge of playing to their own strengths and I’ll be interested how their development progresses.”

"He has put in very consistent and accurate high performances in Tier 1 games and this recognition is richly deserved.”

What goes on tour

For the watching spectator or professional scribe, it was clear that the match officials had clear protocols that they adhered to, but that those decisioning processes were based upon immense teamship and the close bond between the group of referees, assistants and TMOs, something Barnes believes is crucial for success.

“For us as a group of officials, we become very close during a tournament like this. It’s fair to say we build friendships that stay for life, rather like a group of players on an international trip such as a Lions tour. And of course, the more we share on pitch and off pitch experiences, the more effective our communications and subsequent decisions are. We’re just like the players that we all love a pint, a rugby yarn or two but at our core, we absolutely love the sport itself. Learning from each other is key and our social time together aids that greatly.

“It was quite sad towards the end when you realise it’s the last time we would be together as a group and we shared a small time sending Jerome Garces off in style, a man that’s become a real mate over the years and someone who’s been an outstanding servant to the sport.

“We will of course stay in contact – every time I visit the various nations, I’m always catching up with my current and former colleagues and my life is certainly richer for the friendships I’ve forged during those 13 years in the international game,” reflected Barnes.

After a couple of incidents in the first two rounds with unacceptable tackle heights and subsequent cards, the competition was a paragon of fair play and respect. With four hard-fought pools and some surprises in results, Barnes was particularly pleased with the way the teams reacted to the spirit of the law changes.

“The success off pitch was mirrored on pitch and I would like to congratulate the players and officials for working together, particularly around tackle heights. World Rugby, the coaches and the game professionals have worked hard to get our game safer and to extend player longevity.

“What was pleasing was a desire to take the laws as a given. There’s a difference between knowing to the law changes and understanding the reasons why those amendments have been made and what we saw was a genuine desire for behavioural change on the pitch from all concerned, a quantum step forward for the sport.

“With regard to the tackle height, a simple explanation is we wanted to see people tackling below the line of the ball. Put simply, if you’re hitting the ball zone when people are carrying, then you’re not in control of the point of contact. The ball is fairly elastic and many impacts are worsened by shoulders slipping up the ball into the jaws and chins of the carrier, or with the players bouncing off it, thus rendering them unable to wrap their arms at the point of contact.

“As a by-product of the lower tackles, we saw some ferocious legal hits that were never dangerous; I urge any player to look at Sam Underhill’s technique, a model of legal aggression. And we also saw an ability for carriers to free up arms and create continuity via offload, thus creating a fast and flowing spectacle; in short, win/win for all, created by good application of the Law and a commitment to that behavioural change by the teams,” noted Barnes.

With the World Rugby Game Review board now sitting, the performances of all will be scrutinised with the aim being to improve the watchability, safety and skills of the sport. Barnes believes this a good initiative for the game and looks forward to a few tweaks to underpin those aims.

“For me it’s all summed up by one phrase – ‘eliminate the dormant moments’.

“I’m quite sure that things like caterpillar rucks will be examined, together with a vision of tweaking the Rugby League 50/22 rule into Union to reward footballing skills. Half-back box kicking will be scrutinised too, with also a look at how we remove congestion and increase space around the gain line areas and there will also be views on improvement of breakdown clarity too.

“We need to make sure the safe tackle framework is implemented at all levels – creating workable sanctioning to ensure player safety at all levels of the game, and I do believe, as noted before, the World Cup saw a quantum stride in that area.

“The biggest legacy for me though is how the coaches, players and officials have worked together for the benefit of the game – when we discuss game health, the fact we all appear to be on the same page is probably the biggest positive of all,” he reflected.

🗣️ "The building blocks are there with the talent already identified."

Back to the future

With four World Cups behind him, Barnes’ reputation within the game has never been higher. What does the future hold for the engaging Englishman and what can be done to recruit the next generation of outstanding officials?

“Well let’s put the record straight! Rumours of my retirement are grossly exaggerated and, as it stands, I’m available for international duty and I’m looking forward to getting stuck into the next round of the Gallagher Premiership.

“My stock appears to have risen from being voted after my first World Cup in 2007, officially the third most hated man in New Zealand to getting the World Rugby Referee of the Year Award in 2019, which is quite a contrast!

“Indeed, at one point, in Cowboy’s Bar in Queenstown, I was somewhat disturbed to find a rather compromising effigy of me in the washrooms for disenfranchised fans to take aim at, but I’m reliably informed that in recent times Donald J. Trump has replaced me as the target of Kiwi ire,” chuckled Barnes.

“However, on a more serious note Japan 2019 was a remarkable experience, a journey of of fun and success that’s testimony to everyone involved as players, officials or fans.

“My award was one earned by the outstanding work and support of my colleagues; I see it very much as a team effort, one I couldn’t possibly have achieved without the support of the professional refereeing community, especially those involved with the shop window of the game at the World Cup itself.

“I’ll spend a little time now focusing on the family, with my kids starting school and keep a clear head about the future. I’ve had 13 wonderful years at the top and when I do call it a day, it’ll be more of a quiet pint with my refereeing mates at The Sun in Richmond rather than any big statement or fanfare,” explained Barnes.

“With regards to people taking up the whistle, I urge recently retired players, or those with an interest in the sport without wishing to commit to playing, to give it a crack!

“We are a wonderful little community and we all want to get better via interaction and it’s great fun. The comradery between players and officials has always been a unique characterise of the sport and to be honest, that’s what’s always been the high point for me.

“As long as I am still enjoying that, rugby will remain a large part of my life.”

We thank Wayne for his time and wish him well for the future.

For those interested in participating in rugby, the RFU’s work to recruit and train more coaches, referees and volunteers was initiated prior to 2015 and has continued. The last three years have seen over 100,000 attendances on training courses and there has been an increase in uptake of online learning and digital content. There has also been a significant effort made around diversification of this workforce, most notably the Young Match officials programme and focused work to engage more women in coaching and refereeing. The “Keep Your Boots On” campaign has also retained a good number of retiring players in the game as coaches and referees.

Anyone looking to get involved in refereeing can find out more here.