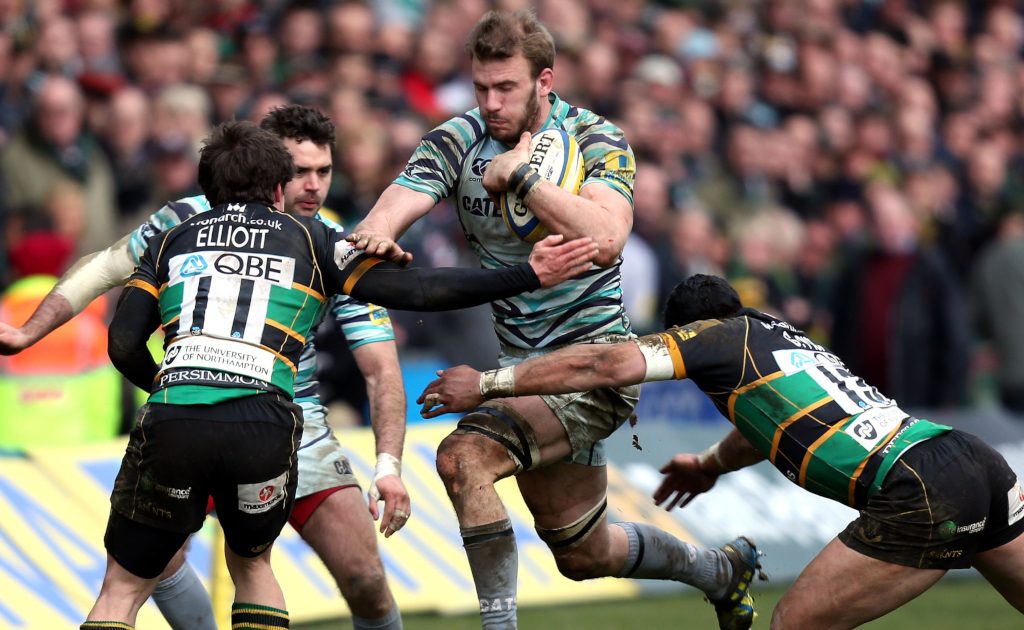 With Leicester Tigers and Northampton Saints both starting the season in fine fettle and both displaying cracking form, former British and Irish Lion Tom Croft joined Planet Rugby features writer James While to discuss just how important this traditional fixture is.

“Within the first few weeks of my career as a Leicester Tiger I learned that this game was absolutely everything for both clubs with their incredibly loyal supporters,” Croft said.

“This was the game we looked for – the first fixture I’d try and find when the season’s games were announced. It was the game where I’d feel the biggest anxiety and nerves, more so than even a Lions or England Test, and although it had no more points on offer than any other match, the result would have a dramatic effect on the squad. It epitomises the emotional intensity that’s needed to perform at the highest test level and those of us who played in it really benefited from the pressure the history created for us.

“I always used to break this down simply. I live in Market Harborough, right at the bottom of the county, and all I wanted was to be able to go into my local pubs with my head held high. If we lost, I’d lock myself away for a few days, such was the shame!

“With the likes of Martin Johnson, Lewis Moody and Martin Corry around, you were left under no misapprehension as to the importance of winning. On the Tuesday before the match, the training would simply fly up a level or two, real physical intensity, driven by the likes of John Wells who’d be wandering around the pitch spitting out comments that are absolutely unprintable on Planet Rugby, winding us up to a frenzy and leaving us under no illusion as to what he expected.

“Looking forward to Saturday, Northampton Saints come into this four from five (already having their ‘bye’ round) with Leicester Tigers six from six. Put simply, there’s nothing to choose between two wonderful teams and I really expect this one to go right down to the wire.

“What is really interesting is both sides have been based upon and are true to the DNA that I saw when I was playing. Tigers are organised, powerful, brutal up front with a great set-piece, while Saints love to run the ball, attacking with width and mobility, just as they did in the days of Bruce Reihana, Ben Foden and Chris Ashton. There’s very little to chose between them in terms of the result and it’ll be very much the side that seizes the big moments on the day will win the game.”

“The myriad of great head-to-heads kind of prove my point about the closeness. George Ford v Dan Biggar; well, there’s two world-class 10s there that simply cancel each other out. Both are very territorially wise, knowing where to play the game, and both have a great kicking facility, with the ability to launch passes through the middle,” Croft said.

“At full-back, Freddie Steward is a player I knew would play for England the moment I saw him. He’s like a bigger version of Geordie Murphy: untouchable in the air, power and gas into the line. Tommy Freeman is slightly different, more of a touch player, who makes some clever incursions into the line time and time again.

“At lock, we can see Harry Wells and David Ribbans go up against each other to try and get through the England selection door, which appears now to be ajar, especially considering the paucity of locks Eddie Jones currently has at his disposal. Wells is a wonderful clubman; he does all of the core set-piece things brilliantly and I was delighted when he was capped in the summer. He’s a bit of a nutcase around the group but he brings workrate, set-piece knowledge and dependability to every pack he plays in and is an integral part of the Tigers catch and drive routine.

“Ribbans is a real athlete who perhaps has been unlucky in England terms. He’s huge, quick and has a nose for the try line. He will be devastated not to be around the England squad and will want a big performance to remind Jones he’s still around.

“Whilst all local derbies are tough to call, I do feel the one point of difference between the two sides is the power of the Tigers front-row. I don’t need to sell Dan Cole to you; he’s there as ever, puffing and grunting on the tighthead with his shirt rolling up to reveal the whitest belly you’ve ever seen on a human being. Ellis Genge is fast becoming a world-class loosehead and both are supported by Joe Heyes as an upcoming tighthead and Nic Dolly, the new hooker that has already bashed his way into the EPS.

“It’ll be a fantastic day, but with wet weather predicted and a notional advantage in the front-row, I reckon Tigers should see it home, just to ensure I can show my face in my local pub again!”

We thank Tom for his time.

BT Sport is the home of Gallagher Premiership Rugby. The 2021/22 season continues with a weekend full of games, including Leicester Tigers v Northampton Saints live on BT Sport 1 at 3pm on Saturday 30th October. Find out more information on how to watch at BT Sport bt.com/sport