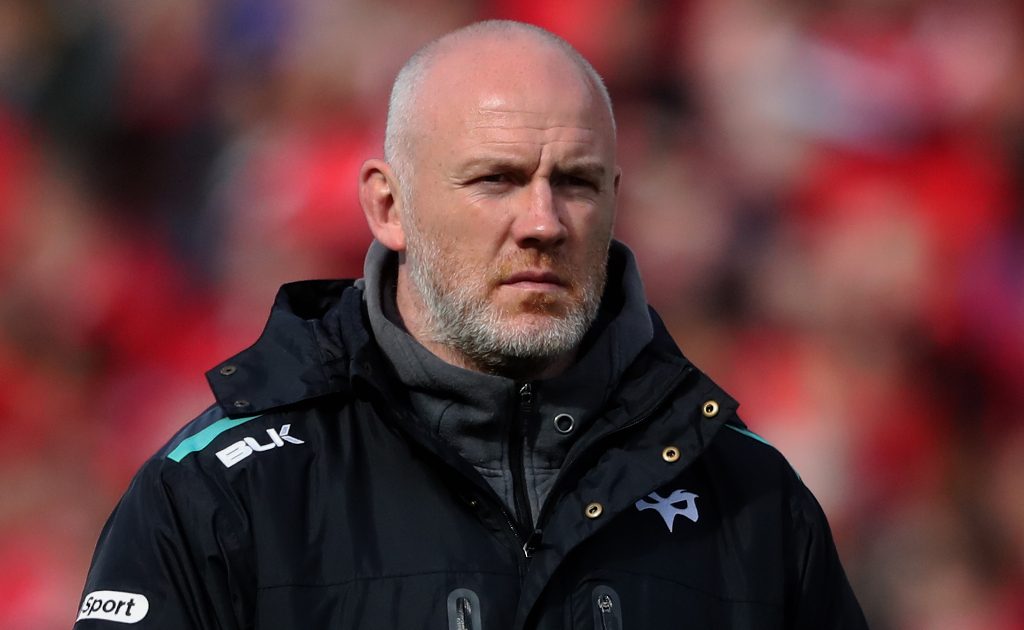 Planet Rugby features writer James While spoke exclusively to British & Irish Lions defence coach Steve Tandy ahead of the series with the Springboks.

Tandy has been the man responsible for putting the sizzle and strength into Scotland’s defence over the last couple of seasons and rightfully has been selected to bring together the Lions defensive strategy in South Africa.

A former openside flanker with a combative reputation, who went on to lead the Ospreys as head coach, he travelled to Australia and reinvented himself as a specialist defence coach. He found time to speak exclusively to Planet Rugby ahead of the British and Irish Lions trip to Jersey next week.

Spend two minutes in the company of Tandy and you realise he’s a people person, a man that enthuses defence but craves teamship.

He’s fascinated by what makes players tick and he’s obsessed by creating an environment for both open expression and high achievement. He relishes connecting with his charges and unpicking what motivates them to succeed, but with only two months preparation before facing South Africa, the world champions, he labours under no illusion of the enormity of his task.

“The key to making things work in such a short space of time is to quickly assess the commonalities between the various systems the guys selected have been using at both international and club levels and then to develop our identity around those commonalities,” he explained.

“This is about collaboration, not prescription. We need to identify effective themes and general principles of good defence that work for all of us, and from that, create key blocks of good practice that everyone is prepared to own organically. The last thing I want to do is to bring in ideas that are unfamiliar to the group and it’s also important to allow the players to collaborate inside the framing that we, as coaching leaders, give them, in order that they create a canvass of defensive system within that frame that is theirs to own and develop.”

He continued: “We cannot enforce a one size fits all approach and the defensive units have already done a lot of collaborative discussion on Zoom calls and the like to iron out how we work together, calls were we as coaches let the players lead the debate. As a simple example, even within similar positions, players defend differently and that brings contrasting strengths to our offering; put simply, Tom Curry defends in a completely different way to Hamish Watson despite both playing in the same shirt, and the same can be said for Alun Wyn Jones and Maro Itoje, who both offer huge power in defence, but their styles are entirely different.

“In order to succeed, we need to harness those differences and in doing so, encourage the players to express themselves as the brilliant athletes they are. One of the key elements to develop performers of this quality is to first understand and acknowledge these are outstanding rugby players, all world class exponents of the game, and to treat them as such, respecting why they have been selected in the first place. My role is to facilitate their growth and excellence, inspire them to make great decisions rather than telling them what to do in that prescriptive manner that I alluded to.”

Pride without the ball

“One of the key themes I want to develop is that of ‘pride without the ball’. I want us to relish the defensive roles, to be as energised and excited when not in possession, as we are when we are in possession. That’s all about mindset – physical aggression and mental clarity fused to allow the player to make great defensive decisions, ones that allow others around them to also fix into the system we employ and options that work inside the framework of good practice that we’ve identified,” he enthused.

“A Test series in South Africa has its own very unique demands and the mechanisms we employ out there might be very different to the way we might approach a series elsewhere such as New Zealand or Australia. Sure, we know it’ll be a massive head-to-head battle, one of force on the gainline, but thinking in binary terms like that is disrespectful to the all-court game these outstanding world champions possess. They’re a smart side and we need to be equally smart; they can go through you, around you or over you and in particular, defending width and the pace they have on the flanks will be a key focus for us. We will work on that key 13/14 channel D with vigour and intellect, using smart defending whilst always maintaining the fire in the rush or blitz. To consider them only as a route one side would not serve us well and above all, we need to acknowledge their versatility and ensure our players that make smart defensive decisions consistently to maintain our pressure,” noted Tandy.

“Whilst many will talk about the speed with which the player combinations gel, it’s also important to acknowledge the coaching team need to bond quickly too, and I have to stress that we don’t work in blissful isolation of each other! As a simple example, Robin McBryde, someone I know very well, will be running the set-piece and it’s essential that Macca and I form an understanding of how and where we work together on the defensive systems.

“A simple example of this will be our line-out defence – it all needs to be joined up, from the initial formation of the line (do we need a tail gunner? Are we using a traditional scrum-half or a back-rower there etc?) to the aerial pressure, speed across ground to create that aerial pressure and the decisions whether to compete or to drive. Then you need to bolt on how you treat the blindside at scrum-time, how Faf de Klerk is likely to leverage the close areas to the scrum and so on – it’s absolutely all about the coaching group collaborating to create a whole, rather than any form of silo coaching of our own specialisms,” he explained.

“Then there is the real detail, and that’s a case of meticulously watching what we are doing and what the opposition tend to do. That also extends to helping the players react to each other’s strengths – as a simple example, we have some players that are capable of rag-dolling at the tackle to move and slow the point of ruck, and then we have players that look to stand away and then clamp over the ball the moment the player is moved to that ruck position. Understanding each other’s skills in those areas allows the players to react positively and to anticipate likely outcomes, thus making us much more effective as a team. The only way to achieve that is through detailed analysis and open communication and that relies as much upon player input as it does coaching analysis from the back room staff. The by-product of this process is that players don’t become over-focused on one specific aspect and they become much more aware of what’s happening from their team-mates.”

He added: “Above all, systems take care of themselves but if we can be aware enough to react to their changes, either in attack or defence, throughout the game, then we will do well. I want to create an environment where the players own their process and to create a calm faith in the principles we adopt. If we do that, we’ll go well and I cannot wait to see the players becoming excited and energised at the prospect of working together as one.”

We thank Steve and the British and Irish Lions for their time in producing this interview.