Planet Rugby features writer James While speaks to Harlequins’ Head of Medical Services, Mike Lancaster, about how they are dealing with Covid-19.

When Lancaster chose to follow his passions for medicine, fitness and rugby, it was done so with an aim of finding marginal gains, winning silverware and immersing himself in the relentless mickey-taking culture that forms the values of the rugby we know. What he didn’t expect was to fight an opponent of his own, man to man on and off the pitch; that opponent called Covid-19 which has swept the sport we know and the society we live in.

Adaptation is the name of the game, and Lancaster spent an hour out of his busy schedule to speak to Planet Rugby to explain the immense challenges of his working week and to assist to educate the rugby watching public of the magnitude of the task that he and his colleagues face.

“It really is a huge learning curve, one that requires strong attention to detail, and one that relies upon the absolute commitment of all of the Harlequins staff, from cleaners to Head Coaches, in order to allow us to play and to put on the entertainment that the wider rugby public so desperately craves in these demanding times. We have to be fully on point in every tiny detail; clear, concise and deadly accurate, in order to maintain the agreements we have in order to play.

“In Lockdown V3, we’re now in a situation where we’ve got the process nailed down as far as we ever can, and I must shout out Matt Cross and his amazing team at Premiership Rugby who has led the evolution of the daily structures and testing protocols we adhere to.

“My week is pretty rigorously structured; Monday is our big ‘PCR’ test day – we cover something near 100 members of staff, all in a strictly controlled and sanitised environment, with clear wayfinding to maintain social distancing. It’s a complex arrangement and immensely time consuming, but we cannot be complacent when we are dealing both with individual health and holistic ‘Game Health’.

“We have a testing turnaround window agreed and we normally get the results filtering through around 3am on Tuesday. When it all kicked off, I confess I used to be looking at my phone in the early hours but now we’re kind of used to it, and I have been known to have a lie in until 5am!” smiled Lancaster.

“The absolute key to our approach is to remove any form of judgment or blame if we get a positive test. The key message is ‘don’t worry’! The virus is indiscriminate and within the strong team cultures that exist in any of the Premiership clubs, the first reaction can naturally be one of disappointment followed by a feeling that ‘I’ve let the lads down’ and it’s crucial to mental health and well-being that we remove that ’emotion of failure’ from the player. 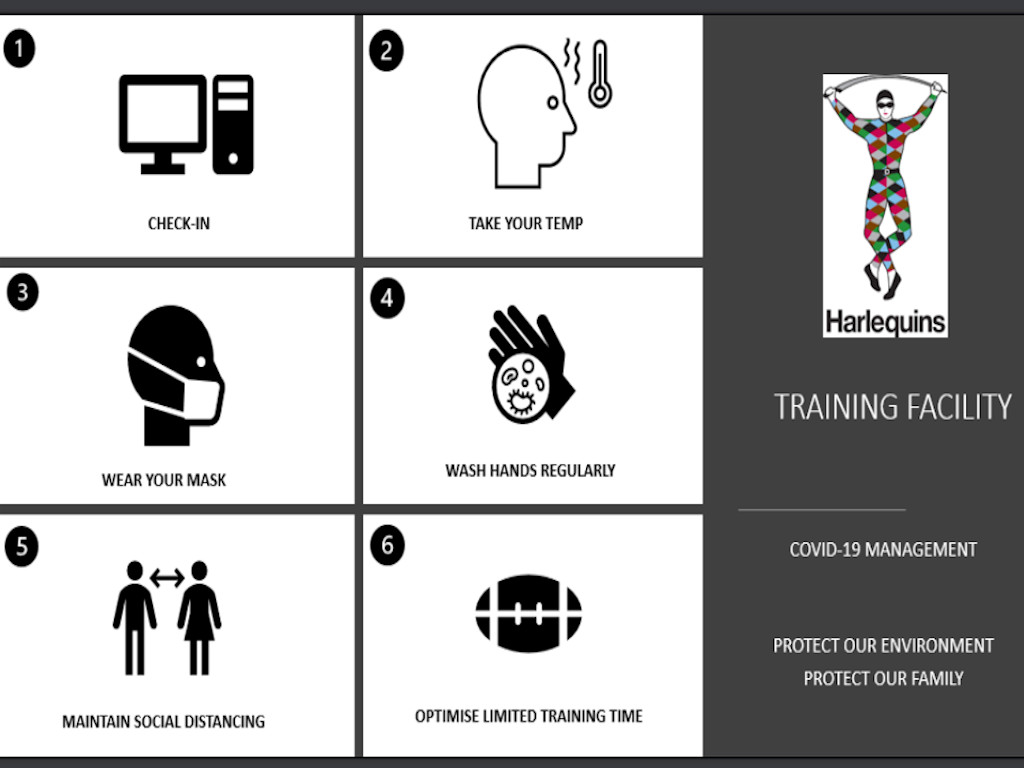 “Once the individual has digested the information and we’ve managed his emotions, we have to inform the wider Premiership Medical Group, the Covid Manager at the club we have just played, and Paul Gustard and the board. We are considered in our approach; we want to instill confidence, we want the player(s) to be open and honest with us, giving them room to accept the situation when they are feeling they’ve made an error personally. It’s about trust in the process, just in the way a Defence Coach will drill his system into the players – get the process right and the rest falls into place,” explained Lancaster.

“The next call is to inform the RFU and the PGB who will implement secondary checking, followed by notifying PHE (Public Heath England). We’re very close to Royal Surrey Hospital and have partnered with them to check local rates, to understand Covid spikes locally and to share the information we both hold. We’re fortunate they’re literally over the road from us and we’ve a very strong relationship with them.

“Many have questioned the late cancellations of some of the fixtures, but it’s key to isolate immediately to deliver the fastest return to play.

“We’ve had one case in a game at Harlequins so far,” said Lancaster, whilst frantically touching wood.

“In this instance, it was a front-row forward off the back of the Bristol game and we acted quickly to minimise the immediate risk, isolate as per the protocols, inform the opposition, and that meant we only had to scratch one fixture. Ironically, Bristol reported a case, the opposite number in that game, so we know our system works and was absolutely vindicated on this occasion.

“We’re now in a phase where, with the identification of new strains with more transmittable power, that we’ve had to up our regime even further. We limit face to face conversations, we make sure all are masked and we cap our training time, with distinct plans for contact training based upon short, sharp planned sessions.

“The matchday dressing rooms here have become far too small; we have converted the Mike Brown Bar area into a facility so players can socially distance; the two teams enter the pitch from opposite sides of the ground and all back-room staff, coaches and replacements must adhere strictly to mask protocols. We even review the footage of our bench to make sure they’re following our plan – team manager Graeme Bowerbank and I have become almost the ‘Fun Police’ to the players, but underneath the banter, they know we are doing it for them,” admitted Lancaster.

“One thing that should also be mentioned is Covid affects people in different ways. Some are asymptomatic and suffer very little; others have temporary reduced respiratory function. After review with our Doc, George Bownes, they will enter a graded return to play – similar to HIA, but reliant on respiratory and cardiac screening, where we measure peak flow. A healthy athlete should score between 650-700ml on his or her peak flow, but with Covid infections, that score can see a short term drop, which is a salient reminder of how brutal infection can be. 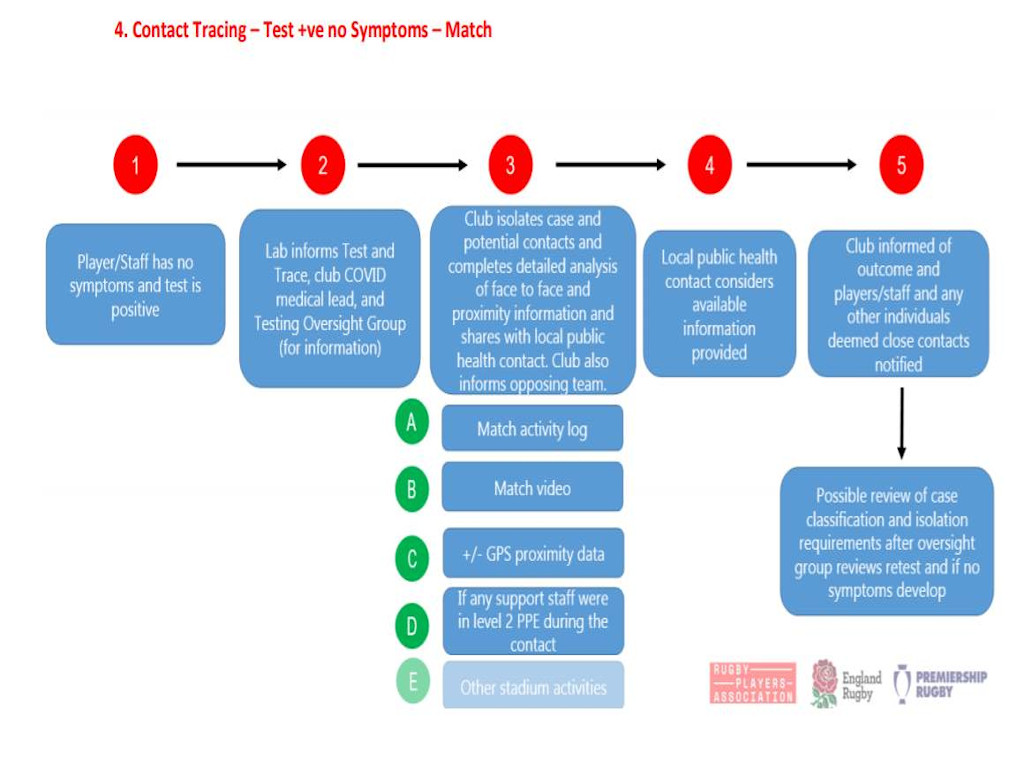 “As things move forward, we cannot afford to relent. We have to remove any non-critical contact – even try celebrations, warm-up contact and the like. It’s about stripping contact to the bare minimum, reinforcing detail whilst ensuring the players are prepared to play, briefing them clearly on protocols and regulations. The key phrase is ‘risk mitigation’ and we’re all incredibly focused on maintaining the minimal risk profile possible.

“As players now go into international camps in a couple of weeks, those protocols will go up another level – staying in a hotel bubble will require players to eat meals in their own rooms and generally live in a very controlled environment. The international game has even less flexibility than Premiership matches and the game can ill-afford any disruptions to a very fragile schedule,” explained the Quins medic.

“In closing, I would ask that people watching or following the sport, those who can’t play right now and so on, just to bear with us. We’re doing everything we can to remove pressure on our players and staff, to destigmatise testing positive and to create objective measurement to make sure we’re doing the right thing.

“It may not be what I or others originally signed up for, but a team stays together through everything and, in this instance, all of those within the professional game are ‘our team’, and the collective camaraderie, will to win and commitment we’ve all shown is the reason why rugby union is still in action and remains such a special sport.”

Planet Rugby wish to thank Premiership Rugby, Harlequins and Mike for their time in putting this article together.

Mike Lancaster is Head of Medical Services for Harlequins Rugby Club, a Chartered Physiotherapist with 20 years’ experience in professional sports in the UK and abroad. He spent five years as Head of Medical Services at Worcester Warriors, during this time he was also a Consultant Physiotherapist to England Men’s senior squad. He has also worked as an NHS and private physiotherapist, consulting with athletes in both codes of rugby, football and athletics.