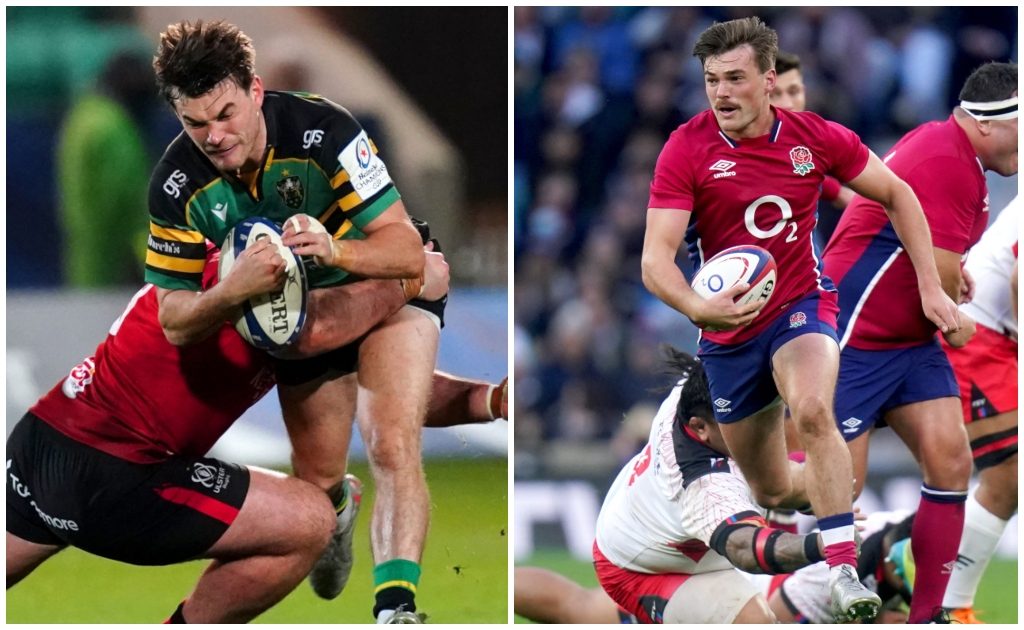 With adaptability becoming something of an Eddie Jones buzzword, Planet Rugby’s James While caught up with England’s George Furbank, a young player that embodies the versatility that Jones seeks but somehow always manages to play with an immense smile on his face.

Spend a minute talking to Furbank and you conclude that here’s a man that’s driven with an immense desire to win silverware, but always seems to remember that rugby is a game of fun.

First capped as a full-back against France in 2020, Furbank’s pace, game management and handling were good enough for him to be selected as a starting fly-half last November versus Tonga, where he produced a first half display that saw his side score five tries before half-time.

Nevertheless, there’s a fine line between being called ‘adaptable’ and being labelled with the dreaded rugby term ‘utility back’, but Furbank is at ease with either, so long as he is simply ‘involved’.

“I certainly don’t see adaptability as losing any form of my rugby identity,” he told Planet Rugby.

“I’m really glad I’m able to offer positional options to the teams I represent, whether that be England or Northampton Saints. Above all, I just want to be involved and, most importantly, part of a team that’s winning trophies.

“Currently I’m enjoying a protracted run at 15 for Saints and I want that to continue. We are at a crucial point in the development of the club, exciting times that are driven by the change of management with Chris Boyd handing over the reins to Phil Dowson and Sam Vesty.

🤤 What a lovely try this is from Saints, finished by George Furbank.pic.twitter.com/mlYL8OwNlE

“The DNA of the Saints you see today has very much been created by firstly Chris and his coaches and then by with a group of youngsters all of the same age who have become incredibly close on and off the pitch. The core of that culture is that we all get on famously and we all enjoy playing attacking rugby.

“With Chris about to move on, we’re under no misapprehension that the responsibility sits upon us to own the legacy that he has left and to celebrate his contribution to Saints by maintaining the style of rugby that we all enjoy and that we and the other coaches have created under his leadership.”

The change that Furbank alludes to at Saints is also something that’s very prevalent within the England set up, as Jones has refreshed his squad over the past six months to fine tune it in preparation for the 2023 Rugby World Cup.

Furbank insists that there’s a lot of similarities to Saints with the changes England are making and believes that the coaches are creating an environment that allows both self-expression and an element of fun.

“There’s been a real change up in terms of focus within England. The last three or four camps I’ve been involved with has seen the dynamics change a little, with empowerment of rugby decision-making at the heart of how we’re being coached, over and above prescriptive coaching,” he said.

“We’re having a lot of fun together as a team, but that ‘fun’ is because we are being really pushed by Eddie and the staff – made to work super hard in training and to push ourselves into uncomfortable environments and tasks that we know are relevant to our matchday.

“When you are pushed together like that as a group, the friendships become even stronger, the team becomes unified because you’re experiencing and responding to those challenges together and you’re sharing formative experiences that might hurt or tire at the time, but that you look back upon with pride.

“That training mindset has also been to allow us more freedom on the pitch to make decisions. Coaches are very keen to give us positional and tactical ownership of our shirt and to take the responsibility of delivering our plan the way we see it in real time during the game.

Furbank added: “We want to relish our roles in the battles we have and to create real memories by owning and responding to the responsibilities we’re given. Players like Marcus Smith have come into the squad and really adapted well to these types of challenges. He’s an incredibly gifted player but most of all, he’s a great guy that you want to be around, one that always wants to get better.

“As a simple example, as the smallest guy in the team, his tackle completion is outrageous and he’s prepared to work and get bruised to become better in an aspect of his role that might just prove crucial in the final moments of a Test. He absolutely goes out of his way to learn and be better, and that’s exactly the ethos that’s running through the entire squad at the moment.”

Looking forward to the Six Nations, Furbank is pragmatic about his personal work-ons, but is ambitious in his measurement for overall success. To his absolute credit, his framing of every answer seems always to revert back, not to himself, but to the context of the team and his mates, and his ambitions follow exactly the same pattern.

“Look, it’s essential to have fun, but the thing that create the best memories and gives the greatest unity is winning silverware and that cannot be underestimated. For Saints, that’s a goal of a top-four finish – staying in the running until the knockout stages where anyone can win on the day,” he said.

“On a personal level, I’d like to perhaps get greater consistency into my game and further establish myself as one of those ‘glue’ players that is so important to a team. With England, it’s a competitive environment, but getting more games and seizing the opportunity you get is the only way to progress.”

There’s no doubt that Furbank is a grounded and selfless individual, one that values others around him and their contributions with the humility and gratitude of a real team man. As both Northampton and England move forward during 2022, the opportunities that he seeks are surely there and it’s to his credit that the end goal for every one of those chances isn’t about him, it’s about his mates. Let’s hope he succeeds – he fully deserves to.

We thank George for his time.