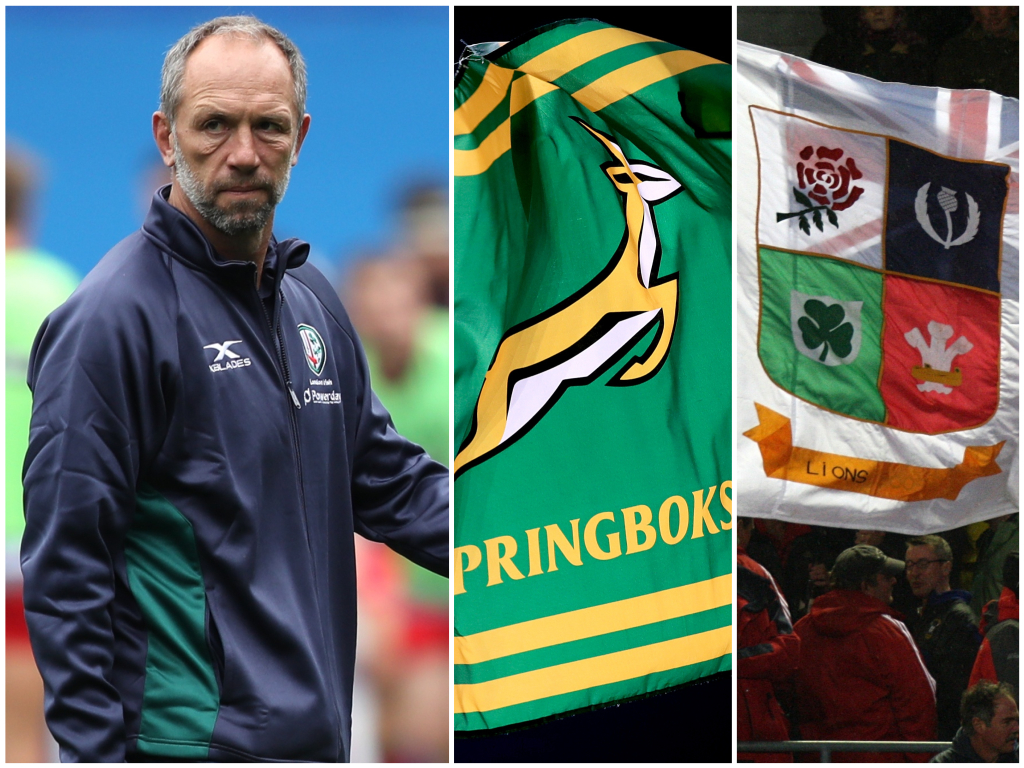 With the first Test between the British & Irish Lions and South Africa exactly one year away today, Planet Rugby caught up with Brendan Venter regarding the upcoming series.

With plenty of experience as a player and coach in South Africa and England, the 1995 Rugby World Cup winner has extensive knowledge of the game. Venter, who is a practising doctor, has had successful coaching stints at Saracens and the Durban-based Sharks and was also part of the backroom staff for South Africa’s and Italy’s national teams in recent years.

His success in the northern and southern hemisphere means he has experienced the best of both worlds and he was very forthright in giving his views on the highly anticipated tour.

Lions will be up for the challenge

For the third successive time in the professional era, the Lions come to South Africa with the Springboks holding the title as world champions and like the two previous tours, in 1997 and 2009, Venter expects the famous touring team to give a good account of themselves.

When asked what he expects from the Lions and if they have the ability to not just beat the Springboks but win the series, Venter said: “The question is probably answered in the Lions tours which came before this one. The Lions are a very strong unit. They have always been. The moment you put all those unions together, you just get a very good rugby side. The best of the best and they have a great tradition.

“For them, knowing that the Springboks are currently the world champions is what’s going to motivate them even more. They are a good team, have a lot of firepower, with good rugby players, and it will be a very tough series.”

🗣️ "An enormous amount of planning, especially from a logistical perspective, goes into putting on a Lions series, so it was crucial that a decision was agreed upon in good time." #LionsRugby

Venter believes Lions head coach Warren Gatland will use several of his former Wales players when selecting his squad but expects a group of England stalwarts to be at the core of the famous touring team’s onslaught.

“With Warren Gatland being their coach there will be a strong Welsh flavour but the reality is that the England players, the likes of Owen Farrell, Maro Itoje, Billy Vunipola, are going to be central to the Lions drive,” he added. “Those players are real superstars in world rugby at the moment and there will also be a good mix of Welsh and Irish players.”

With England currently third in the World Rugby rankings – behind South Africa and New Zealand – and sitting atop the suspended Six Nations table, Venter expects them to provide a large number of players to the Lions’ ranks and feels that Farrell has all the attributes to captain the tourists in South Africa.

“There will be one group from the four home unions that will have more of the candidates (in the Lions squad) and let’s say it’s England, it does make sense to take their leader and make him lead them,” explained the 50-year-old. “Owen has been so successful – for Saracens and England – and he did well in New Zealand as well with the British and Irish Lions (in 2017). Also, because he is so experienced, I think someone like Owen would be a good choice in the end but, if Warren Gatland decides to go with a majority of players from Wales, it could be someone else as captain.

“Getting that blend right – between the various countries – is going to be important to make it work. But one of the things, from what I’ve heard, of British and Irish Lions teams, is that all of those rivalries are usually put aside and the guys really gel and get on very well on these tours. They become good friends as they know each other from playing against each other and finding the right blend might not be that relevant.

“That’s what makes the Lions so brilliant. England, Scotland, Wales and Ireland come together, become one and become very strong.”

England and Saracens second-rower Maro Itoje is another player whose name has popped up as a possible Lions skipper. The four previous Lions tours to South Africa have all been captained by locks with Willie John McBride (1974), Bill Beaumont (1980), Martin Johnson (1997) and Paul O’Connell (2009) leading the side in Test series against the Springboks and Gatland said last month Itoje is capable of doing the same.

Venter disagrees, although he believes Itoje will still be an important player for the Lions.

“For me, it’s totally irrelevant whether you’re a lock or not,” he commented. “Personally, I don’t think Maro is ready to be that leader yet. I think he has immense potential, he’s a good man. He has good values but I think it will be difficult for him, and Maro’s way is contributing to a team in so many other ways. If you take a young man and expect him to be a leader of the British and Irish Lions, I’m not sure if that makes sense.

🗣️ "He would definitely be in contention as one of the possibilities."

More of the same from the Boks

Although Jacques Nienaber has been appointed as the Boks’ new head coach, Venter believes SA Rugby’s director of rugby, Rassie Erasmus, will still be in charge of the team and call the shots behind the scenes for the world champions.

“I can’t see Rassie leaving the team just like that and remember Jacques has never been a head coach before. Rassie is very committed to the country and wants the Springboks to win. I think it’s really straightforward. Jacques will be, the word is in rugby terms, the head coach but Rassie is the director of rugby which is still the boss. Which is good for our country.”

“The Springboks prepared extremely well under Rassie for last year’s World Cup,” he said. “They made a commitment and they stuck together for almost three months. You work with a group, you coach that group, you live together for that three months and you prepare unbelievably well together.”

He said, however, that there is an obstacle in South Africa’s way ahead of the series.

“The biggest problem for them is that a lot of the South Africans are playing outside the country,” added Venter. “That luxury of preparing incredibly well for the Lions is going to be lost and for me that’s going to be their biggest issue.

South Africa relied on a nucleus of players to help them win the World Cup and Venter thinks the Boks will use most of that same personnel against the Lions.

“Rassie is clever enough to know that continuity is everything now,” he said. “He’s going to try and keep the team together for as long as possible. I don’t think there’s time for someone to make a great impression and force their way into the squad from the outside. Rassie will back that team that won us the World Cup.”

⏱️ Five minutes to write down their full names. Easy?

A blessing in disguise

With Saracens set to be relegated to the Championship for breaching the Premiership’s salary cap regulations, Venter doesn’t expect the club’s England contingent to be playing regularly in their new surroundings and said that could work to the Lions’ advantage.

“I think the (senior) Saracens players are blessed because they are actually going to be in a better position,” he remarked. “They will be very well rested and are obviously not going to play week in and week out in the Championship. They might play a couple of games just to prepare themselves to be match ready and sharp but I think it’s going to benefit them.

“The likes of Elliot Daly, Owen, Mako (Vunipola), Maro and Billy (Vunipola). There’s so many of them that are going to be stars within the Lions set-up that I just think if I was a player and I was going to take one season to take it easier, this would be the season.

“They have been overplayed in the past but because of Covid-19 things have changed slightly. However, they will be match ready and fighting fit for the Lions tour.”

The coach and Lions concept

Gatland is coaching the Lions for a third successive tour but has been struggling in his current role as the head coach of the Chiefs, who have lost all five of their Super Rugby Aotearoa matches so far.

Despite that poor record, Venter expects Gatland to do well with the Lions. He feels, however, that having Super Rugby curtailed, due to Covid-19, was a blow for the former Wales coach’s Lions preparations.

“Warren Gatland is experienced and a very good coach and, although his Chiefs team is struggling, it won’t make a difference to his Lions preparations,” he said.

“However, as the coach of the Chiefs, not facing the South Africans – due to the premature end of Super Rugby because of Covid-19 – is a setback. I think it was seen as a big advantage if he is the Chiefs coach and his side plays against all the Springbok players. But nowadays with analysis it won’t really make a difference and he’s an experienced coach, who has been successful with Wales and the Lions.”

Venter also believes the decision to keep Gatland as a coach was a masterstroke from the Lions as he is familiar with most of their players after also leading them on the 2013 tour to Australia and the 2017 trip to New Zealand.

“Gatland has worked with a lot of these players before and it was a clever move to give him another Lions tour,” he said. “They will be as settled as Rassie and the Springboks would want to be, as Gatland was the coach (in 2017) with all of these players.”

A Lions series is one of the unique experiences in the game and Venter revealed that he is an unabashed fan of the concept and thinks it’s great to still have it in the modern game.

“It’s amazing! It’s just so exciting. We remember all the previous Lions series, whether it was to our country, Australia or New Zealand,” he added.

“That’s what scarcity brings. If things are not overdone you get such exciting stuff. And I think the Lions will be very strong and with the Springboks also being a strong outfit, it’s a good series to look forward to.”

We thank Brendan for his time and look forward to a thrilling series between two top class teams.