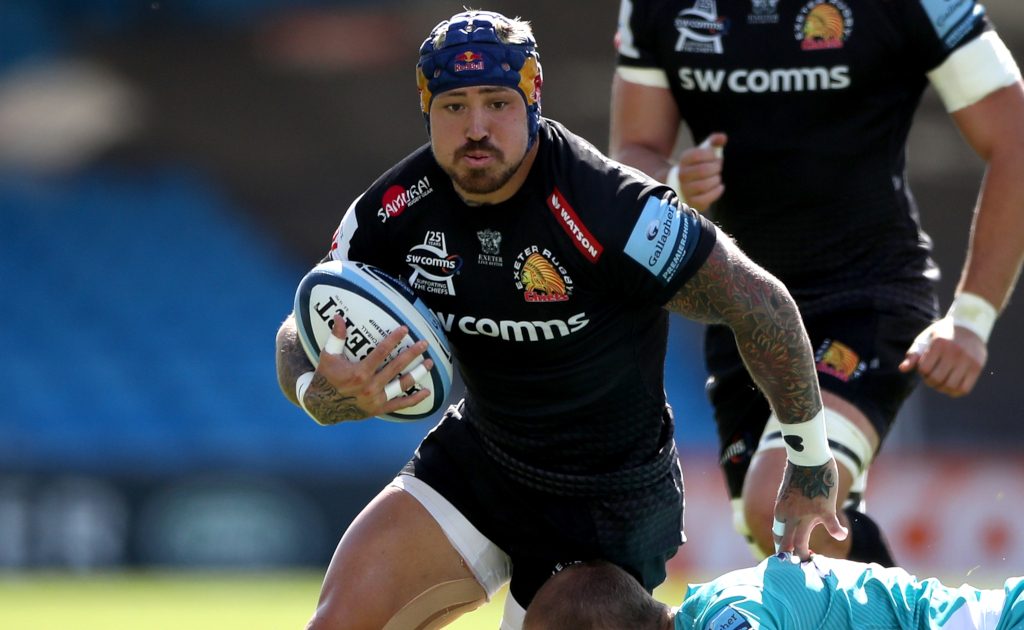 The Premiership continues on Saturday and Sunday as five matches take place, including the clash between last season’s finalists Exeter Chiefs and Wasps.

Jack Nowell returns from injury and is set to play his first game since the 2020 Premiership final, which was coincidently against Wasps, on Saturday.

Nowell will start the game on the bench, but is likely to be given some involvement as the Chiefs. Other changes in personnel from last week see Alec Hepburn and Harry Williams return to the front-row, where they will prop up hooker Luke Cowan-Dickie, who is set to make his 100th Premiership appearance.

Behind them, Sam Skinner comes into the second-row for Jonny Gray, while the sole change to the Exeter back division comes on the winger where Facundo Cordero starts ahead of Olly Woodburn.

Meanwhile, Wasps have made three changes to the starting line-up from the Champions Cup tie with Clermont last time out.

In the pack, Tom West returns at loosehead prop and Ben Morris replaces James Gaskell, who is out with a calf injury, at blindside flanker.

The only alteration in the backline sees Matteo Minozzi out with an eye injury and Rob Miller come in at full-back.

Dan Robson will make his 100th Premiership appearance for Wasps on Saturday.

There is also a welcome return for Alfie Barbeary, who is named amongst the replacements. He is joined on the bench by the returning Levi Douglas and Lima Sopoaga.

Form: Exeter Chiefs’ three-game winning run in Premiership Rugby ended with their 18-34 defeat at Gloucester in Round 15. The Chiefs’ two defeats at home in the competition this season were to Bristol in Round 6 and Northampton in Round 10. Wasps have won just once in the last six rounds of the Premiership: 20-18 at Newcastle on 19 March. The West Midlanders have won five of their last seven away games in all competitions. Wasps beat Exeter 34-5 at Ricoh Arena on 2 January and have never achieved a season’s Premiership Rugby double over the Devonians. Wasps have won just once before at Sandy Park: 26-19 in April 2019.

Sale Sharks have named their side as they return to Premiership action at the AJ Bell Stadium.

Director of rugby Alex Sanderson makes six changes to his starting line-up ahead of the Sharks’ clash with Gloucester, as Arron Reed, Luke James and JP du Preez all return.

Sale sit third in the league as they look to continue their impressive domestic form at home following their European heartbreak last weekend.

Ross Harrison, who celebrated his 250th Sharks appearance last weekend in La Rochelle, returns to the Sale starting line-up for the first time since Round 13 and is joined by Springboks Akker van der Merwe and Coenie Oosthuizen in an experienced front-row.

An all-South African combination of Cobus Wiese and Jean-Pierre du Preez line up in the second-row for this weekend’s clash, with towering lock Du Preez the third and final change in the Sale forwards. Sanderson names an unchanged back-row of twins Jean-Luc and Daniel du Preez and the effervescent Tom Curry.

Sam James and powerhouse Rohan Janse van Rensburg join forces in the centres and the pair have an exciting back three at their disposal as academy graduates Arron Reed and Luke James line up alongside Marland Yarde.

Curtis Langdon, Valery Morozov and James Harper are the front-row replacements with James Phillips and Cameron Neild providing further cover for the forwards.

A highly experienced trio of Will Cliff, AJ MacGinty and Simon Hammersley cover the Sharks back division on Saturday.

For Gloucester, there are four changes to the starting XV that hosted La Rochelle last time out in the European Champions Cup with Jack Singleton, Alex Craig, Jack Clement and Charlie Chapman all coming in to the starting line-up.

Santiago Carreras, Louis Rees-Zammit and Jonny May start in the back three with the centre combination of Chris Harris and Mark Atkinson in action again.

There is an academy feel at half-back with graduate Charlie Chapman starting at scrum-half alongside George Barton who keeps his shirt at fly-half.

In the forwards, Jack Singleton is joined by Val Rapava-Ruskin and Fraser Balmain in the front-row with Ed Slater linking up with Alex Craig behind them at lock.

Jack Clement starts at blindside flanker with Ruan Ackermann at number eight and captain Lewis Ludlow starting on the openside.

Form: Sale Sharks’ solitary defeat in the last five rounds of Premiership Rugby was 14-17 at Northampton on 13 March. The Sharks have won their last three home games at AJ Bell Stadium, their best run at the venue for twelve months. Gloucester Rugby’s two-game losing run in the Premiership ended with their 34-18 eclipsing of champions Exeter Chiefs at Kingsholm in Round 15. Gloucester have won just once away from home in any competition since August and that was by a single point at Wasps on 6 March. The Sharks have lost just once to Gloucester in their last five meetings: 16-18 at AJ Bell Stadium in October 2019.

Harlequins have named a much-changed team as they welcome Worcester Warriors to the Stoop for the return of Premiership action.

There are 13 changes in the starting XV, with back-row Tom Lawday and outside back Tyrone Green the only players retaining starting roles from the club’s Challenge Cup defeat against Ulster.

Back-row Alex Dombrandt returns to captain the side from number eight as Lawday shifts to blindside flanker, while an all-international front-row of Joe Marler, Scott Baldwin and Wilco Louw all return up front.

Danny Care and Marcus Smith are restored in the scrum-half department, fresh off the back of Premiership Player of the Month awards for March and February respectively.

Meanwhile, Worcester Warriors wing Alex Hearle will make his first Premiership appearance of the season in this encounter.

Hearle, who recently signed a contract extension, will start in the absence of the suspended Chris Ashton and the injured Tom Howe who took a bang to the hip during last week’s training match against Bristol Bears.

It will be Hearle’s first start since the Challenge Cup match against Pau in December and his first appearance in the Premiership since August.

Jamie Shillcock will start at full-back and South Africa international Francois Venter will partner Ollie Lawrence in the centre in the other changes to the back division that faced Northampton Saints in Warriors’ last competitive match three weeks ago.

In the pack, Graham Kitchener returns to make his 99th appearance for the club and to form a new second-row pairing with Joe Batley. The latter started at number eight against Northampton before switching to the second-row. His place in the middle of the back-row is taken by the experienced GJ van Velze.

Tighthead prop Richard Palframan and lock Anton Bresler have recovered from injuries and have been named among the replacements along with wing/full-back Harri Doel who is set to make his Premiership debut.

Doel,20, has been signed on loan from Scarlets having also represented Wales Under-20s and played for Llandovery and Swansea University.

Form: Harlequins’ last seven matches in Premiership Rugby have all been won by the home side on the day whilst their most recent reversal at the Stoop in the competition was when Bristol Bears were the visitors on 26 December. Worcester Warriors have won three Premiership matches this season, 11-10 over London Irish in Round 1 and two declared wins against Harlequins and Newcastle. The Warriors’ most recent success on the road was beating London Irish at the Stoop in September. The two clubs should have met on New Year’s Day, but the match was cancelled due to Covid-19 with Worcester declared the victors. The Warriors have lost just once to Harlequins in Premiership Rugby since 2017: 33-47 at the Stoop in February 2019.

Flood comes in at fly-half as one of only two changes from the side which started at Leicester Tigers last weekend – Matias Orlando’s absence in the centres seeing George Wacokecoke push infield, with Cooper Vuna coming onto the right wing.

On the bench there is a first league outing of the season for fit-again tighthead Rodney Ah You, while Italian lock Marco Fuser returns from injury.

Meanwhile, Max Malins returns to the Bristol starting line-up for the first time in 2021 when the Bears return to Premiership action this weekend.

The England international is one of nine changes from the side that suffered defeat in Europe in the club’s last outing.

Siale Piutau co-captains the side from the midfield for his first appearance since February, while Niyi Adeolokun and Piers O’Conor are also recalled for the Newcastle Falcons clash.

In the pack, Will Capon and John Afoa earn starts, while Fitz Harding and Ben Earl come into the back-row. Jake Heenan co-captains the side from number eight.

Ioan Lloyd is back to full fitness and listed among the replacements as Bristol head to Kingston Park in search of a sixth successive league victory.

Form: Newcastle Falcons have slipped to four straight defeats in Premiership Rugby since beating Harlequins 25-22 at Kingston Park on 27 February. That victory over the Londoners is the Tynesiders’ only win at Kingston Park since January. Bristol Bears are unbeaten in their last seven Premiership fixtures and have won their last five in a row since the draw at London Irish in Round 10. Should they avoid defeat this weekend they will set a new Bristol Premiership record for consecutive unbeaten matches in the competition. The Bears have won their last three fixtures against the Falcons since Newcastle’s 39-27 win at Ashton Gate in May 2017.

Stuart Hooper has made three changes for Bath’s Premiership match against Leicester Tigers on Sunday.

Josh Matavesi is back in the side at fly-half following a spell on the sidelines with injury and is joined in the backline by wing Will Muir who has scored three tries in his last two league games.

After missing the Challenge Cup quarter-final win over London Irish, Sam Underhill returns to the back row alongside Taulupe Faletau and Zach Mercer.

The front-row of Beno Obano, Jack Walker and Will Stuart is consistent as is the second-row pairing of Josh McNally and captain Charlie Ewels.

With Matavesi’s inclusion, Senior Academy fly-half Orlando Bailey is the only new addition to the bench.

Meanwhile, Tom Youngs captains the Leicester side alongside Ellis Genge and Dan Cole in the front-row, with Tigers Academy graduates Harry Wells and Calum Green included as the Leicester locks.

Ben Youngs, in just his second Premiership appearance of the season, is named alongside George Ford as the Tigers half-backs, with Dan Kelly partnering Matías Moroni in the Leicester midfield.

Borthwick has named an unchanged back three from last weekend’s European outing for the trip to The Rec with Freddie Steward at full-back, and Kini Murimurivalu and Harry Potter as the wings.

Charlie Clare, Luan de Bruin, Joe Heyes, Tomás Lavanini and Luke Wallace are the forwards replacements and Richard Wigglesworth, Johnny McPhillips and Matt Scott are the backs on the bench.

Form: Bath have been defeated just twice in their last nine first-team matches, both in Premiership Rugby, at home to Exeter in Round 12 and away at London Irish in Round 15. Bath have won three of their last four home games in all competitions. Leicester Tigers’ only defeat in their last six first XV fixtures was 31-47 at Exeter in Round 14 of the Premiership. The Tigers have won three times on the road this season, at Bayonne in the European Challenge Cup, a declared win over Northampton in January and 20-14 at Gloucester in March. Leicester beat Bath 36-31 at Welford Road on 3 January and have not achieved a Premiership Rugby season double over them since 2010/11. The Tigers have not been victorious at the Recreation Ground in the Premiership for over a decade, the last success there being 37-6 in March 2011.