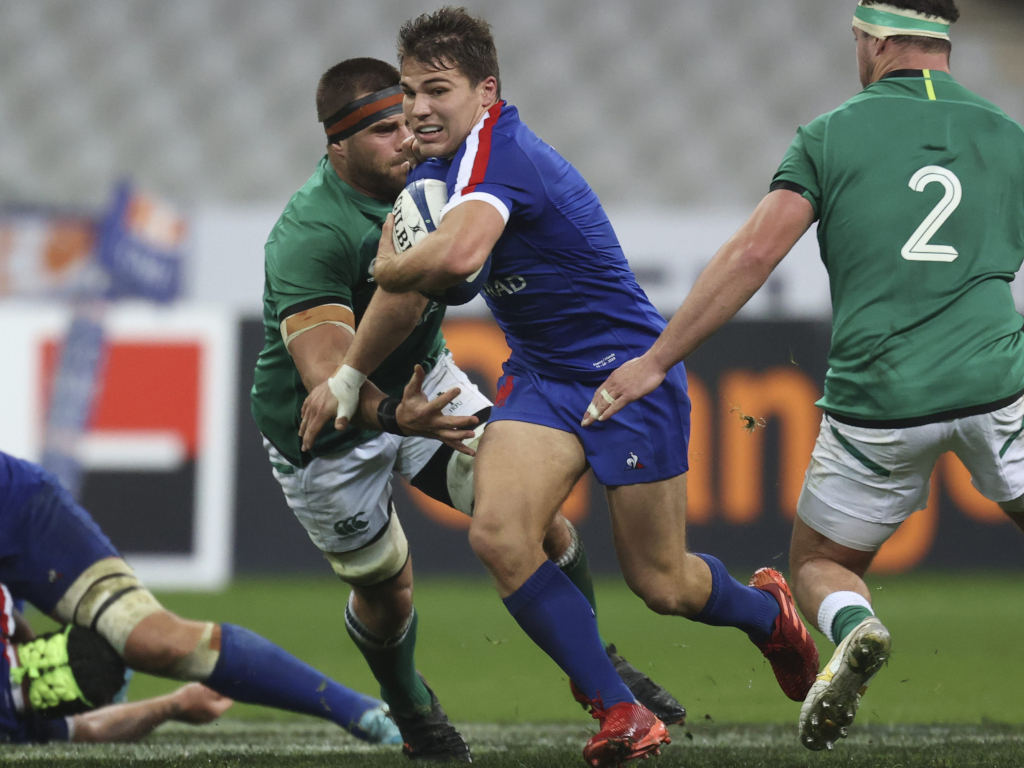 England are the 2020 Six Nations champions after both France and Ireland failed to get the required result in Paris to usurp the Red Rose at the top of the table.

Dupont and Ntamack’s finishes were adorned by a penalty try and Virimi Vakatawa’s score as France crushed Ireland’s slender hopes of a fourth Six Nations title in seven years.

The visibly frustrated Ireland captain Sexton was left shaking his head on being replaced by Ross Byrne in the final quarter but his tactical removal merely underscored France’s superiority.

Cian Healy toasted his 100th cap with a fine try on a punishing night where he also vomited on the Stade de France pitch and passed a head injury assessment.

Robbie Henshaw powered in a stunning solo score and Jacob Stockdale crossed at the death too, but France refused to allow Ireland anything like the control Andy Farrell’s side craved and duly earned a 35-27 triumph.

Ireland spent half the week expecting to require the win and a try bonus-point to claim the title – in the end it was Fabien Galthie’s resurgent Les Bleus who claimed the four tries, and deservedly so.

The rampant France fly-half magicked Vakatawa’s try too, with a sublime chip and chase.

Farrell’s Ireland remain a team in transition, then, with Murray and Sexton unable to hit their previous heights across this admittedly truncated Six Nations.

The fast-approaching Autumn Nations Cup will prove compelling viewing with the Irish at a clear crossroads: stick with the tried, tested and trusted, or twist and build for the future.

The hosts drew first blood, Vincent Rattez keeping the ball in play on the right before Gael Fickou trapped a loose pass with his foot to launch a scything break.

The luckless Andrew Porter was no match for Fickou’s fleet feet out wide, and the France wing fed Dupont to hare home for the try.

Anthony Boutier’s yellow card for a deliberate tap into touch handed Ireland an immediate route back into the clash, however.

Ireland punted the penalty to the corner, only to bungle the lineout – with Sexton knocking on under pressure before copping a knee to the head from Francois Cros.

The visitors put a second penalty into touch for a lineout, and this time Bundee Aki had to rescue a lose throw, claiming smartly at the tail.

Ireland drove Sexton over the line to be held up for a five-metre scrum, and eventually Healy powered over for the try.

Sexton’s conversion had the scores level at seven apiece, then the Ireland fly-half’s penalty had the visitors 10-7 to the good.

Stockdale then knocked on twice in his own 22 in a matter of minutes – evading censure for the first, but not the second.

Caelan Doris was sin-binned for tackling Cros without the ball as the flanker was due to collect and score after Stockdale’s second knock-on – and France were duly awarded a penalty try.

Ireland delivered the ideal start to their 10 minutes with 14 men, however, forcing a penalty in the France 22. Sexton slotted the facile goal to leave France leading 14-13.

Give France an inch, and they'll take a mile… What a score from Antoine Dupont#FRAvIRE #GuinnessSixNations pic.twitter.com/m2B9ao7D9Q

Ntamack converted a goal of his own to leave France 17-13 ahead, with a lead they held to the break.

Restored to their full 15 players, Ireland punted a third penalty of the half to the corner – and were again unable to convert.

France turned the ball over to clear, to take their four-point lead into half-time.

The hosts opened the second-half with a fine try, stunning Ireland with a deadly counter-attack. Bouthier fielded Sexton’s ill-judged high bomb, and launched an eye-catching and successful raid.

Fickou’s chip capitalised on Ireland’s misaligned backfield, Dupont raced onto a helpful bounce – and flipped inside for Ntamack to score in style.

Ntamack missed the conversion, but posted two quick penalties for France to lead 28-13.

Just when Ireland were staring down defeat’s barrel however, Henshaw conjured a try out of nothing. The Leinster centre cut blind after scooping a loose ball, beat the cover and then bashed his way home.

Sexton’s conversion cut France’s lead to 28-20 on the hour – but there was to be no big comeback.

Instead, Ntamack’s cute chip and chase teed up Vakatawa for France – and not Ireland – to seal the bonus-point score.

Stockdale bagged a consolation score with the game’s final play, with Ross Byrne converting, but not even that could deny France the win – and England the title.