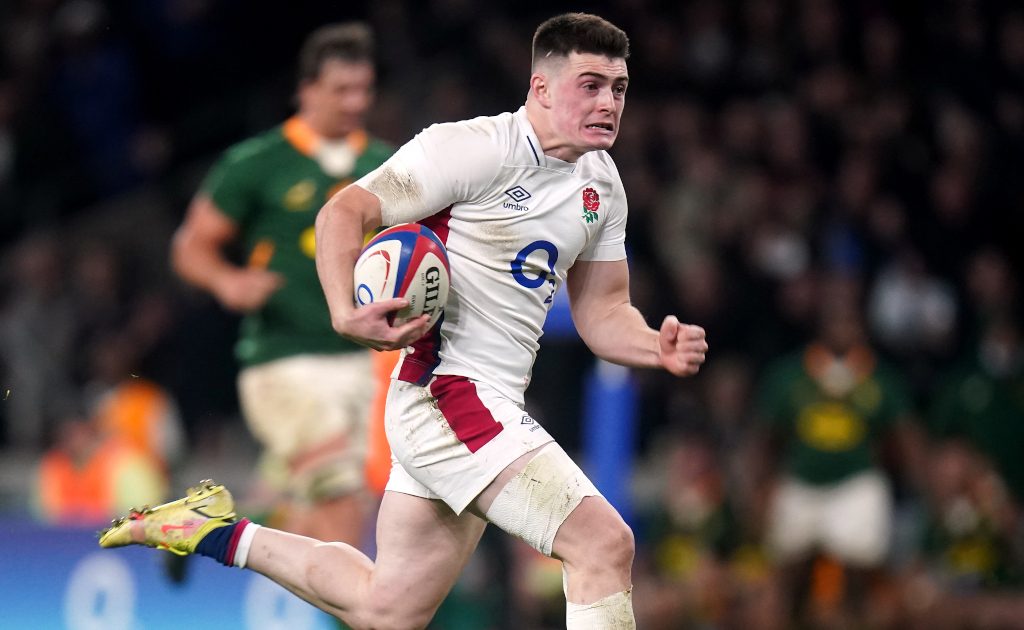 England’s resurgence under Eddie Jones continued after they edged out South Africa 27-26 in a tightly contested Autumn Nations Series Test at Twickenham on Saturday.

Marcus Smith knocked over the crucial points with 90 seconds remaining to prevent the Springboks from completing a comeback win on an afternoon of high drama.

Jones’ charges overcame the early loss of centre Manu Tuilagi, who was injured while claiming the first try, to build a 17-6 lead with Freddie Steward also going over.

South Africa showed resilience in the face of the storm, doggedly defending their line and relying on Handre Pollard’s boot knowing they had won their last three games despite trailing at half-time.

At times England looked willing victims as they gave away penalty after penalty and with their lead eroded by Pollard, they seemed increasingly powerless to stop the momentum shift.

For much of the second half they were entrenched inside their 22, fighting hard for every yard and Pollard eventually kicked the Springboks ahead in the 64th minute.

Defences had reigned but in the space of four minutes they were momentarily shredded as Raffi Quirke and Makazole Mapimpi exchanged slick tries to usher in a nerve shredding final 10 minutes.

Francois Steyn booted a penalty but South Africa saw captain Siya Kolisi sent to the sin-bin for the last five minutes and England pounced through 22-year-old fly-half Smith when the Springboks were penalised for going off their feet.

For all the pre-match focus on the threat coming from the world champions’ set-piece they came off worse at two scrums and then a line-out, providing an early platform for England to attack.

Smith and Henry Slade, who pushed Steward hard for the man of the match award, created the space for Tuilagi to charge into the corner but it was a bitter-sweet moment as the Sale centre was injured and he hobbled off, his afternoon over.

Jonny May invited pressure on to his team by making two glaring mistakes close to his line, but once the danger has been dealt with England used a scrum to launch a fresh attack with Slade floating the ball long to Max Malins.

Using his speed, Malins almost reached the line and once May had carried, Ben Youngs sent Steward over from short range with two tacklers unable to stop his powerful surge.

Three penalties from Pollard kept South Africa in the hunt and they were encouraged by England’s lapses in discipline as the lead deteriorated to just 17-12 as the half-hour mark passed.

But only the hosts posed a threat with the ball in hand as they threatened in the 22 time and again with Slade and Malins influential.

Repeated interventions from referee Andrew Brace sent them scuttling backwards, however, and when Smith shanked a drop-goal another attack had amounted to nothing.

Four minutes into the second half the Bomb Squad came on and for the first time South Africa ignited as Kolisi marauded down the touchline.

The tables were being turned as Pollard missed the posts twice and England conceded scrum penalties, but the Springboks now had the wind between their sails.

Pollard successfully readjusted his sights to slash the deficit to two points and only desperate defending over the line prevented South Africa’s increasingly influential maul from breaching the whitewash.

The Springboks took the lead for the first time through Pollard but England’s midfield conjured a moment of magic when Slade put Joe Marchant through a gap and Quirke was on hand to take the scoring pass.

Will Stuart was sin-binned for going in at the side and South Africa constructed an impressive try finished by Mapimpi.

Steyn was on target to put the tourists back in front but with Kolisi off, England rallied heroically with Smith landing the killer blow.