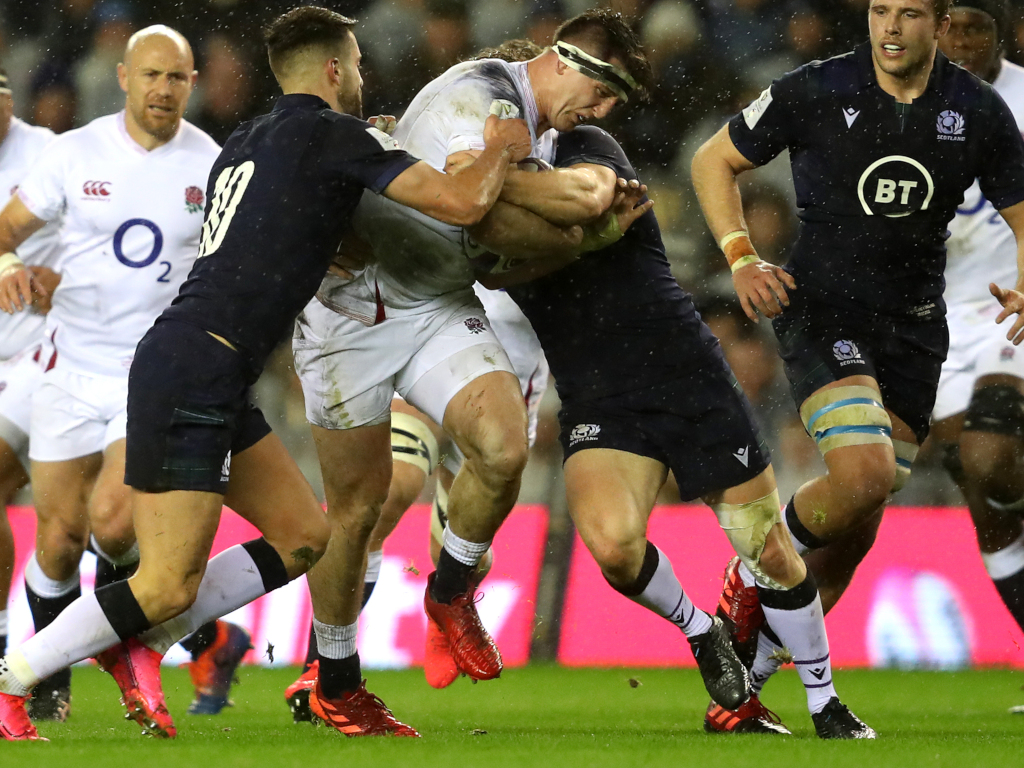 Swirling wind and driving rain turned the Round Two contest into a lottery as points became a precious commodity that were fought over ferociously in a dreadful spectacle beyond the tension created.

Penalties by Owen Farrell and Adam Hastings produced a live score of 3-3 entering the final quarter and it took until the 70th minute for England to engineer the decisive moment and lift the Calcutta Cup for the first time since 2017.

They thought they had scored moments earlier when Farrell appeared to have capitalised on Stuart Hogg’s hesitation under the posts, but the ensuing five-metre scrum began a barrage on the line that ended when Genge powered over.

Scotland started the second-half like a freight train but the collapse of their set-piece stripped away their foundations and England were ruthless in exploiting their weakness.

Victory ended the two-match losing run that was placing pressure on Eddie Jones while the Scots were at least able to secure a bonus point through a late penalty by Hastings.

Apart from an ill-advised up and under into the wind, England’s early kicking was smart with Farrell drilling the ball low to prevent it being blown off course, although the captain was beaten by a gust as he attempted his first penalty.

A second attempt soon after was nailed and when Scotland applied pressure with the help of a George Ford clearance that was swept sideways, they escaped from their 22 as they continued to fall on the right side of referee Pascal Gauzere’s whistle.

Impeccable from Ali Price and Jonny May!

Chances to attack continued to fall the Scots’ way but they yielded the ball repeatedly, albeit against English forwards who were jacking hard with Tom Curry and Sam Underhill producing steals on the ground.

The unpredictable conditions played their part again as a second Farrell penalty was dragged wide and, although Hogg was making huge ground with each clearance, his team persevered in inviting pressure on to themselves despite generally having the wind at their backs.

Hastings kicked the ball straight into touch and Jamie George was wayward with a line-out throw as both sides made errors in filthy weather that destroyed the game as a spectacle.

Pulses finally quickened as the second half got underway with a dummy by Rory Sutherland parting the white shirts and inviting the prop to make a marauding run downfield.

A sustained onslaught advancing towards the line failed to pierce the defence but Scotland were given a penalty for offside that allowed Hastings to kick three priceless points.

Knowing the difficulty of kicking into the wind, Hogg darted his way out of his 22 and when his run was coming to an end he sent the ball into touch to launch another wave of forward-led attacks.

Just as England appeared to have escaped the siege through a scrum penalty and rolling mauling, Ford sent the ball straight into touch once more and then Elliot Daly followed suit.

Scotland’s set-piece had ceased functioning but Farrell, who had Genge holding the ball upright, could not make them pay from a penalty.

The pendulum swung when Hogg lacked conviction as he looked to gather a kick and, although a try was averted, he had conceded a five-metre scrum that allowed Genge to storm over with Farrell converting.

The respective kickers then traded penalties late on as the Red Rose bounced back from last weekend’s defeat with a crucial victory.