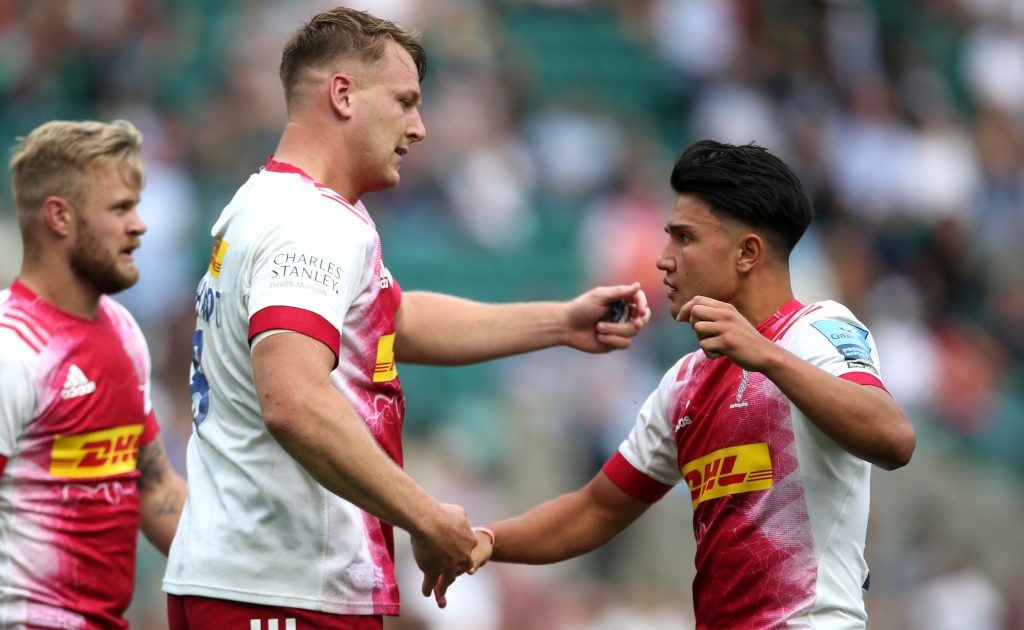 Harlequins stars Marcus Smith and Alex Dombrandt, who put their names in the selection mix for England, were praised by senior coach Tabai Matson.

Both played significant roles as they came from 21-0 down to defeat Bristol Bears 52-24 in a repeat of last season’s Premiership semi-final.

Smith came off the bench for Tommaso Allan to inspire his side, adding a superb individual score late on and dictating play excellently throughout his time on the field.

And every bit as influential was Dombrandt, whose second-half try was the highlight of an all-court display that will have impressed Eddie Jones as the Red Rose boss looks for a replacement for Billy Vunipola at number eight.

“Marcus Smith in this system is exceptional. Any time he gets into his groove he not only creates opportunities but is a real handful for the opposition,” Matson said.

“The try he scored on the chip through shows a world-class skill set. He was a little bit rusty on some of his kicks, but this was his first game back so you expect that.

“I wouldn’t say Alex is unique, but he’s rare as a loose forward. He’s very skilled. His anticipation of where the line breaks are going to be means that he can put the hammer down 10 seconds earlier in his support lines and assists.

“He’s so skilful. He’s playing really well. I thought he played exceptionally well. Defensively he was bloody good and got a couple of key turnovers.”

Quins trailed 24-7 at half-time and the size of their eventual win barely looked possible after being run ragged by the speed and width of Bristol’s early onslaught.

“Clearly the scoreline is a massive surprise… I wasn’t expecting it. But I was expecting us to click a few more times in attack, defend a bit more stoutly and see what happened,” Matson said.

“At half-time, there was a confidence that, if we kept playing, we would take our opportunities. And we did.”

Bristol have lost three of their opening four games, but director of rugby Pat Lam is refusing to panic.

“Rugby is a simple game and it’s about looking at what your roles are,” he said. “It’s a team game. We need 15 guys on the same page, doing their jobs well.

“We take the glory when we win games and we’ll take the hurt when we lose the game.”

Meanwhile, if Sale Sharks and England centre Manu Tuilagi suffers another major injury it could spell the end of the 30-year-old’s rugby career.

That is the word from Sale’s director of rugby, Alex Sanderson, who said the Premiership club will continue with their policy of limiting Tuilagi’s appearances as they try to end his continuing injury woes.

“It’s part of his long-term development,” he said. “Let’s just talk about his history. For seven or eight years, he’s only ever played 12 games in a season.

“I think he knows that if he gets another serious injury, that might be it. That might be his career.”