Home England England kick off with comfortable win over Tonga 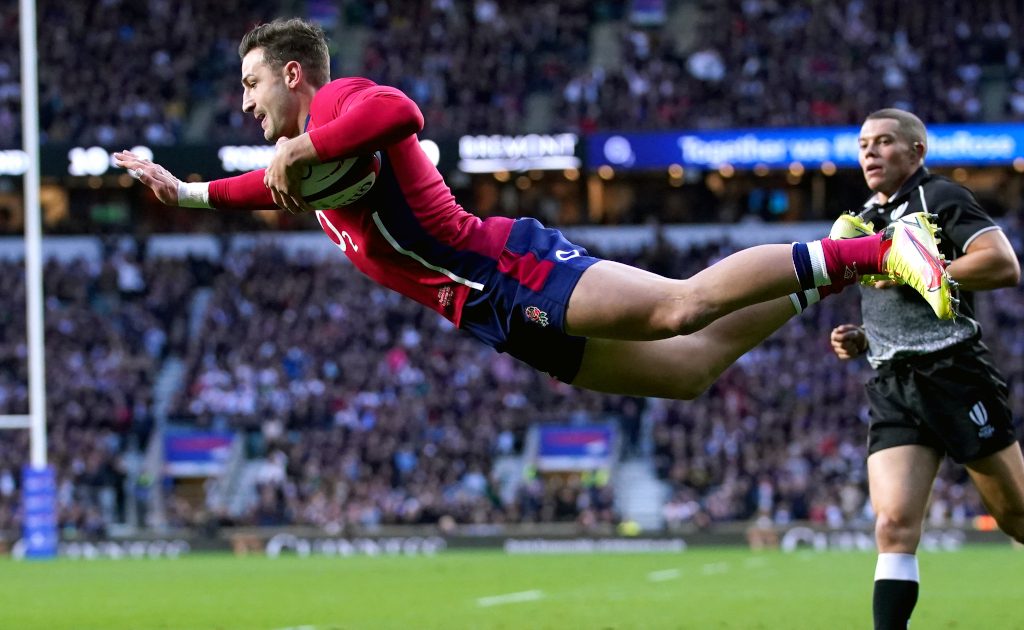 England got their Autumn Nations Series campaign off to a winning start as they thumped a disappointing Tonga 69-3 at Twickenham on Saturday.

The first 82,000 full house at the home of English rugby for 20 months because of the coronavirus pandemic enjoyed an 11-try rout led by Jonny May, Ben Youngs and Jamie George, who each crossed twice.

Victory was completed despite a disrupted build-up that saw Owen Farrell withdraw as fly-half and captain after testing positive for Covid with confirmation of his absence delivered only 90 minutes before kick-off.

George Furbank was promoted to chief conductor for his fifth cap and a rookie who is more accustomed to playing full-back rose to the occasion by showing several attacking flourishes until he was replaced by Marcus Smith.

The intention had been for Farrell and Smith to form a playmaking axis but Covid and Smith’s leg injury sabotaged that plan and instead the Harlequins prodigy had to wait until the 53rd minute to step off the bench.

Smith entered the fray at a time when England were becoming scruffy in the face of successful Tongan spoiling but his arrival gave Eddie Jones’ men a second wind and he picked a brilliant support line to finish a break by man of the match Henry Slade.

The 22-year-old’s afternoon was marred only when he was elbowed on the floor in the 70th minute by Viliami Fine, who was sent off as a result.

Courtney Lawes deputised as captain for the isolating Farrell, who will also miss next Saturday’s visit of Australia, and the veteran flanker was highly influential with his try-saving tackle on Telusa Veainu a remarkable feat of athleticism.

Even allowing for the strength of determined but limited opposition it was an impressive start to the autumn as England, wearing their red change kit, attacked at speed showing an intent that was missing in the Six Nations.

Bigger tests are to come against Australia and South Africa across the next two weekends but this was a meaningful step towards resetting after a calamitous fifth place finish in the Championship.

Kick-off was delayed by 10 minutes after Tonga arrived late and it looked bleak for the Islanders from the moment Adam Radwan showed slick footwork to cross in the third minute.

Tongan resistance then melted away before a driving maul that produced a try for George.

England were sending penalties into touch rather opting for goal and while they met typically ferocious Islanders defence in tight channels, their superior organisation was already evident.

A scrappy phase followed that delivered Tonga’s first points through Sonatane Takulua’s boot but a dummy from Furbank that deceived Sione Vailanu forced the tourists to scramble.

The attack ultimately went nowhere but in the 29th minute England were over again as fast ball, sharp hands and touchline charge from Manu Tuilagi created the opportunity for May to strike.

To make matters worse for Tonga, wing Solomone Kata was sin-binned for taking May out in the air and when a surging Ellis Genge broke the first line of defence Maro Itoje was on hand to finish.

Veainu was denied an intercept try by the athleticism of Lawes, who raced 70 metres to make the tackle and the first half finished when Youngs dummied his way over.

Sam Underhill was replaced at half-time having led with his head in a tackle, ushering in Alex Dombrandt, and Youngs claimed his second try when he ripped the ball from Vailanu at the base of a scrum and sprinted home.

Angling infield off his wing, May grabbed his second as the maul became an increasingly powerful weapon for England with George on the end of one powerful drive.

With Fine seeing red, Smith, Jamie Blamire and Alex Mitchell ran in additional tries late on to power the hosts past the 60-point mark.