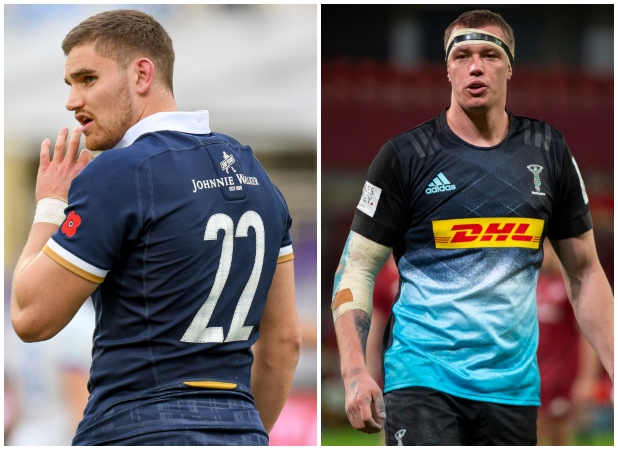 The duo are the first new signings to be announced ahead of the 2021/22 season.

Edinburgh head coach Richard Cockerill said: “It’s great to announce a couple of new faces to show how our plans for the future continue to take shape.

“James and Glen are quality, experienced individuals – one of them an international, the other of international quality. They’ll add a new dynamic to our depth and competition for places in a number of areas.

“James is a player we’ve been interested in for a long time now, so it’s fantastic to secure his signature for the club. He’s a talented, international back who can play in a number of specialist positions and will be a real asset to us.

“We’re equally pleased to sign Glen [Young] – a Borders man who’s spent his senior professional playing career in the English Premiership – and will now get a taste of a new competition, which he’s really excited about.

“He’s another player we’ve known a lot about for a long time. He’s a talented individual and a hard worker – the type who’ll fit in well to our environment.”

Scotland representative Lang, 25, has made 73 appearances for Harlequins to date – scoring 11 tries and 204 points – since joining in 2016.

He earned his Scotland Test debut in the national team’s win over Canada in 2018, also coming off the bench against Argentina in the win later that tour.

Ill-timed injury curtailed his involvement the following year but he marked his return to the international arena in the recent series, where he featured in Scotland’s wins over Georgia, Wales (starting) and Italy (from the bench), remaining unbeaten in navy blue.

He said: “I was really excited when I got the opportunity to speak with Richard Cockerill and had a good chat with him on how he views the club and how he sees me fitting in. After that chat I had pretty much made my mind up.

“I’m also looking forward to be joining the PRO14. Whenever I’ve played European games against the likes of Munster and Ulster, it’s always been a good test.

Getting to know, James Lang 🏴󠁧󠁢󠁳󠁣󠁴󠁿

“Going to those places was always amazing, so the prospect of going there each season and challenging myself against some of the best players is exciting to me, and another reason I jumped at the opportunity.

“I’ve played across the backline at Quins and I want to focus on my centre-play, at 12. My aim is to do that and put my best foot forward for Edinburgh, which will hopefully, in turn, help me pursue more international honours as well.”

Young added: “I’m buzzing to get started with Edinburgh.

“I’ve been in the English Premiership since I was 18 and enjoyed it but am now really looking forward to a new challenge in a new competition.

“Edinburgh is perfect for me. I spoke to Cockers and was encouraged by where he sees me fitting in but also with the areas of my game he can help me improve on.

“I have a young baby with my other half and we’re looking forward to being closer to home so he can grow up close to family and friends.

“It’s exciting. I already know a few of the boys who played Scotland U20 and plenty more from roundabout where I’m from, so it’ll be good to catch up with everyone again.”