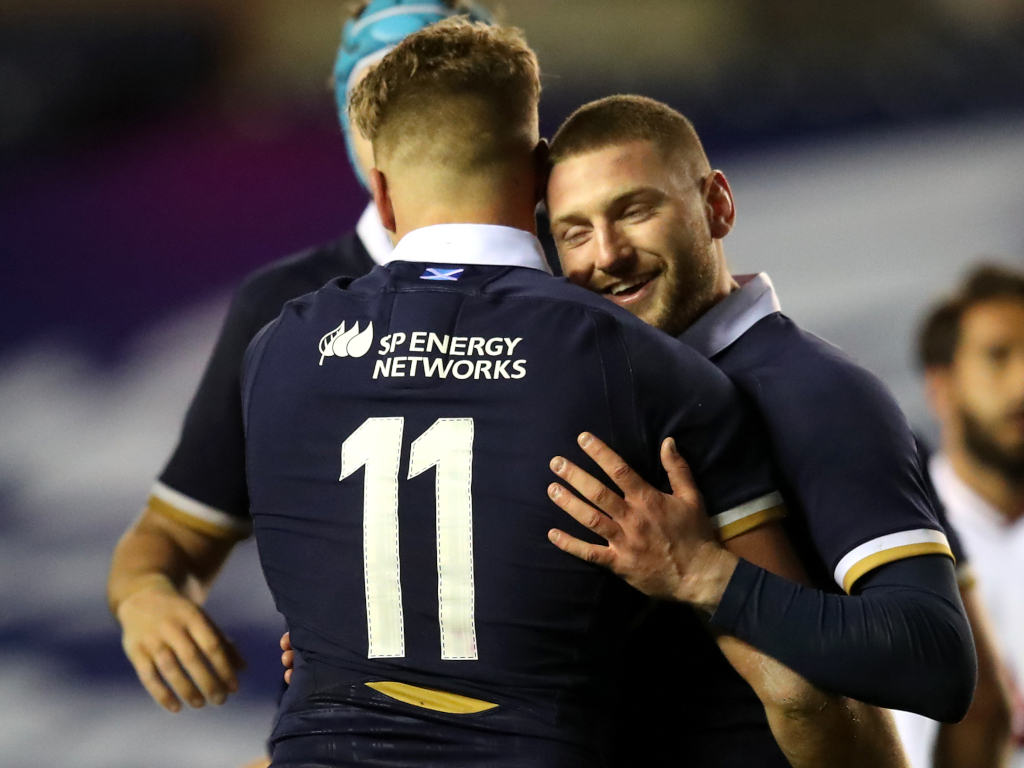 Edinburgh’s Duhan van der Merwe displayed his try-scoring prowess as the wing touched down on his Scotland debut in their dominant 48-7 triumph over Georgia.

With Stuart Hogg aiming to complete a trophy double with new European champions Exeter, Fraser Brown was handed the armband on his 51st international appearance and marked the occasion by crossing twice after lineout mauls.

Georgia could not handle the driving maul and Hamish Watson and Stuart McInally both went over from the same source.

Darcy Graham had opened the scoring early on and the Scotland backs weighed in as the game opened up in the latter stages.

Graham grabbed a late second after his fellow Edinburgh winger, Van der Merwe, grabbed a try before Blair Kinghorn got in on the act.

Van der Merwe’s fellow South African, Oli Kebble, also won his first cap after coming off the bench with Finn Russell, making his 50th Scotland appearance and his first this year after losing his place following a disciplinary issue prior to the Six Nations.

Scotland were on the front foot immediately as they warmed up for next weekend’s Six Nations finale in Wales, and there were little over two minutes gone when Graham produced a dummy after his own tap penalty which made space for him to claim his sixth try on his 11th international outing.

The home side remained on top without making the most of their possession but their forwards ensured Townsend’s team went into half-time with a commanding lead thanks to two tries in five minutes following lineout mauls.

Hooker Brown joined the back of the maul after his own throw and got the final touch as the Georgian pack were driven back in the 26th minute. Rory Sutherland then fed Watson to go over on the left wing.

Scotland were confined to a 17-0 half-time lead after failing to convince French referee Alexandre Ruiz that they had got the crucial touch after forcing the Georgian defence back over their own line again.

Cornell Du Preez, who was on for the injured Matt Fagerson, emerged from a pile of bodies claiming a try but television footage could not clear up who grounded the ball.

Impact from the debutant

Guess who the architect was?

Georgia got off the mark inside five minutes of the restart after quickly turning a scrum from almost 40 metres out into a try. Scrum-half Vasil Lobzhanidze’s pass to Akaki Tabutsadze looked forward but Scott Cummings had got a fingertip to it which ensured the winger’s score counted.

Scotland responded immediately as Brown produced a carbon copy of his first-half try.

Scotland made four changes with Kebble and Russell among those coming on and McInally replacing Brown before emulating his fellow hooker with another try from the lineout maul.

Russell gave Scotland a new edge and the game opened up for Scotland’s backs in the latter stages.

The Racing 92 fly-half fed Van der Merwe with a close-range pass for the wide man to run through a huge gap in the 70th minute, and Graham went over after another lineout five minutes later.

Kinghorn scored in the final moments after following up on his own kick forward.