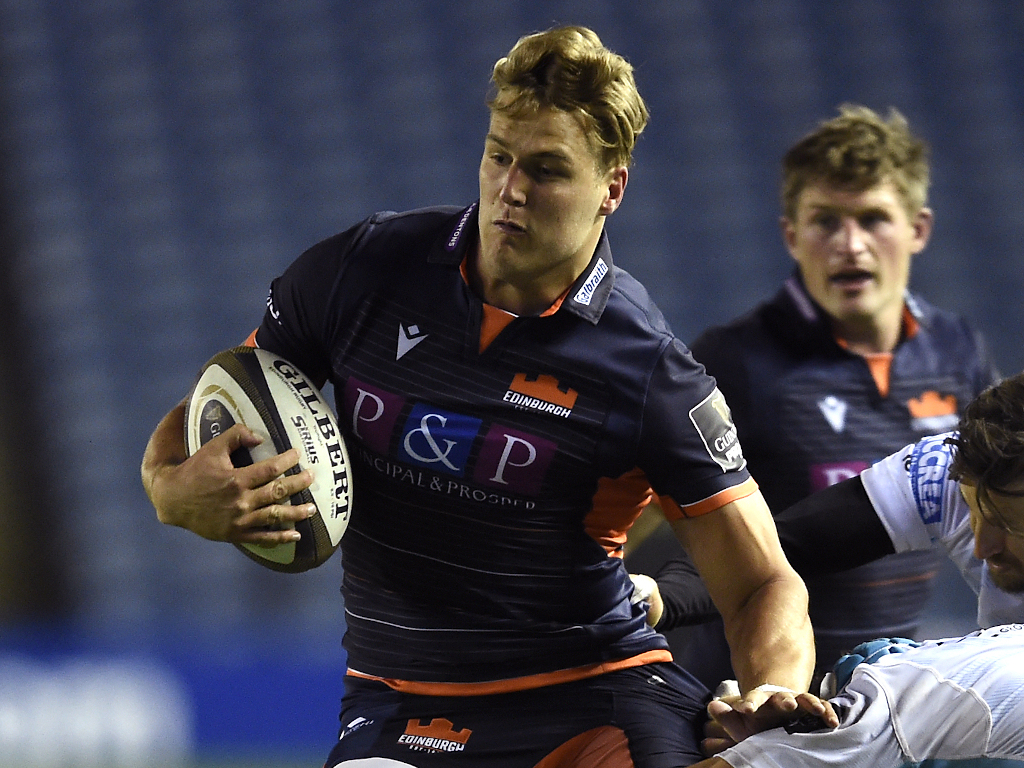 There’s four games taking place on Saturday in the PRO14 before Round Two concludes with Glasgow Warriors against Scarlets on Sunday.

Benetton head coach Kieran Crowley and his coaching staff have retained most of the starting line-up that did well in their away match against Ulster last weekend.

Crowley has only made four changes to his run-on side compared to a week ago. In the backline, the back three will consist of Jayden Hayward at full-back, while the wings will see Ratuva Tavuyara lining up on the right and Monty Ioane on the left.

Marco Zanon will start at inside centre and there is room for Luca Morisi on his outside in the number 13 jersey. The half-back combination consists of Paolo Garbisi, who lines up at fly-half, and captain Dewaldt Duvenage.

The scrum is powered by props Cherif Traore and Tiziano Pasquali, with hooker Hame Faiva packing down alongside them. There is a new second-row featuring Irné Herbst and Eli Snyman, who have recovered from injury.

The pack is strengthened with the same back-row which lined up against Ulster with Sebastian Negri and Braam Steyn the two flankers and Toa Halafihi starts at number eight.

Meanwhile, the Leinster team has been named by head coach Leo Cullen with Garry Ringrose to captain the squad as they play their first game away from Dublin since February’s trip to The Gnoll against the Ospreys.

It’s the same back three that started against Dragons last weekend with Hugo Keenan again selected at full-back, Jordan Larmour on the right wing and James Lowe on the left.

In the centre, Robbie Henshaw makes his first appearance of the new campaign in the number 12 shirt with captain Ringrose outside him.

In the pack, Ed Byrne, James Tracy and Michael Bent will line up in the front-row with Ryan Baird and James Ryan behind them to complete the tight five.

Caelan Doris, Will Connors and Jack Conan are the back-row selected by Cullen for the trip to Treviso.

Ospreys head coach Toby Booth has named an unchanged side to the one that claimed the victory over Edinburgh last weekend in the opening round of the season.

Justin Tipuric will lead the team for the 52nd time for this game against Ulster and will move up to second place on the most appearances made as skipper.

Olly Cracknell and young Morgan Morris join Tipuric in the back-row with Adam Beard and Alun Wyn Jones in the second-row while Nicky Smith, Sam Parry and Tom Botha pack down in the front-row.

Dewi Lake, Rhodri Jones and Ma’afu Fia provide the cover up front while Bradley Davies and Dan Lydiate complete the forward contingent off the bench.

In the backline, Dan Evans is named at full-back alongside Luke Morgan and last weekend’s double try-scorer Mat Protheroe.

Owen Watkin and Keiran Williams retain the centre partnership with Stephen Myler and Rhys Webb as the half-backs.

Josh Thomas and Tiaan Thomas-Wheeler are named on the bench with Harri Morgan coming into the 23 as the only change from Round One.

Meanwhile, Marcus Rea will make his first start for Ulster on Saturday as the team heads to Wales.

The 23-year-old – who was Player of the Match in his sole previous Ulster appearance as a replacement against Leinster in April 2019 – has been named at openside flanker. Marcus’s older brother Matty – Player of the Match in last weekend’s bonus-point win over Benetton – is named alongside him at blindside, with Marcell Coetzee once again packing down at number eight.

Jack McGrath, Rob Herring and Marty Moore have been given the front-row starting berths, and Alan O’Connor has been selected along with captain Iain Henderson in the second-row.

Matt Faddes returns to the starting side on the right wing and will join Jacob Stockdale at full-back and Rob Lyttle on the left wing. Last week’s midfield duo of Stewart Moore and James Hume has been retained. Ian Madigan comes in to start at fly-half, pairing with John Cooney at scrum-half.

Here are the 23 that travel to face @Munsterrugby tomorrow night! Brought to you by @Dentons.#GuinnessPRO14 | #MUNvEDI

Munster have made seven changes to the side that defeated Scarlets in the thrilling opening round encounter in Wales as they prepare to face Edinburgh.

Last week’s match-winner, Academy fly-half Ben Healy, starts at 10 this weekend as he joins Craig Casey in the half-backs.

There is a new midfield pairing with Alex McHenry, making his first PRO14 start, named alongside Rory Scannell.

In the back three Matt Gallagher makes his Munster debut on the left-wing joining Andrew Conway and Mike Haley.

Jeremy Loughman comes into the front-row to pack down with Rhys Marshall and John Ryan while Fineen Wycherley joins Tadhg Beirne in the engine room.

The back-row change sees Tommy O’Donnell included with Jack O’Donoghue making the move to blindside, and CJ Stander captains the side from number eight.

In the replacements Roman Salanoa and academy fly-half Jack Crowley are in line to make their Munster debuts, while Conor Murray and Dan Goggin return from respective thigh and ankle injuries to be included.

The capital side make seven changes to the side that slipped to defeat in last weekend’s 2020/21 season opener with Scotland prop duo Rory Sutherland and WP Nel both handed starts for the clash.

Hamish Watson and George Taylor – who both featured as substitutes in the defeat to Ospreys – get the nod at openside and inside centre respectively, while Nic Groom returns from injury to start at scrum-half.

Edinburgh remain without the services of internationalists Viliame Mata, Magnus Bradbury, Henry Pyrgos and Blair Kinghorn who all miss out through injury.

The return of Van der Merwe on the wing is the only alteration to an otherwise unchanged back-three as Darcy Graham and Damien Hoyland continue at wing and full-back respectively.

In the front-row, Stuart McInally once again starts at hooker and packs down alongside prop pairing Sutherland and Nel.

Scotland international lock Grant Gilchrist – this week named co-captain of the club alongside McInally – is once again paired with Ben Toolis in the second-row.

🔁 3 changes to the starting XV as @dillon3_ @kirby_myhill and @ollyrobbo are brought into the pack
5️⃣0⃣ The big half century for @CoreyD_96
💙 An unchanged backline! pic.twitter.com/CTLRw5YNrp

The prop, who was one of six Cardiff Blues players selected in the Wales squad earlier this week, came off the bench during the opening day win over Zebre in Parma.

With an unchanged backline heading into the clash at Rodney Parade, a further two changes are made amongst the pack, with Kirby Myhill joining Lewis in the front-row, replacing the injured Liam Belcher in the number two jersey.

Josh Turnbull has been banned for three weeks following his red card against the Italians, with Olly Robinson replacing the utility forward in the back-row.

Prop Corey Domachowski retains the starting spot at loosehead, as he clocks in at half century of appearances for his home region.

Elsewhere in the pack, James Botham switches to number eight, having featured on the openside last week, and Cory Hill continues as captain, linking up with Seb Davies at lock.

With no changes in the backline, last week’s Man of the Match, Jarrod Evans, continues his partnership with Lloyd Williams at half-back.

Willis Halaholo is retained at inside centre, joining Rey Lee-Lo in midfield, after making a long-awaited return from a serious knee injury during last week’s encounter.

In-form wing Josh Adams, who has eight tries in nine appearances for the region, combines with Matthew Morgan and Hallam Amos in the back three, before he departs for international duty.

Two new faces are introduced to the matchday squad and feature on the replacements bench, looking for their first appearances of the 2020/21 season, with Alun Lawrence covering back-row, having penned his first senior deal with the region over the summer.

Kristian Dacey, who is the highest scoring forward in the region’s history, also returns to the fold as an all-international front-row provide cover from the bench.

Meanwhile, Connacht head coach Andy Friend has made two changes to his starting XV for this fixture.

Eoghan Masterson comes in for his 93rd Connacht appearance, starting at blindside flanker. Captain Jarrad Butler moves to number eight as a result while Conor Oliver retains his place on the opposite flank.

The other changes comes in the backs where Sammy Arnold partners Bundee Aki at centre.

The remainder of the team is the same that impressively saw off Glasgow Warriors last week, with hooker Dave Heffernan joined by props Denis Buckley and Finlay Bealham in the front-row, while Gavin Thornbury and Quinn Roux continue their second row partnership.

Kieran Marmion and Jack Carty are retained at nine and 10 respectively, while the squad is completed by the same back three of wingers Alex Wootton and Peter Sullivan alongside full-back John Porch.

Richie Gray will make his 50th appearance in a Glasgow Warriors jersey should he come off the bench against the Scarlets this weekend, after being named amongst the replacements for the club’s first home game of the 2020/21 season.

Danny Wilson has made three changes to his starting XV for Sunday’s fixture, which will be played behind closed doors at Scotstoun.

Zander Fagerson makes his first start of the new campaign after missing last weekend’s trip to Galway, lining up alongside Oli Kebble and co-captain Fraser Brown in the front-row.

The engine room is unchanged from Round One, meaning Rob Harley and Scott Cummings continue their partnership for a third successive match.

Ryan Wilson and Matt Fagerson retain their spots in the back-row, with Tom Gordon coming into the side to start on the openside.

The half-backs comprise of Ali Price and Adam Hastings once more, as the pair look to dictate play under the Scotstoun floodlights.

Fresh from scoring the club’s first try of the 2020/21 season, Nick Grigg continues alongside Stafford McDowall in the centres.

Fellow try-scorers Tommy Seymour and Huw Jones – maker of more metres than any other player in round one – are likewise retained in the starting line-up, as Ratu Tagive is promoted from the bench to start on the wing.

D’arcy Rae rotates to the bench for Sunday’s clash after playing the full 80 minutes last weekend, joining George Turner and Aki Seiuli as the front-row replacements.

Similarly, Chris Fusaro will provide vast experience if called upon from the bench, with Gray completing the contingent of forward cover.

George and Pete Horne once again start in the 21 and 22 jerseys respectively, as Flying Fijian Niko Matawalu comes into the matchday squad for the first time this season.

Meanwhile, Samson Lee will make his 150th Scarlets appearance as he returns to the side to take on the Warriors.

The tighthead prop has been in superb form this season and was this week named as one of 13 Scarlets in Wayne Pivac’s Wales squad for the forthcoming autumn internationals.

Lee missed last weekend’s last-gasp loss to Munster with a head injury, but has been cleared to play at Scotstoun as one of three changes to the starting XV.

The others see Johnny Williams come in for Steff Hughes in midfield and Ryan Elias step in for club captain Ken Owens, who is named among the replacements. Jonathan Davies will captain the side.

Leigh Halfpenny, who kicked a record-breaking nine penalties in the 30-27 loss to Munster, again wears the 15 jersey with Tom Rogers and Steff Evans on the wings.

Williams will link up with Davies for the first time, while Dan Jones and Gareth Davies continue their half-back partnership.

Lee joins Wyn Jones and Elias in an all-international front row; Jake Ball and Sam Lousi are selected at lock, while Blade Thomson, Sione Kalamafoni and Josh Macleod — another of the Scarlets’ Wales call-ups — remain as the back-row trio.