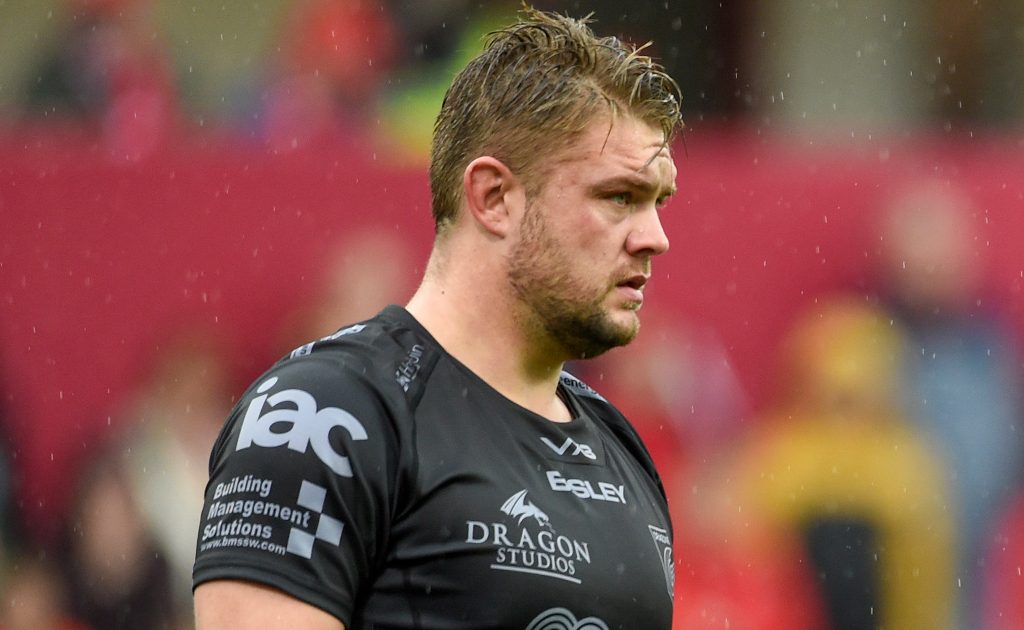 Dragons back-row and record appearance-maker Lewis Evans has announced his decision to retire from professional rugby.

Legendary forward Evans made his senior debut for Dragons in 2006 and has gone on to make 236 appearances in all competitions for the region.

The 33-year-old – affectionately known as Shanksey to his peers and army of fans – has now made the decision to call time on his impressive career at the end of his current contract.

The versatile forward, who could also operate in the second-row, has a firm favourite with the Rodney Parade faithful since his debut 15 years ago.

Dean Ryan, Dragons’ director of rugby, said: “To play for one region as successfully and for as long as Lewis has is an outstanding achievement.

“He has been a key figure throughout his playing career at Dragons and will finish with an impressive from his time at the region.

“We will now support him as he moves into the next stage of his career and he does so with the very best wishes of everyone at Dragons.”

Newport-born Evans began his rugby career by playing throughout the Dragons age-grades and also featured for Ebbw Vale and Newport before stepping up to the professional arena.

Evans has become a key component in the Dragons pack and has also impressed at an international level, representing Wales at all age group levels and Wales Sevens.

The back-row has twice been called up by Wales. On the first occasion, for the tour of North America in the summer of 2009, he was unable to take up his place in the squad as Dragons were involved in a European Cup fourth place play-off. His second call-up came for the Australia game in Cardiff after the 2011 Rugby World Cup.

Hugely respected right across Welsh rugby, Evans was named captain of the region ahead of the 2016/17 season and later that campaign hit a double century of games for Dragons.

Dragons chairman David Buttress said: “Lewis has been an absolutely incredible servant to the Dragons.

“He is a true homegrown success story having come through our Academy before becoming the ultimate professional over 15 seasons.

🔴 Teams losing a player to a red card will be able to use a nominated substitute to replace the offender after a 20-minute period.

“He is totally committed to the Dragons and throughout all the highs and lows has always led from the front with a determination to bring success to his home region.

“Lewis epitomises what it is to be a Dragon and his record number of appearances is one that will undoubtedly stand the test of time and may never be beaten.

“We wish him all the best for the future and will support him in his transition from the professional game.”