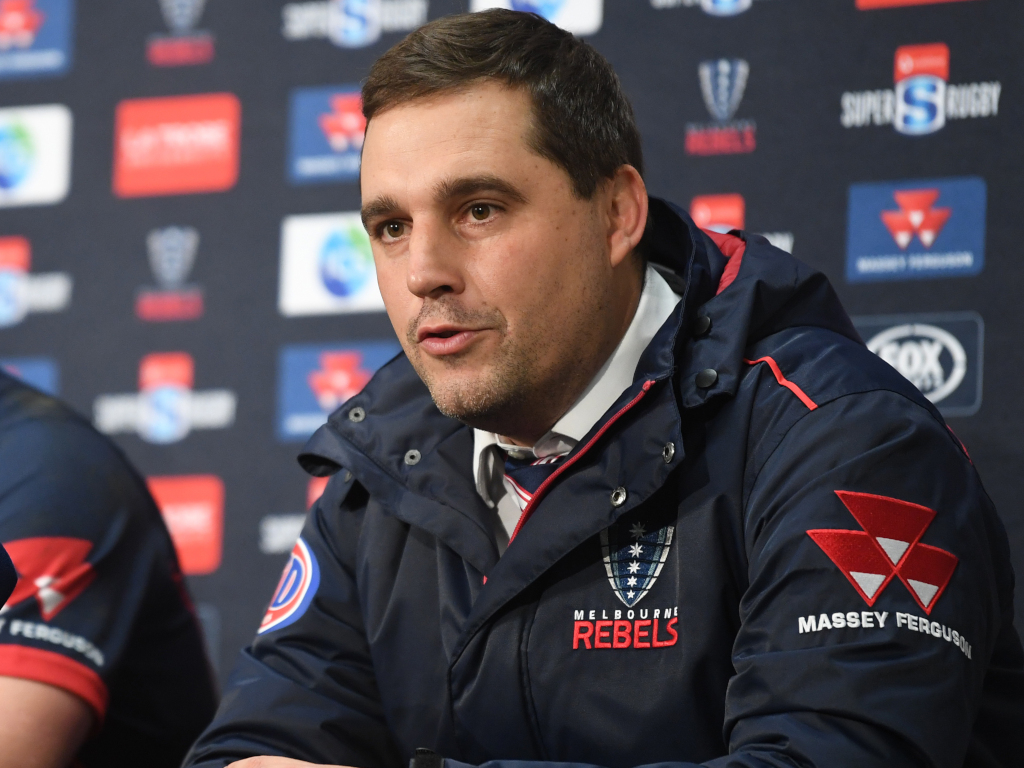 Melbourne Rebels head coach Dave Wessels has informed the club that he will be stepping down from his role.

His decision was shared in a meeting with Rebels chairman Paul Docherty and CEO Baden Stephenson, with Wessels then announcing it to the playing squad shortly after.

Wessels’ decision to step down will mean that he will not continue coaching the Melbourne Rebels for the Trans-Tasman portion of Super Rugby season, but will spend the remainder of his contract working closely with Stephenson in a transitional role across all elements of the Rebels’ rugby program.

Under Wessels’ guidance, the Rebels won just three of their eight Super Rugby AU fixtures this year and finished fourth in the standings.

Not an easy decision

He said his decision to resign from his position came after much reflection.

“Over the past few weeks, I’ve reflected a lot and I feel the time is right to pass the baton to someone else,” Wessels told the Melbourne Rebels’ official website. “Living in Melbourne and coaching the Melbourne Rebels has been a wonderful experience. I’ve learnt an incredible amount, built some really strong friendships and I feel confident that I am leaving the club in a really good place.

“When I was first appointed interim head coach at the Western Force I had the final three games of the 2016 season to start leading and preparing the club for the future. It gave me the opportunity to gain some valuable experience and test myself without the full responsibility of the job. I would like to give someone else that same opportunity; to test themselves and grow for the next phase in the club’s journey.

“I’d like to thank my wife for her incredible support in our Rebels journey – being at home with young children whilst your partner travels for their role is often a much harder proposition and I couldn’t have got through the last two Covid impacted seasons without her amazing backing.

“I’d also like to thank our coaching team and staff at the Rebels who have been a pleasure and a privilege to work alongside. A big thank you also to the Rebels members and supporters, you have shared the highs and lows alongside our team and I appreciate all your support that you have shown me.

“Finally, I’d like to thank the playing group here at the club, we’ve been unlucky this season, but I know with the type of men that you are, success is just around the corner.”

A message from Dave Wessels for our members, partners and supporters pic.twitter.com/EIEQJbpt4T

Stephenson said he respected Wessels’ decision and acknowledged his significant contribution to the club over the last four years.

“When Dave commenced the role at the end of 2017 it took a very special coach to lead our club through a period of intense change and he has done an almighty job to establish and evolve many foundations that the club will continue to build on in the future,” he said.

“Dave developed Wallabies, identified and unearthed some elite talent, achieved the most successful seasons in the club’s history amongst some very memorable victories. Dave’s work ethic, detail, desire, generosity and leadership were hallmarks of his tenure and I look forward to working with him over the coming months to set the club up for future success.”

Docherty thanked Wessels for his dedication to the club, especially acknowledging his commitment and leadership during the recent Covid affected seasons.

“Dave is one of the finest people going around in rugby, he is passionate, dedicated and has left nothing on the table in respect to his commitment to our club,” he said.

“This is no more evident than during the impacts of Covid across the past two seasons. Dave’s leadership and sacrifice during this time was outstanding as he managed the club through a whole season on the road for over three months last year and a month this year, without his wife and three young children who stayed in Melbourne.”

Over a three-year period, between 2018 and the end of the 15-team Super Rugby competition in 2020, Wessels led the Rebels to a 63 per cent win rate in the Australian Conference. As well as memorable wins over the Highlanders (twice), the Lions and a record-breaking win over the Sharks at AAMI Park. The Rebels finished second in the Australian conference in 2018, 2019 and 2020 (competition suspended due to Covid).

The Rebels board and club Management will now work on the plan for the upcoming Super Rugby Trans-Tasman series commencing on May 15 and will communicate its decisions next week.