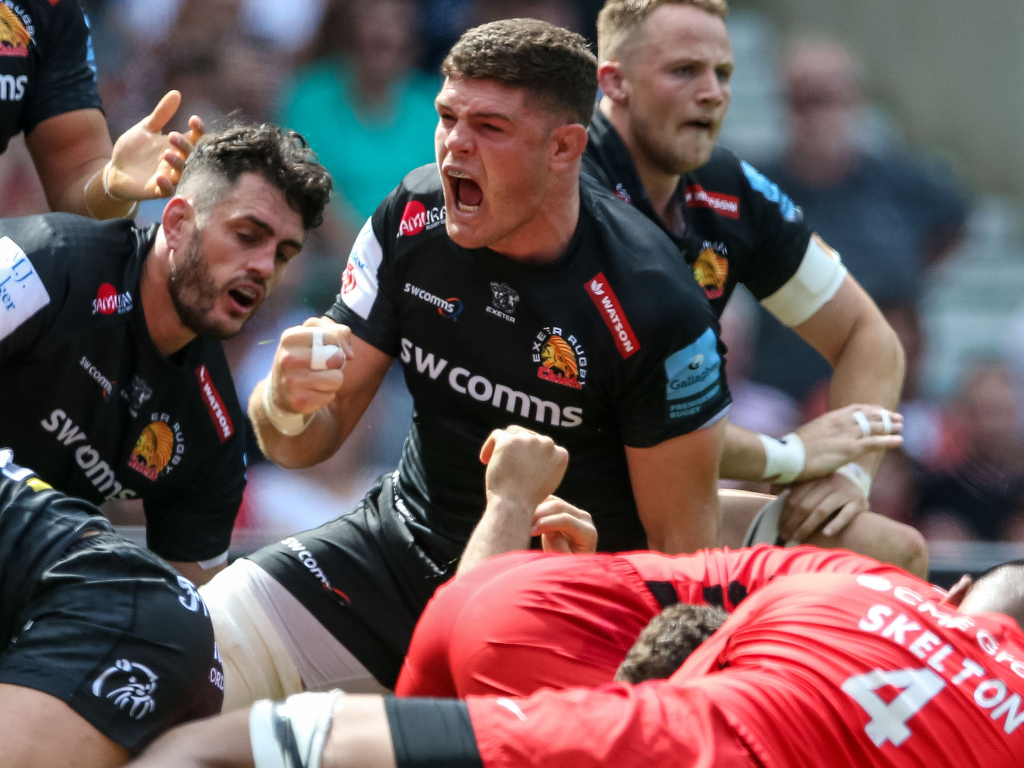 Exeter Chiefs have announced that long-serving back-row Dave Ewers has signed a new contract at the Premiership club.

Ewers, 29, has been part and parcel of the Chiefs mix for over 10 years, but the forward will be extending his stay a little longer after he became the latest member of Rob Baxter’s squad to commit their future to the Devon side.

Just days after Ben Moon, Harry Williams and Jack Maunder all put pen to paper on new deals, the powerhouse is the latest name at Sandy Park to sign a new long-term contract with the current Premiership leaders.

Since making his debut in a memorable British & Irish Cup fixture away to Newport, Ewers – a key component of the much-talked about Chiefs pack of forwards – has since gone on to feature in 161 first-team games, scoring 19 tries in the process.

Widely regarded as one of the most formidable forwards playing in English rugby’s top flight, the news that Ewers will be continuing to ply his trade in Chiefs colours is seen as another major boost for director of rugby Baxter.

“It was an easy decision to make,” said a delighted Ewers. “Although I’m not considered as one of the originals, I was there in the Championship year and I’ve seen how the club has changed massively. For me, it’s been an honour to be here all that time and be part of what has been a great journey.”

At the same time, though, Ewers insists even better days lie ahead for the Chiefs, particularly given the make-up of the current squad and that which is being put together by Baxter for next season.

“It’s exciting times,” he added. “If you look at the squad, all the boys are of an age where they are hitting their prime. Each year the squad is getting better and better – and with the signings we’ve made, it’s only going to get better.”

📹 – CHIEFS TV: @ExeterChiefs fans can expect more of this from back-row forward @dave_ewers after he signed a new deal with the club pic.twitter.com/YjfV2Gpfk2

Indeed, near misses in recent Premiership Finals at Twickenham have only added to Ewers’ hunger to succeed with the Chiefs.

“Obviously, the disappointment of losing in a couple of finals is there,” he continued. “I knew I wasn’t ready to leave without winning something big. Thankfully, this contract negotiation was a lot easier than the last, purely because I wasn’t injured. This time round, I’ve been able to play regularly and show the coaches how much I want to be at the club and what I could offer moving forward.

“The previous contract I was just coming off an ACL reconstruction, so I was fighting the tide a bit coming back from injury. Now, I’ve managed to string a good number of games together and I am really enjoying it!”

Those who have watched the Chiefs in action will testify that Ewers has certainly been on the top of his game, but he insists there is still room for improvement over this next contract.

“I’m happy with how I have been playing this year, but I’m also excited to see how far we can go,” he said. “I still feel there is a lot of improvement I can work on in the months and the years ahead.”