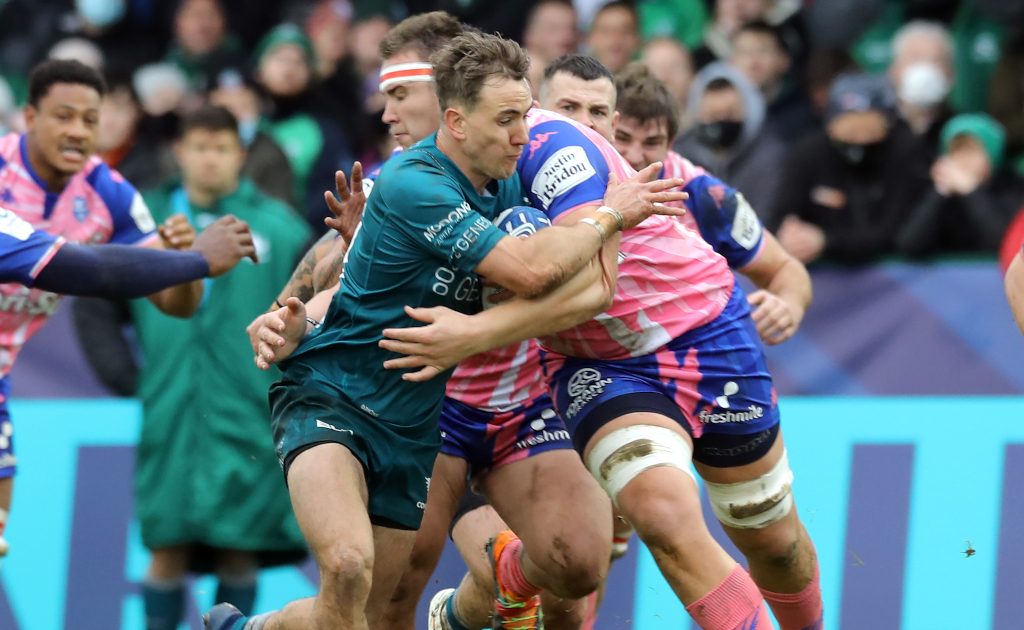 Connacht claimed a 36-9 bonus-point win over Stade Francais as they kicked off their Champions Cup pool campaign in style on Sunday.

Stade only had three Nicolas Sanchez penalties to show for their efforts. All Black centre Ngani Laumape was a late withdrawal, with Waisea Nayacalevu, Clement Castets, Yoann Maestri and Sekou Macalou also among the absentees.

Connacht started as the aggressors and their approach was rewarded when scrum-half Blade burrowed his way over after a 10th-minute maul. Carty slotted the extras for a 7-0 lead.

Playing their first Champions Cup game since 2016, Stade worked themselves back into proceedings and opened their account when Sanchez landed two penalties, one from inside his own half.

Both were awarded at the scrum to reduce the deficit to one in an entertaining opening quarter. Telusa Veainu broke into the Connacht 22 but was guilty of throwing a loose offload.

The westerners’ faith in their lineout was clear, given they turned down several kicks at goal. Their confidence in their set-piece was again justified when Porch touched down.

Blade burst from the tail of a lineout and — after a few phases — Carty’s beautiful looping pass found the Australian in acres of space and he sped over. The conversion was wide, but the hosts were good value for their 12-6 lead.

A familiar pattern emerged as Connacht scored try number three on the stoke of half-time. A powerful lineout drive was stopped close to the line and the westerners opted to spread the ball wide to the backs.

Once again, Carty found himself in space and — for the second time — he found an unmarked winger, this time Wootton, with a looping try assist pass. The Ireland fly-half added the conversion, widening the gap to 13 points.

The second half was fractious in nature and the French side had another penalty from Sanchez, which was the only score for first 15 minutes.

Connacht wrestled back control and finished the game off in style – with tries from Masterson, Kilgallen and Prendergast – to wrap up the maximum haul.

With the gusting wind causing problems for Sanchez’s kicking, Stade could not take advantage of their larger share of possession and Connacht stung them late on.

Replacement Masterson got over in the corner in the 69th minute, with Stade having failed to deal with a Kieran Marmion grubber kick. Carty’s conversion made it 26-9.

Three minutes later, Conor Oliver made the initial incision and quick recycling paved the way for Academy talent Kilgallen to coast over for his first Champions Cup score.

Industrious flanker Prendergast fittingly finished off the scoring on the 80-minute mark, muscling his way over for an unconverted effort.

Sale Sharks kick off with win at Ospreys

Elsewhere, Sale Sharks held off a fierce Ospreys fightback to launch their Champions Cup campaign with a 21-13 victory in Swansea.

The Ospreys managed a Gareth Anscombe penalty in reply, and they looked down and out before dominating the second period, helped by Sale lock Lood de Jager and flanker Ben Curry being sin-binned.

De Jager received his yellow card just before the interval, and Sale played the second half a man down for 17 minutes.

Wing Luke Morgan scored a try for the home side, with substitute Josh Thomas adding a penalty and conversion, and Sanderson will know it ended up being a lot closer than it should have been.

Ultimately, though, it was an important away win that sets Sale up for a full-scale tilt against French heavyweights Clermont Auvergne at the AJ Bell Stadium next weekend.

Sale, European quarter-finalists last season, were led by Tom Curry, whose twin brother Ben joined him in the back-row, while there were also starts for England newcomers Raffi Quirke and Bevan Rodd.

It had been a difficult and emotional week for the Ospreys after one of their players – 25-year-old hooker Ifan Phillips – suffered life-changing injuries following a road traffic collision.

In tribute to their colleague, the Ospreys squad all wore shirts with the number two and Phillips’ name on them during the warm-up.

Sale swept into a third-minute lead when Van Rensburg capitalised on woeful Ospreys midfield defence, brushing off two tacklers and claiming a try that MacGinty converted.

Although Anscombe opened the home side’s account through a ninth-minute penalty, they soon fell further behind as Sale’s juggernaut pack drove a close-range lineout and Ashman touched down.

MacGinty’s conversion made it 14-3, and the Ospreys already had a mountain to climb following an opening phase dominated by the Sale forwards.

The Ospreys could not establish any foothold in Sale’s half, and the visitors had no intention of letting their domination slip.

Further relentless pressure resulted in a try for Du Preez, again converted by MacGinty, and Sale were chasing a bonus point with barely a quarter of the game gone.

The Ospreys enjoyed a belated spell of pressure as the interval approached, and their cause was helped when De Jager received a yellow card from Italian referee Andrea Piardi.

It came following several Sale technical infringements, but the visitors comfortably kept Ospreys at bay and they completed an impressive opening 40 minutes’ work by holding an 18-point advantage.

Anscombe did not return for the second period after failing a head injury assessment, being replaced by Thomas, and Ospreys immediately blew a golden try-scoring opportunity created by Protheroe’s searing break, but Webb could not deliver a scoring pass.

Webb, though, made amends shortly afterwards when he floated a long pass to Morgan, who finished impressively in the corner, with Thomas converting to cut the deficit.

It was a strong third quarter from the Ospreys, and a successful Thomas penalty hinted at further potential of an unlikely comeback.

Sale again did not help themselves, with Ben Curry collecting a yellow card 11 minutes from time, and the pressure continued to mount.

But Sale held on, and were only narrowly denied a bonus-point score in final minute when Quirke just failed to ground the ball ahead of Ospreys centre Michael Collins.