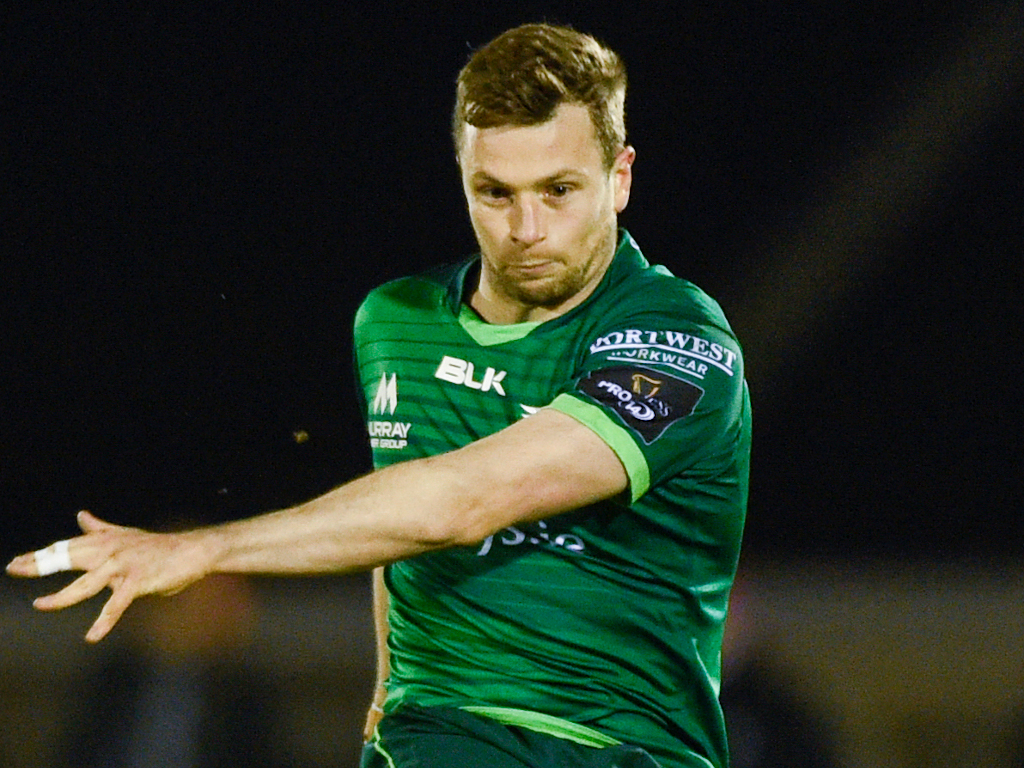 Connacht won in Dublin for the first time since September 2002 as fly-half Jack Carty masterminded a seismic 35-24 bonus-point win over PRO14 kingpins Leinster at the RDS Arena.

Itching for an Ireland recall, Carty scored 25 points to end Leinster’s proud 26-match PRO14 winning run. It was their first home defeat to a fellow Irish province in more than five years.

The player of the match touched down twice and kicked 10 points as Connacht, stung by last Sunday’s home defeat to Ulster, galloped into a 25-5 half-time lead.

Alex Wootton’s late try had cancelled out Scott Penny’s lone score for a much-changed Leinster, who had lost the returning Jonathan Sexton to a failed head injury assessment.

The visitors’ promising start was rewarded in the eighth minute when Carty picked off Ross Molony’s high pass and raced clear to score from 55 metres out.

Carty’s conversion was followed by a 12th-minute penalty miss, but the Athlone man was soon over for his second try. Having combined with Caolin Blade on a speedy break, he then bundled his way over with support from Quinn Roux.

Now 12-0 down, Leinster steadied themselves despite Sexton’s untimely departure. McGrath exploited some space around the fringes and sent flanker Penny over for his sixth try of the campaign.

The conversion was nudged wide by McGrath, though, and Carty strung through back-to-back penalties, the latter one rewarding John Porch for hunting down Jimmy O’Brien, who had shifted to number 10 in a makeshift Leinster backline.

Within reach of the interval, Connacht’s aggressive defence put them back into try-scoring range and winger Wootton was released for the left corner with Carty converting with aplomb.

McGrath sniped straight through from a ruck, barely three minutes into the second period, and although O’Brien converted, Carty swiftly hit back with his third successful penalty for a 28-12 scoreline.

One of Leinster’s big hitters on the bench, Sean Cronin broke menacingly off a maul to send Baird over for an unconverted 56th-minute try.

A subsequent Leinster score, inspired by O’Brien and finished off by replacement David Hawkshaw, was disallowed for obstruction by Andrew Smith.

Daly, a real powerhouse in midfield for the victors, swooped on a Hawkshaw pass and fended off Smith to claim Connacht’s bonus-point try, converted by Carty.

It sealed their first ever RDS victory, with Leinster’s only consolation being replacement Byrne’s close-range seven-pointer right at the death.

Earlier, Ulster maintained their 100 per cent start in the PRO14 as they began the new year by beating Irish rivals Munster 15-10, although they were made to fight all the way at the Kingspan Stadium.

The Conference A leaders inflicted the first defeat of the season on Munster, the Conference B pacesetters who came to Belfast without their front-line players but still managed to claim a losing bonus-point despite trailing 15-3 at half-time.

First-half tries from wings Matt Faddes and Ethan McIlroy, plus a conversion and a penalty from John Cooney, seemed to have put Ulster in full control.

However, Munster battled back in the second half, despite having skipper Billy Holland yellow-carded, while Ulster failed to register a single point.

Munster’s only score in the first half was from a Ben Healy penalty and they next scored in the 82nd minute when Ulster, a man down after Callum Reid’s yellow card, could not stop Darren Sweetnam from diving over.

Ulster scored a superb try after six minutes when centre James Hume’s pass put Jacob Stockdale in space and he released Faddes to score at the corner, although Cooney was unable to provide the two extra points.

However, the hosts strayed offside five minutes later and Casey slotted the three points in reply from near the posts.

Ulster then crossed for their second try when Cooney ran a free-kick which ended up with winger McIlroy getting on the end of Billy Burns’ kick-pass several phases later.

This time Cooney converted with another touchline shot, and he then extended their lead to 15-3 just before the half hour was up after Chris Cloete strayed offside in a strong Ulster attack.

After a fairly uneventful opening period to the second half, Holland was shown a 59th-minute yellow card as Ulster tightened their grip on possession and territory.

Yet despite being camped in Munster’s 22 for nearly 10 minutes, the home side failed to score – Kieran Treadwell coming the closest – and even with 14 men the visitors lifted the siege through some great work by Cloete.

However, Healy was wide with a long-range penalty shot after 64 minutes and Munster managed to hold out while Holland was off without conceding any points.

The game ended with Ulster again under pressure and the visitors came close to scoring their first try after replacement Roman Salanoa drove through only for Thomas Ahern to be held up.

Then, with Ulster prop Reid in the bin at the end of the game, Munster finally got over in the 82nd minute through Sweetnam, a try which was converted by Jack Crowley.