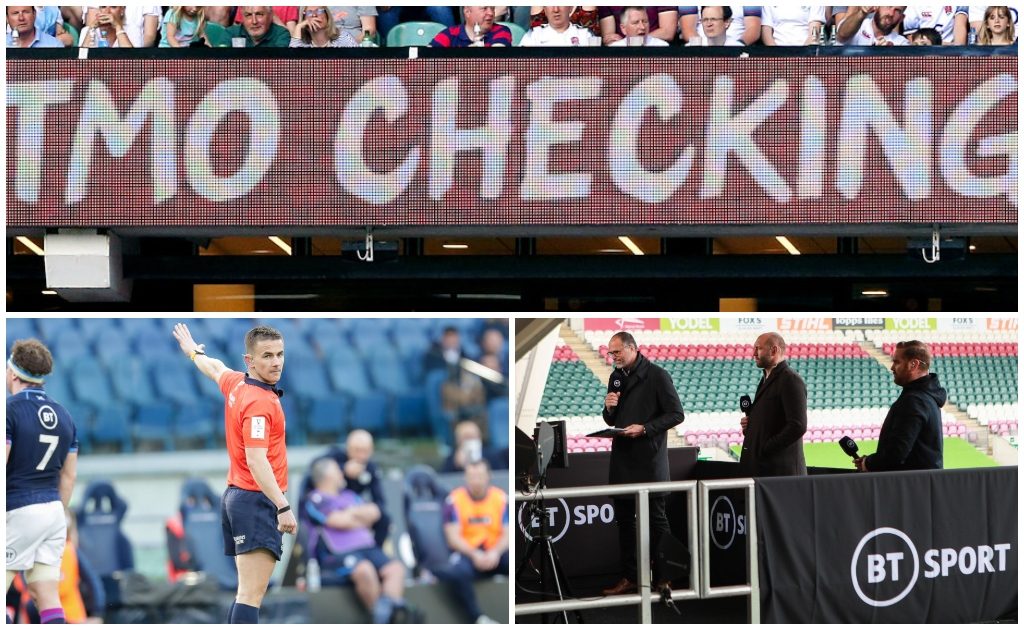 In this week’s Five takeaways from the Premiership round, Planet Rugby features writer James While tackled, in passing, the interaction between commentators and the third match official.

In an exclusive piece, we delve a little deeper into this to examine exactly the challenges that the officiating teams are now facing.

In the Saracens v Exeter match this weekend, we witnessed 94 minutes of live TV commentary.

In that time period, there were around 47 queries or questionings of the match officials by the host commentary team, making the referee and his cohorts easily the most focussed topic of the matchday live feed.

Rugby is a complex game that relies upon its officials, players and commentators for simplification and explanation. Fans and viewers have very wide ranging maturity of in-depth understanding of the laws and their application, and without wishing to insult anyone, there are few that have the intuitive understanding of rugby, like they do of a simple game such as football, which owes its global dominance to that ‘jumpers for goalposts’ simplicity of structure.

Not only does one have to consider if an offence is committed or not, but in order to have anything near an exciting spectacle, the important words ‘materiality’ and ‘proportionality’ are absolutely crucial. Does it matter if the blindside defending wing 30 metres from the action moves six inches offside defending a midfield ruck? Probably not. But the same offence committed by one of the channel pillars around the ruck can turn a flowing attack into a disrupted move and that’s where an advanced understanding of the game is necessary to deliver an attractive spectacle.

At the moment, (and we hasten to add this is quite a recent trend, possibly dating back to the infamous ‘Rassie-Rant’ during the Lions series) there’s too much rattle about referees – and ironically, that itself makes for fairly dull TV watching if the commentary protagonists spend most of open play time reverse engineering decisions that have been and gone.

But, communications between all involved with the game are key to assisting and informing the fans. To think that one group works in isolation of the other is not the case and you’ll find that the officials, directors, commentators and game regulators are remarkably united in terms of delivering a matchday experience as clearly as they possibly can.

Let’s take a look at how this whole system works:

The man in the van

At every Premiership game (or above) there is a team of match officials which includes a referee and two assistant referees, a TMO (Television Match Official) in the director’s van (or similar) a fourth match official to deal with protocols, plus citing commissioners and the like. From that you’d glean that officiating is equal for all sides, however in practice, that’s not the case.

The main TV match will, on average, have between 10 and 16 cameras in situ. The TMO will have a number of HD screens (normally three-four, the largest one around 32″) together with a production team feeding relevant replays, as advised by their analysts, for the coverage of the game.

However, an outlier match that has lesser interest might see four or five cameras at the game, a TMO with an 18″ low res screen and far less input from the production team in terms of live replays.

During the live televised games, a TMO can choose whether or not to have the live comms on or off. The safe bet is to leave them on – for three reasons 1) to ensure alignment with the incidents the comms teams are discussing 2) to hear directors/analysts preparing incident replays 3) crucially, to also inform the TV comms team the legal reasoning over contentious calls.

Picking up on point three, on Saturday Alex Dombrandt was penalised for pushing Joe Marler into a high tackle. At the point Wayne Barnes called the decision, the random watcher could be forgiven for confusion, but the fact that Tom Foley was already briefed on the new ‘push’ directive and then was able to follow up with a short reminder to the commentators during the game allowed Nick Mullins and company the gift of superb explanation of a very difficult but correct call by Barnes.

Going back to the original points, the key to making this work seamlessly is to remove bias, conscious or unconscious, from both the directing team and the comms team. Many of us have heard something approaching cynicism when it comes to rather patriotic overseas broadcasters who might occasionally turn Nelson’s Eye to an incident that could cost their own country a Test match, but thankfully (at the risk of justifiable rugby xenophobia) in the UK, we seem to have a little more integrity in the game than that, but the key question is that do we want to put the TMOs in the position of being accused of being manipulated, whether consciously or sub-consciously?

The biggest inequality is the infrastructure offered to the TMO on a game by game basis. On the big games, the TV analysts almost act as third and fourth eyes for the under-pressure TMO man in the van – they’re able to retro-watch incidents to scan for illegality, allowing the TMO to keep up real time. Yes, this in itself creates an element of potential bias, but it’s a working solution that allows the TMO a little much-needed support.

In those less well televised games, that back-up infrastructure doesn’t exist, or accurately, is much diluted. Nor does the TMO have the variety of angles that they enjoy at the bigger games – leading one to conclude that the whole referral process is totally different depending on the importance and TV schedule surrounding the fixture.

Now, you may argue that ‘it’s the same for both teams’ but, when head contact habitually attracts a three-to-six-week ban, it’s a dead-set certainty you’ll get away with a few more incidents in these outlier games than during the big ones, a marginal difference that might mean the availability or not of a host of star players for the rest of the campaign.

Looking back at what we have learned, it’s clear we have a few issues to deal with:

1. Influence of production team on replays.

2. Influence of commentators on TMOs.

3. Creating a level playing field in terms of support for officials and creating the same viewing facilities at each game.

4. Marketing the game in an educative, informative and inclusive fashion.

To sort 1) out, we don’t want to take away the assistance of the production team on replays, but firstly, we need to ensure there’s no team bias and secondly, we need to ensure that the same assistance is available at each match. Our suggestion is therefore to offer a couple of well briefed professional analysts, possibly pathway referees, working with the TMO in the same way VAR is implemented – they focus on the retro-play, the TMO focuses on the here and now. Do this, and you remove the potential from bias (or accusation of bias) for the production team.

Sorting out 2) is rather more difficult and relies upon the match broadcast team to take a conscious decision to criticise only when needed and when doing so, play the ball (the decision) as a one-off, without getting personal on the referee or on a series of potentially questionable decisions. ‘Materiality’ has to become the new norm in terms of discussion, over and above marginality and it would assist if the comms team could reflect that. We can all look at any given ruck and find a minor transgression if we so desire (ask Rassie Erasmus – he built the hopes of a nation on doing exactly this!) but that materiality is the key. The other solution is a simple banning of comms feeds, which unfortunately would remove the feedback between the TMO and comms team that currently exists. If the first method doesn’t work, then it might be time to turn to that ban on comms feeds, which isn’t really where we want to go, as it closes off positive collaboration.

On point three, there is an absolute need to ensure that the TMOs have the best tech and the same tech available at each outing. That means two (or three) 32″ HD screens at a bare minimum at each fixture, some analytical support and the ability to see the necessary camera angles.

Lastly, on point four, this is also about each of the contributors to a matchday experience working together effectively to deliver an informative and educative spectacle. We need briefings from the officials, we need two-way feedback, but above all, we need each of them to understand the responsibility that’s vested in their various roles. We believe this exists, but at the moment, there’s a wave of rattle about referees which is counterproductive.

Sort this all out and we might just look forward to the de-escalation of the wave of referee criticism we’ve seen in recent times.