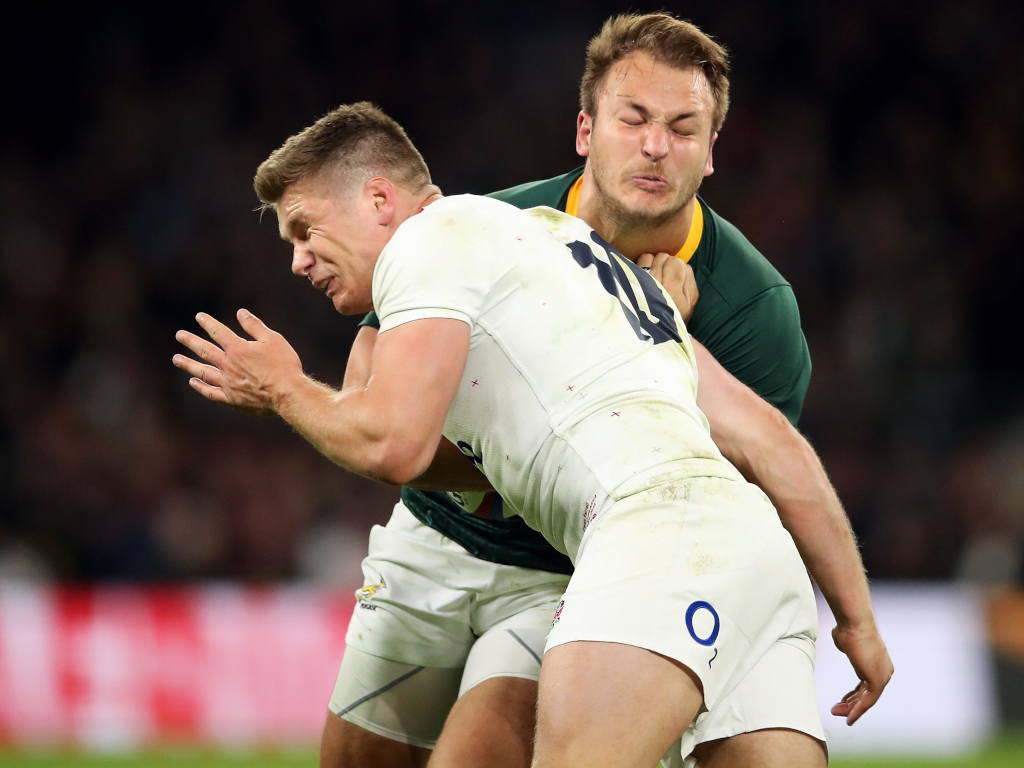 Following the red card handed out to Owen Farrell for his awful tackle on Wasps’ Charlie Atkinson, features writer James While delves into a debate which has caused much furore online.

Taking a stroll down the fetid corridors of social media this week and you’ll glean that the preferred punishment for Farrell’s red card against Wasps should be somewhere between death by electric chair to 30 years hard labour.

Outrage by proxy reins hither and thither, with hyperbolic assumption ruling fact. In Farrell’s career, there have been a few tackles that have been perhaps debatable in legality, but the simple truth is that this is his first red card in 217 professional games and only his second citing in 10 years as a professional.

Yes, there’s been a few questionable moments; South African fans, who seem to conveniently forget the actions of the likes of Marius Bosman, Corne Krige and Elandre van den Bergh in days gone by, will never forgive Farrell for a technically poor and clumsy tackle in 2018 in the dying minutes of a Test on André Esterhuizen, a hit that effectively sealed the fate of the Boks on that day. Nevertheless, the truth is that the on-field referee, Angus Gardner, TMO and the citing officer saw very little wrong with the collision, even after several reviews.

Then there was the perhaps dubious clash of shoulders two weeks later at Twickenham, when the Saracen threw his body in the path of Izack Rodda as the Aussie sprinted for the line. No sanction was made, despite the protestations of Michael Cheika, with on-field referee Jaco Peyper awarding a penalty; not for the Farrell barge but for an earlier offside by flanker Mark Wilson on the 22 metre line.

For a player that’s played 288 matches and averaged, say, 12 tackles per game, that equates to something around 3,500 tackles, none of which, until Saturday, have been deemed threatening enough or illegal enough to warrant anything but a penalty. In that time, Farrell has received nine yellow cards, six for poor tackles. His two yellows at Test level came for obstruction on an open-field runner (Matt Giteau) and for killing the ball against New Zealand six years ago. In his time with England and the Lions (87 Tests), the Saracens fly-half has conceded precisely 33 penalties, an average of less than half a penalty a game. These are not the statistics of a dirty player, nor a serial offender. In fact, they’re pretty much exemplary from a defender that leads the blitz line and is particularly abrasive in his work.

However, to study these facts in isolation is dangerous. Farrell has been living on the edge of legality for a long time; if you unpack those reasons, he defends in channel one, where he, a relatively smaller man, has to stop a lot of heavy traffic, often as the second tackler in the hit – that means often his clear target is the upper body as the first (forward) defender will almost always have gone low. Secondly, his background is one of mixed codes; embracing rugby league as much as union, where double team tackles, one low and one high, are a feature of defensive technique. Lastly, his absolute commitment to the power hit means his commitment is an early one, thus preventing marginal adjustment if a player moves, changes height or direction.

Add the above up and you’ll agree that this red card was one that was going to be inevitable. That doesn’t mean, however, that he should be penalised by a panel on actions that were, historically, deemed legal or were previously punished with penalties or yellows. The disciplinary panel, like a court of law, will examine two things only; the events that led up to the card on the day (the offence) and Farrell’s track record (previous convictions) where there is just one blemish four years ago which resulted in a two-week ban.

🗣 – "The idea that the referee said that our player ran in and shoulder charged him (Farrell) is ridiculous."

Is @qantaswallabies coach Michael Cheika right to be aggrieved that his side were not awarded a penalty try at Twickenham on Saturday? 🤔

The main task the panel have is to decide entry point: high or medium danger. Outcome judged, there is no question that the entry point was medium, but the media furore and current climate for safety in rugby may see that upgraded.

The result will be either 10 weeks (high danger) or six weeks (medium). Farrell’s record will then see a 50% reduction and remorse, as per precedent, to five or three weeks. In short, 3-5 weeks, don’t do it again, have a few weeks’ holiday and see you in October in the England training camp.

At the foot of the charge sheet for the incident is a much bigger issue. The fact that even the most myopic Saracens or England fan will agree this was an accident waiting to happen and that Farrell’s tackle technique needs a degree of amelioration to comply with the picture that the modern safety-first referee is looking for.

Perhaps it’s a godsend it happened in a nothing game in the Premiership rather than a crucial Test match where his action could have cost a Six Nations title or a World Cup tie. Farrell needs to sort his work out, tackle with greater precision and with deeper detail. One thing is for sure, he’s the ultimate competitor and he’ll be as anxious as anyone to sort his shape out, be legal, fair but hard and, above all, never to let his team and fans down as he clearly did on Saturday.