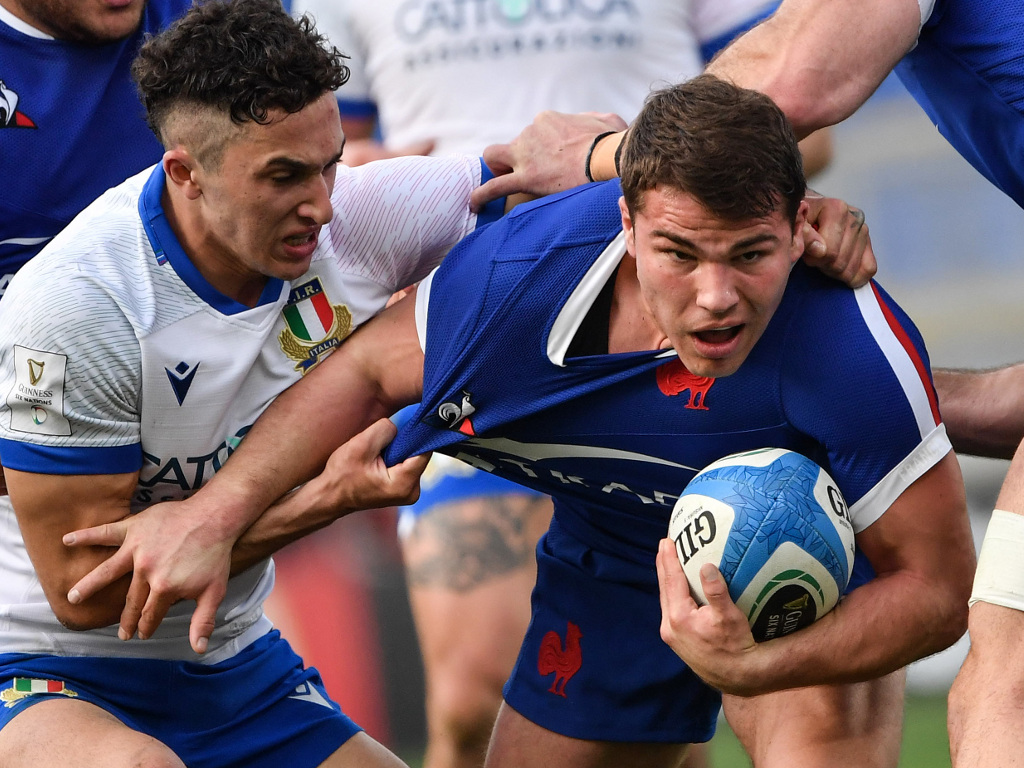 France made a fantastic start to this year’s Six Nations when they cruised to a 50-10 victory against Italy at the Stadio Olimpico in Rome on Saturday.

As the scoreline suggests, this was a one-sided affair with Les Bleus holding the upper hand for long periods and they eventually outscored their hosts by seven tries to none with Teddy Thomas (2), Dylan Cretin, Gael Fickou, Arthur Vincent, Brice Dulin, Antoine Dupont crossing the whitewash, while Matthieu Jalibert finished with a 15-point haul after slotting six conversions and a penalty.

For Italy, Luca Sperandio scored a try and Paolo Garbisi succeeded with a penalty and a conversion.

Italy were competitive during the early stages and came close to scoring shortly after the kick off when Juan Ignacio Brex made a fantastic break but Gabin Villiere saved the day for France with a cover tackle deep inside his 22.

It didn’t take long for the visitors to open the scoring, however, after Thomas put them onto the front foot with a mazy run which tore the Azzurri’s defence to shreds. The ball was then taken through some phases in Italy’s 22 before Cretin crashed over for the opening try.

Jalibert converted and increased Les Bleus’ lead when he landed a penalty in the 10th minute. Despite battling to cope with the intensity of France’s attacks, Italy eventually opened their account when Garbisi slotted a penalty midway through the half after Charles Ollivon infringed at a breakdown.

Despite that penalty, it was still France who dominated proceedings and they were holding a 24-3 lead by the half-hour mark thanks to well-taken tries from Fickou and Vincent. The latter one came after a moment of magic from Dupont who, despite being caught in possession deep inside Italy’s 22, still did well to throw a short inside pass over his shoulder to the on-rushing Vincent, who had an easy run-in under the posts.

Italy needed a response and they thought they had done that when Stephen Varney did brilliantly to sell dummies to Cyril Baille and Dupont down the left-hand touchline before offloading to Monty Ioane, who outpaced the cover defence before crossing in the left-hand corner. That score was disallowed though after television match official Karl Dickson ruled that the final pass from Varney went forward and the visitors had their tails up at half-time.

Les Bleus continued to dominate in the second half and in the 49th minute Dulin scored his try after gathering a well-weighted chip kick from Villiere inside the Azzurri’s 22.

With their bonus-point secured, France turned on the style and had the game in the bag courtesy of two excellent tries from Dupont and Thomas midway through the half.

In the 54th minute, Dupont was rewarded for a brilliant performance when he gathered an inside pass from Thomas, after the flyer burst through the home side’s defence with a powerful line break, and shortly afterwards the scrum-half returned the favour when he found himself in the clear inside Italy’s 22 and Thomas went over for his first try.

To their credit, Italy did not surrender and in the 65th minute they were rewarded when Sperandio caught the defence napping when he chipped ahead and regathered down the right-hand touchline before crossing for his side’s only five-pointer.

But France finished stronger and in the 74th minute Thomas dotted down out wide – a score which also brought up a half century of points and sealed an emphatic win for Les Bleus.