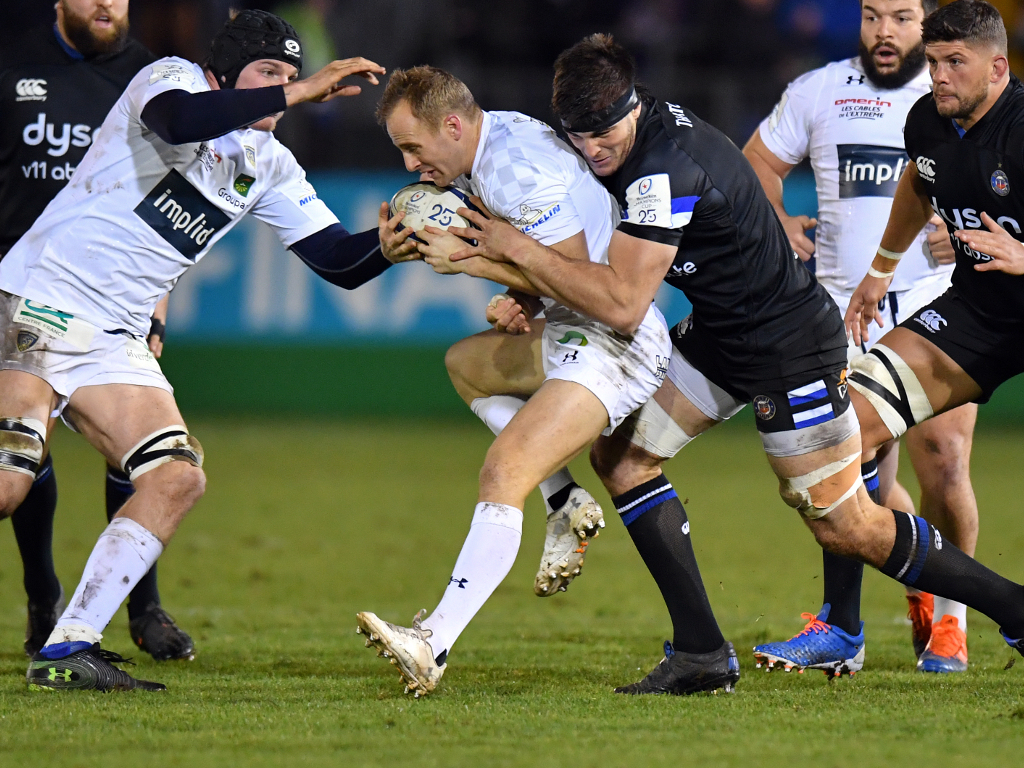 Clermont moved to the top of Pool 3 in the Champions Cup, provisionally at least, after easing past Bath 34-17 at the Recreation Ground on Friday.

With Ulster facing Harlequins on Saturday, this was an opportunity grabbed by the French outfit as they prevailed with a try bonus-point.

Veteran Scotland scrum-half Greig Laidlaw came off the replacements bench to kick Clermont into the lead with two penalties early in the second half before the French side’s backs let rip.

Right wing Ezeala crossed twice on his Champions Cup debut and also laid on a try for flanker Lapandry, with Laidlaw adding the extras for all three.

Clermont’s other try came from Kiwi centre Moala in the first half, while Bath – who both started and finished the scoring – crossed through Rhys Priestland and Jonathan Joseph.

Handling errors dogged Bath’s early efforts to gain the upper hand in this Pool 3 clash but Clermont’s indiscipline gave the home side plenty of encouragement.

Two penalties in quick succession established field position in the visitors’ 22 and strong carrying by Jamie Roberts, Elliott Stooke and Will Stuart softened up the Clermont defence for the opening score after 13 minutes.

Priestland found a surprising amount of space on the short side of a ruck and scored with ease, with the Wales fly-half converting his own try.

Bath, not the most adventurous of teams in the early months of the season, suddenly flicked the switch and began running the ball from quick line-outs and tapped penalties on their own 22.

With a crucial score to keep @ASMOfficiel in the game in the first half, George Moala is the @Heineken Man of the Match 💪

After this result and with the squad they've got, is the French side a contender for the #HeinekenChampionsCup crown? 👑 pic.twitter.com/PLyCHiPTLO

Too often the pass or offload went to ground but Roberts continued to test the Clermont defence and Priestland even spurned a certain three points in front of the posts in favour of a line-out.

The Challenge Cup holders rode their luck but managed to draw level after 27 minutes, as Moala brushed aside two tackles to score at the other end after a catch-and-drive by his forwards. Skipper Morgan Parra converted to make it 7-7.

Making a seemingly conscious effort to break away from the limited game plan of recent weeks, Bath continued to move the ball wide and encouraged their wings to roam.

However, Clermont came out after half-time in more focused mood and replacement scrum-half Laidlaw kicked an angled penalty to put them ahead.

Bath quickly responded and the flying Tom Homer combined beautifully with Stooke, who galloped up through the middle to get the hosts back on the attack. The follow-up play lacked fluency but Priestland landed a penalty to level at 10-10, with half an hour to play.

The Premiership outfit continued to leak penalties, however, and Laidlaw was on target at the other end to promptly restore Clermont’s three-point advantage.

Another Laidlaw effort from near halfway fell short but Bath were very much on notice.

The visitors had shown little of the undoubted pace and power in their back line until Isaia Toeava broke free, supported by centre partner Moala. Toeava handled again before Ezeala touched down at the posts.

Barcelona-born teenager Ezeala was unstoppable now, breaking free from the restart to send Lapandry over for a third try and, shortly after, latching on to Camille Lopez’s grubber kick to give Clermont a bonus point.

With Laidlaw adding the extras for each, the visitors had wracked up 21 unanswered points in less than 10 minutes, and Bath could only respond with a consolation try from Joseph that was converted by Freddie Burns.