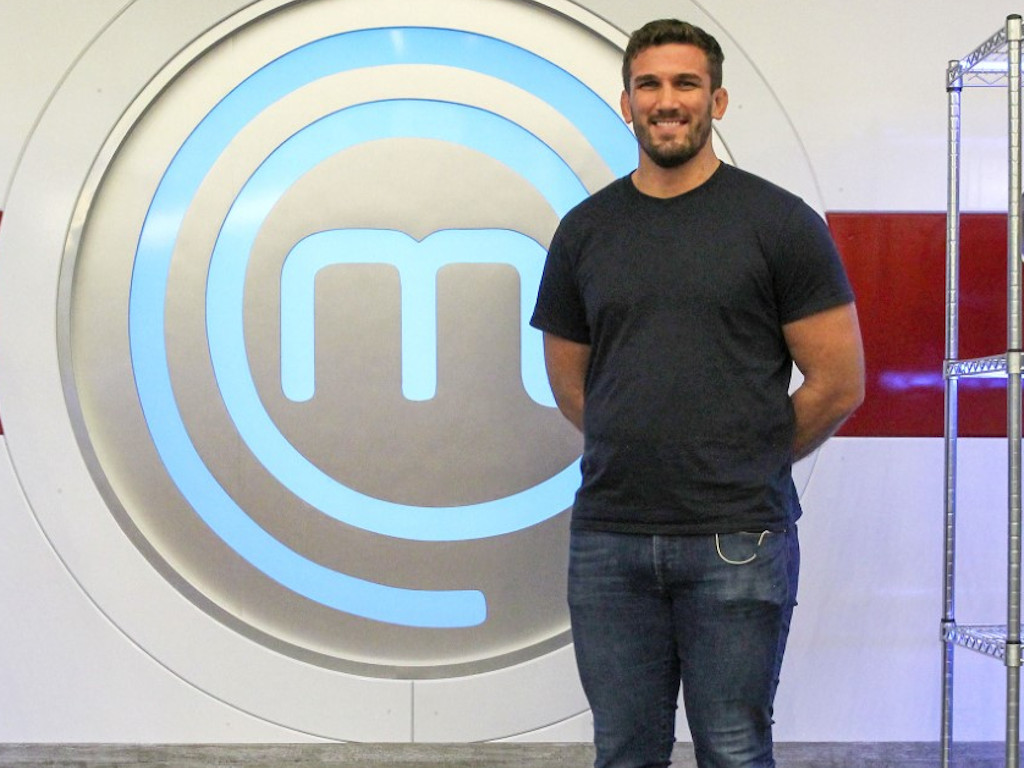 Christian Day is currently cooking up a storm on MasterChef UK and Planet Rugby features writer James While caught up with the former lock to talk food and rugby.

Day is one of rugby’s good guys.

A towering second-row in the colours of Sale Sharks and Northampton Saints, he was perhaps unlucky to miss out on international honours, despite an England squad call-up in 2015, but became a favourite of the Franklin’s Gardens fans for some 10 seasons, racking up an impressive 226 matches for Saints to go with the 99 he made for Sale Sharks.

Vocal in terms of game safety and player education for life after rugby, Day was also a key component within the Rugby Players’ Association, chairing the organisation for three years before taking up a full-time role as an RPA Player Liaison Officer.

This year the big Blackpool-born forward finds himself, by a combination of good management and a little fortune, in the finals week of BBC TV’s premier cookery show MasterChef and is throwing himself into fine dining with the same gusto he showed on the field of play.

“I guess cookery is something I’ve always loved and been interested in from a nutritional perspective as a player,” he explained.

“Every year I write my own little bucket list of things I’d love to do; MasterChef was actually one of those aspirations and once I’d retired from professional rugby and had a little bit of time, I saw the advertisement for new contestants and thought ‘sod it, let’s give this a crack’ and here I am!

“I have to say the process was a little deeper than I anticipated – ten page forms, interviews, screen tests and so on, but I was delighted when they chose me and have had an absolute ball delivering the show with the production team and fellow contestants.

“I guess as a professional rugby player, you’re always aware of the value of nutrition and, as a player, controlling your diet is crucial for many reasons. Many rugby dieticians will tell you ‘learn to cook properly’ if you want to get the best out of your nutrition.

“I always sum this up by saying when you get to the fridge, the easy option is generally the less healthy option, so yes, learning to maximise benefit from your food is a great asset,” noted Day.

“When you get past the heats in the show, the pressure you’re placed upon is significant,” he stressed. 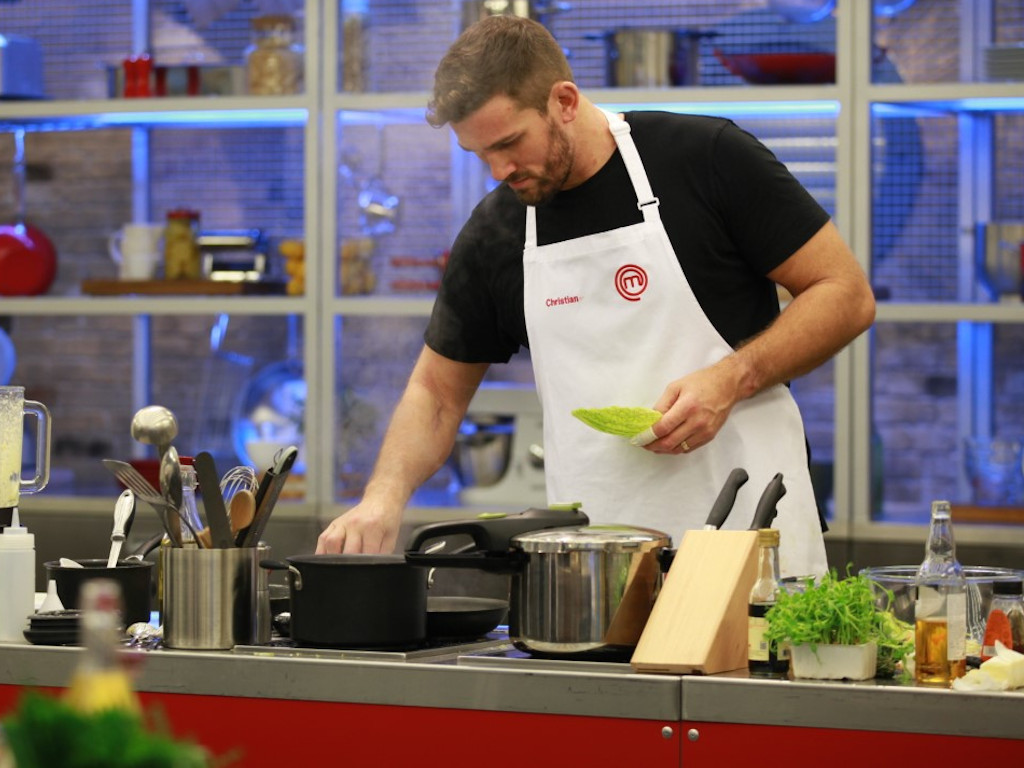 “I guess the one small advantage I had going into the competition was that I was familiar with speaking to camera and also that I’d performed under extreme pressure, albeit on the pitch. That pressure really does ramp up and when you’re preparing against the clock, I can assure you it’s equally as scary as playing against the best the rugby world can offer,” quipped Day.

“The later stages are an absolute step change in terms of intensity and the show’s challenges pull you way out of your comfort zone and into environments that stretch your skills much further than you even you thought possible when you first put the apron on!”

“As an example, one of my favourite moments on the journey was cooking on Nelson Day for the Royal Navy on HMS Diamond. We were driven to Portsmouth the night before with no idea what was going to happen the following morning – it was all cloak and dagger stuff – we may have twigged it was something naval but we’d no idea quite what until we saw Gregg Wallace and John Torode on the gang plank of the ship,” chuckled Day.

“Then we have the task of cooking for 120 heads; that’s a massive change up – as an example we elected to cook 140 plates of each course in case of mistakes – cooking the pear dessert alone for my family would have been taxing enough, but when you’re faced with peeling 30 kilos of pears then it sinks home just how big a difference fine dining on this scale is. Getting visual consistency in the plate from the first meal to the last is the biggest challenge and doing it within the confines of a tiny ship galley was something I relished, despite being 6’6” tall!

“It’s also key to act as a team at that point – assigning tasks and completing is as important as timing. MasterChef is great in that some parts of the show you’re working together, other times you’re competing against each other and that really does build a shared experience that’s unforgettable.

“I’m a big supporter of our Armed Services and the work they do, and are doing even as I speak within the current crisis, is exceptional. It was an absolute privilege to be part of their day and to share some time with some incredible professionals – pretty much a high point of my experiences to date,” confirmed the former Saint.

Northampton Saints have experienced something of a renaissance in the last year or so, playing high tempo attacking rugby driven by Chris Boyd and Sam Vesty, where player decisioning and on-field empowerment are key components of the Saints philosophy. Day likens his MasterChef experience with the transition many youngsters face when moving from junior club rugby into the professional environment, with listening and learning at the core of personal development.

“When you first move into a professional rugby set-up, the educational curve is huge and the quickest way to develop is to listen from the world class players and coaches around you. 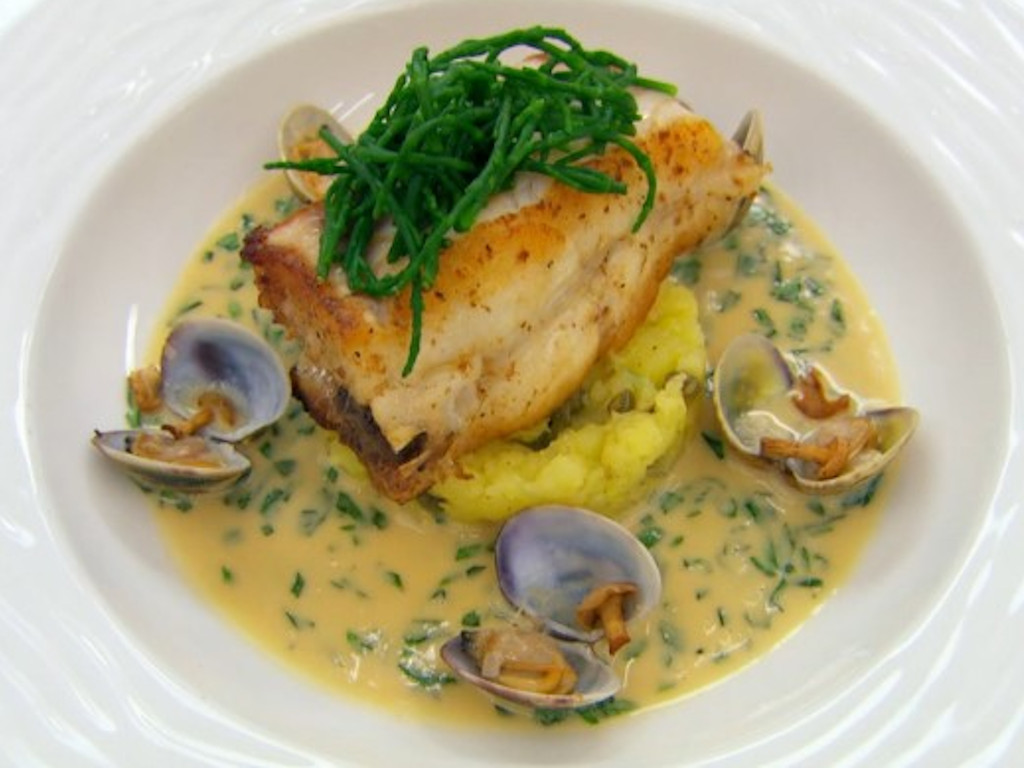 “The same applies totally to MasterChef. When you spend time with Michelin star chefs and listen to the wisdom of John Torode himself, you learn so much. It’s also key, for your own progression, to embed that learning each week in your own plate of food, showing that you’re both growing but also listening to the advice and guidance you’ve been given.

“I got ticked off by John and Gregg in a round where they praised my presentation but felt I needed stronger tastes in my food; I was damned sure the next round I gave them much stronger tastes – sometimes the difference between a good dish and a great dish is a just pinch of salt or pepper and learning how you deliver/balance that on a plate has been an absolute highlight for me.

“With rugby looking for marginal gain, it’s become absolutely commonplace for academies to employ nutritional advisors. At Gloucester, James Hudson the former Bath lock and a skilled chef has been actually inspiring the youngsters to cook properly and, dare I say eat themselves fit? Certainly, quality nutrition is key for both performance and injury recovery and I hope my time on the show will underline the difference a few culinary skills can bring.

“Some of the plates delivered by my fellow contestants on show have been superb – David, Thomas and I tend to major on classic British fine dining but then Natasha and Sandy do things I wouldn’t dream of trying and are very unique in their approach to flavours. It’s really quite an eclectic blend of styles, which allows us also to learn and challenge each other.

“However, my longest memories of MasterChef will be the fun I had. As a group and as the last seven contestants, we’ve spent a lot of time together, sometimes 12 hour days, and I feel we’ve made some strong friendships and we intend to stay in touch post The Finals. And that’s what dining and cookery all about isn’t it? Fun with friends.”

Christian continues in the MasterChef Semi-Finals, tonight (Wednesday), 9pm, BBC One and the series is available on BBC iPlayer.