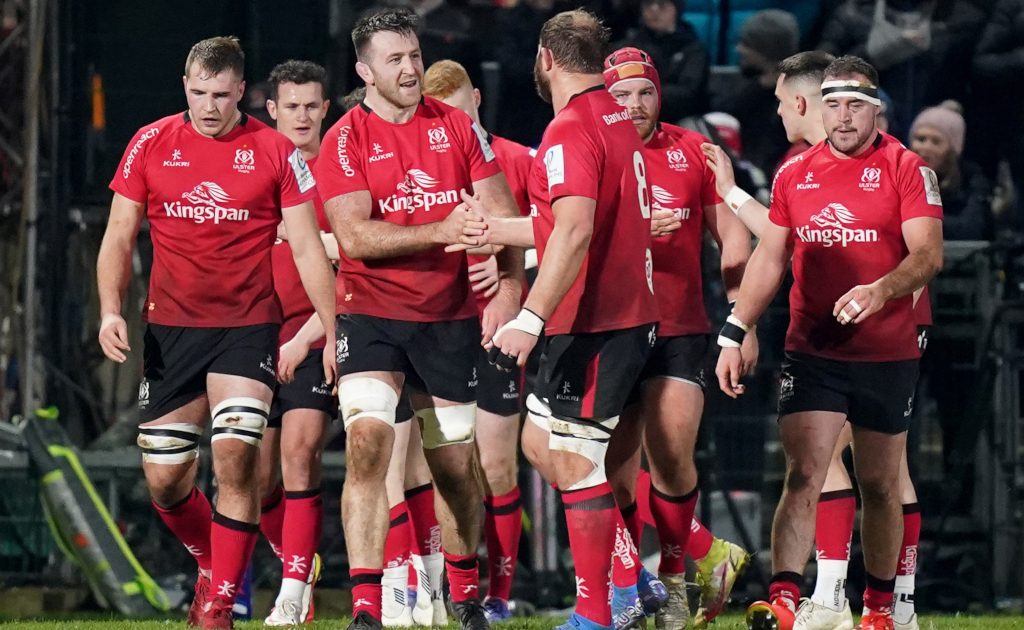 Ulster withstood a late comeback from Clermont Auvergne to secure their fourth consecutive victory in this season’s Champions Cup after a 34-31 triumph.

The Irish province played much the better rugby for most of the match and touched down twice in the opening 22 minutes through Rob Herring and Michael Lowry.

Dan McFarland’s men struggled with their discipline, however, and that allowed Morgan Parra to kick Clermont 12-10 ahead.

But when Herring went over for the second time just before the break, the hosts dominated much of the second period and appeared to have sealed the win as Duane Vermeulen and Robert Baloucoune crossed the whitewash.

Clermont never lost heart, though, and gave the home side a late fright when Jaco van Tonder, Alivereti Raka and Judicael Cancoriet scored, but the Irishmen had done enough to secure the win.

Ulster did all the early running and were rewarded when Herring touched down from a dominant driving maul.

It was a tactic which gave them plenty of success throughout the encounter, but they would have to wait for their next score from a lineout.

Ill-discipline was an issue for the hosts and Parra kicked successive three-pointers to give Clermont a 6-5 advantage.

Back came the Irish province, however, who once again pressurised the Auvergne line, and a brilliant piece of individual skill from Lowry saw them retake their lead.

Receiving the ball inside the opposition 22 but with a defender in front of him, the full-back produced a wonderful arching outside run and duly touched down.

Although two more penalties from the visiting scrum-half moved the Frenchmen in front once more, another dominant lineout drive resulted in Herring crossing the whitewash for the second time.

That score at the end of the first half gave McFarland’s men the momentum they needed after the break and Ulster appeared to put the game beyond doubt by the 65-minute mark.

Firstly, further good work from Lowry set up the position from which Vermeulen touched down before Billy Burns’ wonderful pass was collected and finished by Baloucoune.

That should have sealed the win but, to Clermont’s credit, they produced a spirited response and earned a losing bonus-point via Van Tonder, Raka and Cancoriet tries.

Auvergne then went in search of the winning score but the Irishmen held on for their fourth successive win in this season’s competition.

Bristol ended their Champions Cup pool phase campaign with a 52-21 bonus-point victory over the Scarlets in Llanelli.

Pat Lam’s team had already qualified for the tournament’s round of 16 in April, and a rousing finale that saw them score three tries in six minutes left Scarlets shell-shocked.

Bristol moved third in Pool B, although they will be overhauled by Munster if the Irish side defeat Wasps on Sunday and claim a bonus point.

Centres Semi Radradra and Ioan Lloyd scored early Bristol tries, yet it was not until the final quarter that they cut loose as a penalty try was followed by a rapid scoring burst, with Harry Thacker, Piers O’Conor and Ratu Naulago all touching down, before Radrarda scored again, fly-half Callum Sheedy claimed a try, while also adding five conversions.

It all added up to a spectacular blitz of 31 points after the home side had levelled things up at 21-21.

The Scarlets had their moments through tries from hooker Ryan Elias and full-back Johnny McNicholl, with Rhys Patchell booting three penalties and a conversion, but their European Cup campaign is over for another season.

The Scarlets showed a number of changes following a comprehensive defeat against Bordeaux-Begles last time out.

Bristol had a quartet of switches, including a first start since May last year for hooker Bryan Byrne, with Charles Piutau returning at full-back and Lloyd moving from wing to centre.

The Scarlets played just their third game since late October following players quarantining in South Africa – where they had travelled to play two United Rugby Championship games – and on their return home, before seeing games postponed either side of Christmas.

And they made a strong start, taking a seventh-minute lead through Patchell’s angled penalty, only to be ripped open in midfield by Lloyd’s brilliant break.

He did not require a second invitation to attack Scarlets’ defensive live, and he caused sufficient damage to send an unmarked Radradra over for a try that Sheedy converted.

Lloyd, who missed out on a place in Wales’ Six Nations squad, was at it again six minutes later, this time scoring himself after collecting flanker Chris Vui’s exquisite offload, and Sheedy’s conversion opened up an 11-point advantage.

Any thoughts of Bristol being in cruise control were soon dismissed however as Scarlets hit back through an Elias try that Patchell converted, before a sweeping move that heavily featured skipper Jonathan Davies almost resulted in another score.

Patchell’s second successful penalty reduced the arrears to 14-13, before Lloyd’s thrilling contribution came to an early end when he was forced off injured and O’Conor replaced him.

Bristol came under sustained pressure before the break, but they managed to prevent the Scarlets from making further in-roads and maintained a one-point lead.

Scrap that, this is Bristol at their best. Outstanding try! 🔥pic.twitter.com/FkJJwKPiFp

Patchell completed a penalty hat-trick just three minutes into the second period, but Bristol they had wiped out the deficit when scrum-half Harry Randall took a quick penalty.

Prop Kyle Sinckler then barged over the line, but replays showed he had been held up by Scarlets flanker Sione Kalamafoni, and the home side remained ahead.

But Bristol were soon back in front – and the Scarlets temporarily down to 14 men when referee Mathieu Raynal awarded them a penalty try after Elias appeared to knock the ball out of Randall’s grasp from close range.

Elias was yellow-carded as a result, yet the Scarlets responded brilliantly as Conbeer ran strongly into Bristol’s half before sending McNicholl over for a high-class score that made it 21-21 entering the final quarter.

Bristol went back in front just four minutes later when Thacker surged clear to touch down, and Sheedy’s conversion put them seven points clear, before a dazzling finish left the Scarlets chasing shadows.