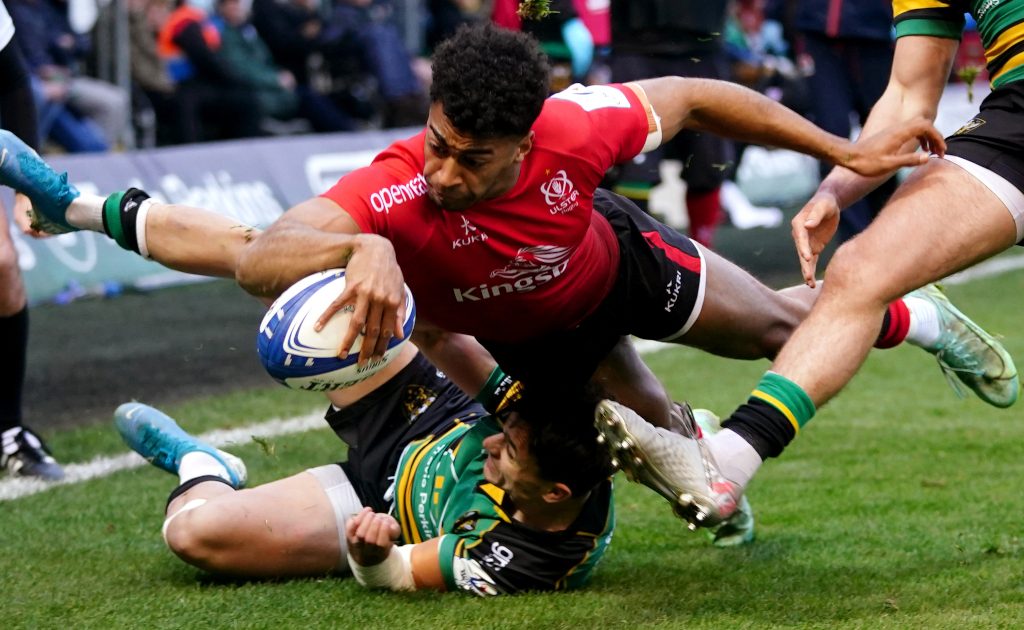 Ulster made it three wins out of three in the Champions Cup after they saw off Northampton Saints 24-20 at Franklin’s Gardens on Sunday.

Tries from Robert Baloucoune, Nathan Doak and a brace from man of the match Michael Lowry helped the visitors to a bonus-point victory on their travels.

With this loss, Northampton have just two points from their three games and with only a trip to Racing 92 to come, they have a mountain to climb to qualify.

Courtney Lawes led out Northampton on his 250th appearance for the club, but his side soon fell behind.

In the seventh minute, following a sustained period of pressure, powerful wing Baloucoune escaped the clutches of Furbank and Tom Collins to force his way over.

Worse was to follow for Saints when, seven minutes later, they conceded a second try.

They lost possession in their own half for Lowry to pick up and feed Baloucoune. The wing made 25 metres before his well-timed pass provided Doak with an easy run-in.

The home side needed a response and they got one when lock Brandon Nansen burst through a tackle from Marty Moore to start a flowing move which ended with Ulster conceding a penalty. Biggar duly split the posts.

Saints improved as the game progressed to reduce the arrears with an excellent try.

From inside his own half, Biggar sent out a long pass to Hutchinson, who took advantage of some poor Irish tackling to send Collins away. The wing made ground before sending Biggar over.

A minute before the interval, the visitors scored a crucial try.

Billy Burns chipped over the top for Lowry to seize the loose ball and score. The TMO was called into action to consider a suspicion of an earlier knock-on, but the try was awarded, which Doak converted for a 19-10 interval lead.

After the restart Biggar kicked a penalty, but Saints’ hopes dwindled when scrum-half Alex Mitchell was sin-binned for a deliberate offside after Lowry had threatened the home line with an explosive burst.

Biggar’s penalty was the only score of an evenly-contested third quarter, but it felt that Ulster had an extra gear and so it proved when Baloucoune’s pass sent Ethan Mcllroy away, with the wing’s inside pass giving man of the match Lowry a deserved second.

Mitchell returned from the sin bin, but Saints withdrew both Lawes and Biggar before Hutchinson scored an excellent solo effort with two minutes remaining to secure a valuable bonus point in defeat.

In the other game taking place at the same time, Bordeaux ran in seven tries to comprehensively beat the Scarlets 45-10 at the Stade Chaban-Delmas.

Louis Bielle-Biarrey scored a hat-trick and there were further tries from Cameron Woki, Geoffrey Cross, Maxime Lamothe, and Nans Ducuing to fire Bordeaux to a bonus-point victory. Liam Williams and Gareth Davies scored the only Scarlets tries.

Both sides were forced into late changes with three positive Covid cases in the Bordeaux side forcing Francois Trinh-Duc, and Maxime Lucu out of the starting XV with with Santiago Cordero having to cover at scrum-half, and Mathieu Jalibert starting at 10.

The Scarlets lost Scotland international Blade Thomson and prop WillGriff John in the warm-up. In came Morgan Jones at lock, and Samson Lee at tighthead prop, with Jac Price, and Harri O’Connor coming onto the bench.

Bordeaux enjoyed 57 per cent possession in the first quarter of the game and finally turned pressure into points. Wales full-back Williams failed to take a high ball, which allowed the hosts to move play from left to right. Jalibert and Cordero engaged in some interpassing, with a lovely inside ball putting Woki over for the opening try.

Jalibert added the extras, and Bordeaux were celebrating their second try just six minutes later. Bordeaux full-back Bielle-Biarrey sliced through the visiting side’s defence before turning the Scarlets inside out to score. There was some doubt over whether he had grounded the ball, but upon referring the decision to the television match official referee Karl Dickson awarded the try.

Jalibert converted and in the next passage of play Scarlets full-back Williams was sent to the sin-bin for cynically killing the ball at the breakdown. Bordeaux made the most of their numerical advantage with some tremendous handling putting Cros over at the far right-hand corner for their third try, with Jalibert converting from the touchline to give them a 21-0 lead at the interval.

Bordeaux started the second half in the same manner they had begun the first with a wonderful offload from Woki allowing Bielle-Biarrey to score. It took until the 51st minute for the Scarlets to get on the scoreboard. After enjoying a rare period of possession, replacement outside-half Rhys Patchell perfectly executed a cross-kick which was grounded by Williams.

But Bordeaux hit straight back when Cordero broke clear before drawing the final defender to put Lamothe over.

Scarlets claimed their second try when Patchell intercepted and offloaded to Davies who ran in unopposed from 70 metres out.

Bordeaux crossed for their sixth try with a stunning offload from Bastien Vergnes allowing Ducuing to brush off some weak tackling to score.

Teenage full-back Bielle-Barrey then completed his hat-trick with a straight run in from 40 metres, while the Scarlets ended the game with 14 men after Phil Price was yellow carded for illegally sacking a lineout.