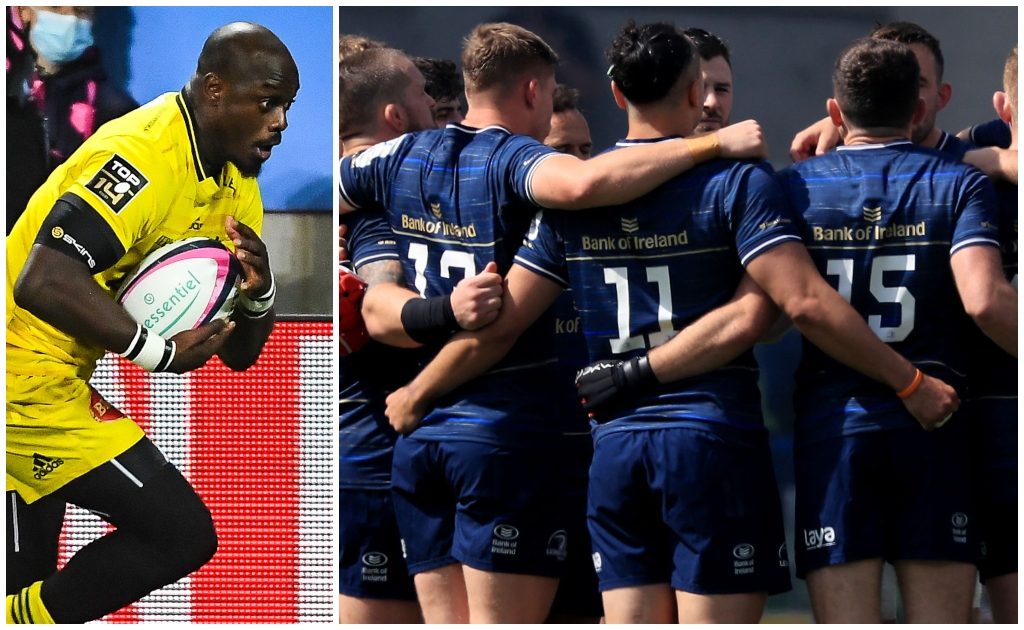 Now that the dust has settled on the Champions Cup semi-finals, we have gone through the action to pick the best players from the weekend’s games.

Unsurprisingly it’s Leinster who lead the way with eight representatives in our line-up this Monday, La Rochelle coming in next with five in the team.

15 Hugo Keenan (Leinster): Proving once again why he is one of, if not the best, attacking full-backs in the world, Keenan had a fabulous outing in Dublin where he was a constant threat as a sweeper and member of the backline. The Ireland international came four shy of 100 metres carried and scored a try at the close after scything through the fatigued Toulouse backline inside their 22. Keenan was unlucky to miss out on another potential score earlier in the game when he was the beneficiary of that long Tadhg Furlong pass leaving him with room to run. Thomas Ramos was instrumental for Toulouse in attack with 113 metres carried and 21 passes made to little avail as the game finished 40-17.

14 James Lowe (Leinster): Take a bow, James! The wing was a huge factor behind the monumental win, creating opportunities and positioning himself remarkably. Lowe scored two tries on the day, one from a well timed run on the shoulder of Johnny Sexton and one he dotted down in an acre of space after seemingly the entire Toulouse defence was suckered into a ruck under the posts. Lowe’s boot continues to be invaluable for Leinster as does his racehorse-like speed which is fantastic when chasing balls down field. Jimmy O’Brien, also of Leinster, only missed out because of the world-class performance delivered on the other side of the pitch by Lowe.

13 Garry Ringrose (Leinster): The fantastically quick balls from the Leinster ruck gave the backs space to work with and Ringrose seized this opportunity to create havoc outside of Robbie Henshaw. The outside centre ran well in attack, hitting space and came just shy of the try-line on a pick-and-go attempt for the whitewash. Ringrose also made seven tackles and turned the ball over once for the victors. Virimi Vakatawa earns himself a honourable mention for his efforts and try in Racing’s 20-13 loss to La Rochelle.

12 Robbie Henshaw (Leinster): Henshaw did it all for Leinster on Saturday with great crash-ball lines and brilliant defence. The other half of Leinster’s Ireland international centre duo was a human battering ram when needed as well as a capable passer in open play. Defensively, Henshaw put up an impressive 13 tackles in the 64 minutes he played at the Aviva Stadium in front of the sea of blue.

11 Raymond Rhule (La Rochelle): La Rochelle’s left wing is the only non-Leinster back in the squad this week after a solid yet unfortunate performance against Racing. The wing has a try disallowed early on but continued to impact for La Rochelle, even contributing a turnover for the visitors. Rhule will be faced with containing the elusive O’Brien in the Marseille final and a similar job to the one he did against Teddy Thomas will do just fine for La Rochelle fans.

10 Johnny Sexton (Leinster): A masterclass from the Irish veteran, who ran the show superbly on Saturday. He is obviously helped by having 14 fellow players of international quality around him but there is arguably no fly-half in Europe that can combine that control and creativity. Racing 92’s Finn Russell had more magic touches but he couldn’t quite ignite the Parisians’ backline as they struggled with their discipline. As a result, Russell got nowhere near displacing Leinster’s outstanding playmaker, who continues to defy his age.

9 Jamison Gibson-Park (Leinster): Despite one errant kick, which led to Antoine Dupont’s breakaway try, the first choice Ireland scrum-half was otherwise imperious. Yes, he is helped by a constant stream of quick ball given by his well-drilled pack but Gibson-Park still has to think at speed to keep Leinster on the front foot. The 30-year-old kept changing the point of contact as Toulouse struggled to work out how to stop the Irish province’s outstanding attack. Elsewhere, talented youngster Nolann Le Garrec started well for Racing, but faded as the game went on.

8 Gregory Alldritt (La Rochelle): Leading up to the 2022 Six Nations, there were suggestions that the number eight wasn’t in the best form, but he enjoyed an excellent tournament and has maintained that level at his club side. Alldritt was everywhere for La Rochelle on Sunday and was crucial to their semi-final victory, with his carrying and tackling playing a vital role in the win. He made 104 metres – a game high – and 14 hits – a team high – to see off the challenge of Yoan Tanga (Racing 92) and Jack Conan (Leinster).

7 Victor Vito (La Rochelle): Another one of La Rochelle’s barnstorming back-rows, the former New Zealand international was a consistent threat with ball in hand to take the place from Leinster’s in-form openside Josh van der Flier. Like with Sexton, age does not seem to be a barrier for Vito, who continues to be one of the best players in Europe. He ran for 84 metres from 10 carries and also made 12 tackles, which was second only to Alldritt.

6 Caelan Doris (Leinster): The third member of La Rochelle’s impressive loose trio, Wiaan Liebenberg, also made a significant case to be included, but we simply couldn’t ignore the work of Doris, who was superb against Toulouse. The 24-year-old was excellent with ball in hand, making 44 metres – usually in traffic – and equally did his bit in defence. Going into the final, Leinster have the edge in most positions, but the battle of the back-row is shaping up to be a particularly epic duel.

5 James Ryan (Leinster): Alongside Ross Molony in the second-row, the ever reliable Ryan gave a typical workmanlike performance that included soft hands that helped unlock the Toulouse defence. Finishing with 11 carries and eight tackles on the day, his 75 minute performance in a dominant Leinster pack did not go unnoticed.

4 Bernard le Roux (Racing 92): Mentions to the aforementioned Ross Molony of Leinster for his impressive performance at the Aviva Stadium while Rory Arnold also gave everything to the cause for Toulouse. However, we opt for Racing’s Le Roux here as he toiled hard in Lens, making 11 metres with ball in hand and 10 tackles. He, like Racing, will now hope to pick up some silverware in the Top 14 after this semi-final exit.

3 Uini Atonio (La Rochelle): The hulking tighthead is such a destructive yet smooth operator around the rugby field and we once again witnessed his qualities in La Rochelle’s triumph over Racing 92 on Sunday. The tight exchanges was one area La Rochelle got the upper hand and France international prop Atonio was at the heart of the onslaught both there and with ball in hand, with strong carries, offloads and slick passing game adding to his fine performance.

2 Pierre Bourgarit (La Rochelle): Few hookers really put their hand up over the weekend but for his part in La Rochelle’s dominance in the dark arts, we settled on Bourgarit. The busy hooker also chipped in with 10 carries for 13 metres as well as a couple of offloads as Ronan O’Gara’s key generals up front turned up at the crucial time in a scrappy European encounter.

1 Cyrill Baille (Toulouse): La Rochelle’s Dany Priso earns a mention for his part in dismantling Racing 92 up front but we opt for Baille, despite his Toulouse side going down to a tough defeat. His work at the scrum was excellent as Baille once again showed what a high quality loosehead prop he is. Around the field he finished with 19 metres from 11 carries and made 10 tackles in a typically industrious display.