Home Champions Cup Champions Cup Team of the Tournament: Leinster edge La Rochelle with just one other team featuring in our side 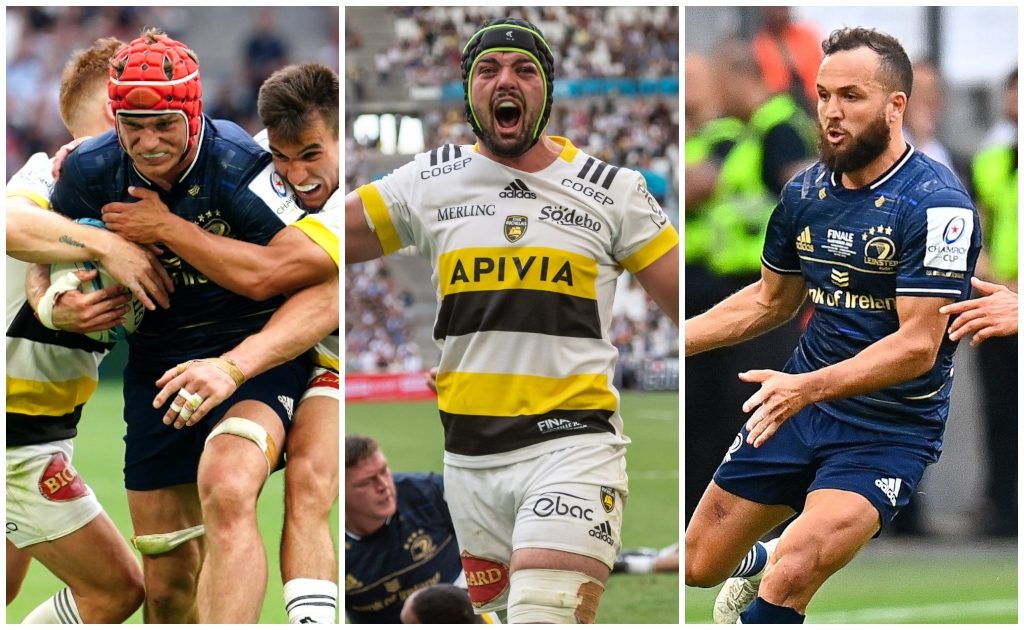 Now that the dust has settled on those special events in Marseille over the weekend, it’s time to pick our Champions Cup Team of the Tournament.

It is no surprise that 2022 finalists Leinster and La Rochelle have dominated our line-up, with the former contributing eight players to the latter’s six.

See what you think and remember to leave your own team in the comments.

15 Hugo Keenan (Leinster): As a regular fixture in our Champions Cup Team of the Week, Keenan practically wrote himself into the side. As one of, if not, the most well rounded full-backs in the world, Leinster’s 15 was a constant threat under the high ball and when slotted into the backline in attack. It should be noted that Keenan started all eight games, playing every single minute of rugby. Ulster’s Michael Lowry and La Rochelle’s Brice Dulin earn themselves honourable mentions for their exceptional play during the tournament.

14 Jimmy O’Brien (Leinster): O’Brien’s sheer class on Leinster’s right wing was often overshadowed by the performance of the fantastic James Lowe, but Leinster’s number 14 deserves praise of his own for his 583 metres carried (just 22 shy of Lowe). When called upon, he delivered with fantastic agility and finishing prowess, leading to his five tries throughout the competition. Despite Harlequins’ relatively early exit to the tournament, Louis Lynagh provided heaps of attacking spark while Teddy Thomas was invaluable for semi-finalists Racing 92.

13 Jonathan Danty (La Rochelle): The bulldozing French inside centre that is Danty impressed so much that we had to include him somehow, even if that meant shifting him to the 13 spot (where we have no doubt he’d also shine). For the victorious La Rochelle, Danty was a midfield menace and an unstoppable force as Johnny Sexton will begrudgingly tell you. Not only did the 12 attack well, but defensively Danty was a rock providing 49 crunching tackles over his seven outings. Garry Ringrose was almost equally as fantastic for Leinster, beating defenders left, right and centre.

12 Robbie Henshaw (Leinster): It’s no easy task to beat out Danty for a spot in any team, but Leinster’s versatile Henshaw did just that. Despite delivering thunderous carries from superbly timed lines, Henshaw’s awareness and skill in open space was also commendable, proving why he often gets selected as a 13 for Ireland when paired with Bundee Aki. The two-dimensional play of Henshaw, paired with his staggering consistency as a player, earns him the 12 jersey for this year’s side after edging out the victors’ fantastic centre.

11 James Lowe (Leinster): To no surprise, Lowe was a shoo-in for the left wing spot after leading the tournament in tries this season. Not only that, but his rocket of a left boot was an awesome compliment to Sexton’s right, forming a complete air-based attack for Leo Cullen’s men. Whether it be kicking, chasing, recovering high-balls or carrying, Lowe was near-perfect for the entire tournament and it’s because of this that La Rochelle’s Raymond Rhule only features as a honourable mention on this team, despite international call-up worthy performances for the winning side.

10 Johnny Sexton (Leinster): The old maestro rolled back the years this Champions Cup campaign as he helped steer Leinster to the final once again. Well rested by his province following his Six Nations efforts, Sexton turned up in big knockout game after big knockout game, particularly impressing in their semi-final win over Toulouse. He will no doubt be disappointed to miss out on the silverware but with a tournament high 83 points, Sexton gets in as our number 10.

The road to Marseille 🏆

9 Jamison Gibson-Park (Leinster): Joining Sexton in our half-backs is the New Zealand-born Ireland international. Gibson-Park was outstanding over this European campaign as he regularly flourished behind a dominant pack, building on an excellent Six Nations. Mentions go to La Rochelle nine Tawera Kerr-Barlow and Racing’s Nolann Le Garrec, who had strong seasons of their own but we can’t ignore the performances of Gibson-Park after a fine campaign.

8 Gregory Alldritt (La Rochelle): Another straightforward decision here as our number eight is the La Rochelle star. Alldritt has taken our breath away on several occasions and is up there with the best back-rows in world rugby right now following strong Six Nations and Champions Cup efforts. He beat the most defenders, made the most carries and had the second most metres to get in ahead of Jack O’Donoghue (Munster) and Zach Mercer (Montpellier).

7 Josh van der Flier (Leinster): If Alldritt was easy then Van der Flier was a walk in the park in terms of selection, with the European Player of the Year getting in ahead of La Rochelle’s impressive Victor Vito. The Leinster openside flanker made 25 tackles in the final and also topped the tackle count in the tournament on 114, while his work in the physical exchanges and open play were also of a very high standard. A Lions starter if the tour was today.

6 Caelan Doris (Leinster): Joining Van der Flier in that Lions back-row would most likely be his Ireland and Leinster team-mate Doris, who continues to grow as a player on the big stage. Unfortunately his performance in the final was not up to his usual high standards but take nothing away from his showings throughout the season. What a player? A mention goes to Wenceslas Lauret (Racing 92) but no one really came close to Doris, who has such a bright future.

5 Will Skelton (La Rochelle): Although he only played in four matches for the eventual champions, and missed their quarter-final and semi-final victories, the behemoth Wallaby was a crucial member of La Rochelle’s charge to the title. When he featured, Skelton caught the eye with strong ball carrying and also made his mark on defence. The 30-year-old defied the odds to put in an 80-minute shift in the final and was at the forefront of their forward onslaught which set up a solid platform for their dangerous backs.

4 Rory Arnold (Toulouse): Leinster’s Ross Molony was one of the Irish province’s best players as he played consistently well but we’ve opted for Arnold, who makes our team of the tournament for the second successive year. Another Wallaby, Arnold’s excellent lineout work was a crucial source of possession for the defending champions and although they bowed out to eventual runners-up Leinster in the semi-finals, Arnold can be happy with his all-round effort as he also did well as a ball carrier and on defence.

3 Uini Atonio (La Rochelle): Another player who makes our team for the second year in a row, the New Zealand-born France international was one of La Rochelle’s star performers as he played consistently well throughout the tournament. Atonio featured in all eight of La Rochelle’s games and the 32-year-old impressed with solid scrummaging and as a ball carrier. He beats out Leinster’s Tadhg Furlong and Dan Cole of Leicester Tigers.

2 Pierre Bourgarit (La Rochelle): Peato Mauvaka of Toulouse had some good moments but it wasn’t enough to come in ahead of Bourgarit, who did what was expected of him and more in La Rochelle’s front-row. The 24-year-old France international played in all eight of his team’s matches and caught the eye with some good moments on attack as he finished with 265 metres gained from 53 carries and was rewarded with two tries for his efforts. He also did well on defence as he completed 58 tackles.

1 Dany Priso (La Rochelle): The fourth La Rochelle player in our tight five, Priso will be happy with his performances which were of a high standard throughout the competition. Like Atonio and Bourgarit, he also featured in all eight of their fixtures and he did well in executing his core duties with his scrummaging particularly impressive. Priso caught the eye with some strong carries and was solid on defence, with Leicester Tigers captain Ellis Genge next best.