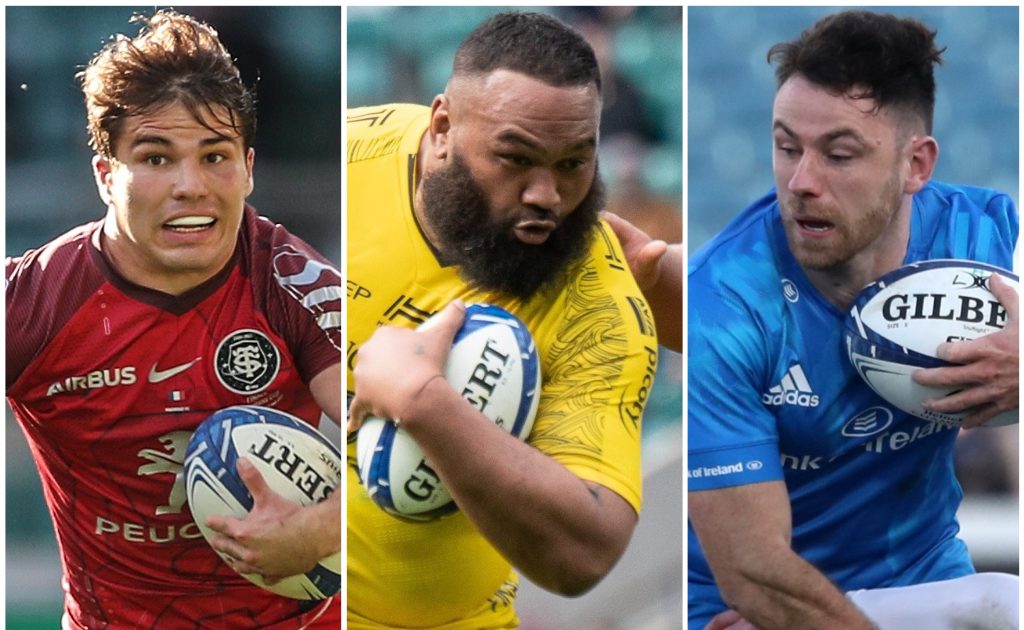 Now that the dust has settled on the Champions Cup, we have sat down to select our standout players from the 2020/21 European campaign.

Tournament winners Toulouse lead the way with seven representatives, while runners-up La Rochelle are next best with four players in our team with Leinster, Bordeaux-Begles, Exeter Chiefs and Racing 92 each providing one. Be sure to comment and also leave your own line-up in the comments section below.

15 Hugo Keenan (Leinster): Despite missing out on British and Irish Lions selection, Keenan put in several assured displays for Leinster, making an average yardage of over 60 metres per game. His assured presence in the air sees him take the place from the outstanding finalist Brice Dulin (La Rochelle) and the Clermont Auvergne brilliant Japanese superstar Kotaro Matsushima.

14 Cheslin Kolbe (Toulouse): The Springbok with the spring in his step is a modern day rugby treasure and he’s lit up Europe all year. Elsewhere, Clermont’s Damian Penaud appears to be over his injury issues and played with great pace and fire, whilst Dillyn Leyds took his opportunities well in a memorable season for La Rochelle.

13 Geoffrey Doumayrou (La Rochelle): Doumayrou may be a forgotten man of French international selection but the beefy centre was on the end of everything La Rochelle did well this season. Rory O’Loughlin was solid all campaign for Leinster, whilst Henry Slade also had some memorable moments running freely for Exeter despite their quarter- final defeat.

12 Kurtley Beale (Racing 92): The quicksilver Wallaby made the most clean breaks of any player in this season’s tournament and his attacking skills see him take the 12 shirt, as we believe that’s his best position. Elsewhere, Pita Ahki shone for Toulouse as they became champions for the fifth time, whilst Leinster’s Robbie Henshaw once again impressed.

11 Tom O’Flaherty (Exeter Chiefs): In the top three players of clean breaks, defenders beaten and tries scored, the uncapped Exeter man is pushing hard for international honours and deserves a place on the wing. Raymond Rhule, the former Springbok completes a duet of South African wingers in our nominations, joined by Leinster’s James Lowe who was excellent out on the flank in attack.

10 Matthieu Jalibert (Bordeaux-Begles): To witness the development of this young artist this season has been nothing short of remarkable and he was almost wholly responsible for dragging Bordeaux into the semis and almost into the final itself. He is the most complete number 10 in Europe right now and he takes the spot from his French rival, Romain Ntamack (Toulouse), with La Rochelle’s excellent New Zealander Ihaia West making up our triumvirate.

Just how incredible has he been in #HeinekenChampionsCup action this season?

9 Antoine Dupont (Toulouse): There’s few better rugby players in the world right now than the brilliant Dupont and again, his performance in the final separated two teams fighting to the death in a big game. Maxime Lucu was brilliant all year for Bordeaux Begles, whilst Tawera Kerr-Barlow ignited a lot of La Rochelle’s best moments behind his juggernaut pack.

8 Jerome Kaino (Toulouse): The 38-year-old Kiwi legend is still a force to be reckoned with and was calmness personified in the back-row of the champions while keeping his side going in a myriad of tight situations. His former All Blacks team-mate Victor Vito matched him blow-for-blow all year and it’s hard to separate them while Jack Conan’s big display in the semi-final defeat for Leinster against La Rochelle earned him a Lions place becoming our third pick.

7 Francois Cros (Toulouse): With the other two back-row places nailed down at Test level for France, Cros’ return to form might just see him return to the openside for Les Bleus. La Rochelle’s Kevin Gourdon, his opponent in the final, might not have the pace of old, but his canny displays see him get a shout out with Josh van der Flier of Leinster also excellent all season.

6 Gregory Alldritt (La Rochelle): You can play this guy in any position across the back-row and he’ll give you a world class response. He was La Rochelle’s tireless workhorse during their time with 14 players in the final and he sees off the powerful Exeter Chief, Dave Ewers, with the abrasive Rynhardt Elstadt of Toulouse also making an impact all season.

5 Rory Arnold (Toulouse): Arnold is the quiet professor of the set-piece and a key leader for Toulouse. Add in some galloping charges and a powerful display in the scrummage and he sees off Exeter’s Jonny Hill – whose displays earned him a Lions call-up despite a quarter final loss – and the excellent Devin Toner of Leinster.

🌟 Toulouse can now add a fifth star to their jersey. #SRvST

4 Will Skelton (La Rochelle): The Wallaby is looking lean and mean and the big Samoan-Aussie was outstanding in gaining momentum throughout the season for La Rochelle. Clermont Auvergne’s Peceli Yato was outstanding all season, whilst Donnacha Ryan was at the centre of all of Racing 92’s adhesion up to their quarter-final exit.

3 Uini Antonio (La Rochelle): Antonio is looking powerful, marginally more mobile and he made use of all of his bulk to destroy every scrummage he faced this year. Antonio comes in ahead of New Zealand World Cup winner Charlie Faumuina, who was his usual solid self for Toulouse.

2 Julien Marchand (Toulouse): Despite missing the final due to suspension, Marchand is the complete footballer, with a peerless set-piece and some serious gas in the loose. Paul Boudehent was in the middle of a massive La Rochelle scrummaging effort, whilst Peato Mauvuka deputised well for Marchand and deserves a shout out for his solid display in the final.

1 Cyril Baille (Toulouse): Baille was absolutely brilliant in the final and on another day may very well have been Star of the Game, coping all day with a man 35kgs heavier than him and running his legs into the ground. Jefferson Poirot went well all season fusing a starting place with an impact role for Bordeaux-Begles and was his usual jacking and tacking self, whilst Danny Priso made some telling runs and powerful drives in his usually impressive displays for La Rochelle.