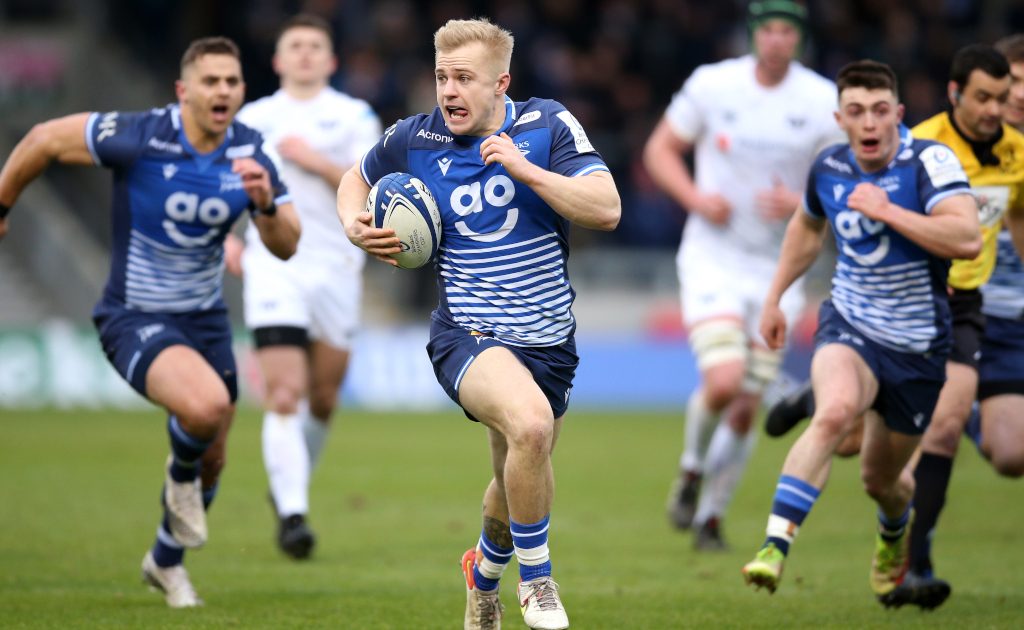 An impressive Sale Sharks ran in seven tries as they beat the Ospreys in their final Champions Cup pool clash, winning 49-10 at the AJ Bell Stadium.

The hosts were dominant throughout but the first 20 minutes laid the platform as they overpowered the Welsh, with Tom Roebuck’s try opening the scoring.

Although the Sharks missed several other try-scoring chances, Arron Reed went over to give the home side a 14-3 lead at the interval in Salford on Sunday.

Ewan Ashman and Dan du Preez then sealed the bonus-point before Harri Deaves got one back for the United Rugby Championship side.

It proved to be just a consolation score, though, as the hosts crossed the whitewash three more times through Curtis Langdon, Roebuck and Jack Metcalf to confirm the Ospreys’ European elimination.

With Sale’s passage into the last-16 already assured, their aim was to find the type of form which has so far eluded them in the Premiership and they started with plenty of intent.

The power was far too much for the visitors and they created several chances in the opening quarter, but only one was taken.

Reed had a score ruled out for an illegal clearout while both Rob du Preez and Lood de Jager knocked on over the line, which meant Roebuck’s try was the hosts’ only reward for their dominance.

It is that type of profligacy which has cost them in recent matches but they were in such control that it ultimately did not matter on Sunday.

Alex Sanderson’s men were in the ascendency in both attack and defence, and it led to a second try as Reed finally got his moment.

The left wing was indebted to the work of Ben Curry and Bevan Rodd, however, as the flanker turned the ball over at the breakdown and gave the ball to the England prop.

Rodd sprinted clear and then showed outstanding skill to find the speedster on the outside, leaving Reed with the easy task of touching down unopposed.

The Ospreys had barely been in the Sale half but they finally built some pressure when Dan Evans scythed through the home side’s defence.

Evans was brought down short of the line but they kept going through the phases and eventually earned a penalty which was kicked by Joe Hawkins.

Sam Cross unfortunately went down with a nasty-looking injury in the build up to that score and was stretchered off.

There had been a high attrition rate in the first half, with a number of Ospreys players going off for head injury assessments, while Sale’s Nick Schonert was replaced after suffering a lower leg injury.

With the Welsh region having an already depleted squad, it only hampered their chances further and they duly struggled in the second period.

Five minutes after the break, the Sharks extended their advantage thanks to a close range Ashman effort before another fine move ended in Dan du Preez sealing the bonus-point.

To the visitors’ credit, they continued to battle and were rewarded when Deaves touched down on debut, but it was not enough to spark a comeback.

Instead, Sale crossed three more times in the latter stages as Langdon, Roebuck and Metcalf all went over to complete a dominant win.

A last-gasp penalty from Joris Segonds kept Stade Francais’ hopes of qualifying for the Champions Cup last 16 alive as they beat Connacht 37-31 in Paris.

The French club face a nervous wait to see if other results go their way, while Connacht had already qualified for the knockout stages.

Connacht led for most of the game but tries from Adrian Lapegue (two), Ngani Laumape, Kylan Hamdaoui and Ryan Chapuis, along with 12 points from the boots of Segonds and Nicholas Sanchez got them over the line.

The visitors quickly found their rhythm and began to apply pressure in the Stade Francais 22, and after several powerful carries a cross-kick from Sammy Arnold was taken by Wootton. The wing showed tremendous footwork to dance past two defenders before showing his power to score the opening try, which Carty converted.

Sanchez put Stade on the board after 17 minutes with a regulation penalty after Connacht were penalised at the proceeding scrum.

Stade Francais then flexed their muscles with a move straight from the training ground. The hosts won the lineouts, and a lovely inside pass from William Percillier sent Lepegue clear, with the left wing finishing brilliantly at the far corner.

Sanchez converted, but Carty levelled the scores from the kicking tee before Stade had a try disallowed. Leo Barre looked to have scored but the television footage showed Australia international hooker Tolu Latu entering a ruck with no arms. The try was chalked off and Latu was sent to the sin bin.

Connacht made the most of their numerical advantage with their lively number nine Blade sniping over from short range following a well-worked driving lineout by the visitors. Carty added the extras and Connacht held a 17-10 half-time lead.

Stade scored within two minutes of the second half with a terrific break from Sanchez opening the Connacht defence. The Argentinian playmaker drew the last defender to put Laumape over at the far right-hand corner.

The French side’s hopes then suffered a major setback when Latu was sent off in the 46th minute after receiving a second yellow card for swearing at referee Wayne Barnes.

Connacht made them pay almost immediately with Farrell making the most of a wonderful offload from Arnold to score their third try of the match.

But Stade were not prepared to throw in the towel as Hamadaou exposed some weak defending to score.

However, Connacht claimed their try bonus point soon after with Butler finishing a brilliant attacking move.

Stade Francais came straight back to make it a one-score game again when Chapuis scored out wide after a quickly taken penalty. Segonds converted, while Connacht flanker Conor Oliver was sent to the sin bin for a professional foul.

The hosts took the lead with just five minutes to go with a long pass from Segonds allowing Lapeque to turn inside for the score, and Segonds then slotted over a last-minute penalty to keep their hopes alive.